Francis Heaney had last week’s AVCX Meta puzzle, “Well-Connected”. Let’s figure out what was going on with that now that submissions are closed. 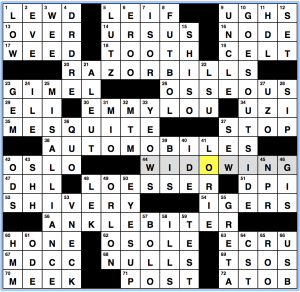 Another week, another meta I’m mad that I overthought.  This one earned its full 5/5 on the difficulty scale, though the grid was pretty smooth sailing.  Let’s look at the relevant theme clues: 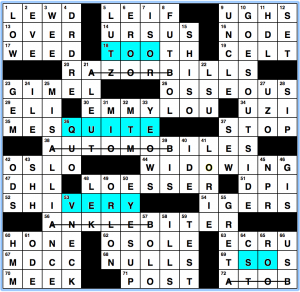 Simple enough.  Connecting the A to B combinations in the grid (of which there are only the four) gives you a grid that looks like what appears to the right of this text.  Above each line, you have the words TOO, QUITE, VERY, and SO showing up.

Per the instructions of the puzzle, we’re looking for “a current slang phrase (9,6) that describes someone who’s well-connected, in a sense.  I got hung up on trying to figure out something that worked with OVER – after all, we have words that feel like synonyms OVER a line.  I should have been thinking ON, since all of these words could have a fifth synonym of EXTREMELY, ON LINE.  EXTREMELY ONLINE is definitely a (9,6) phrase used to describe someone who’s in tune with what’s going on across the internet.  I would know, since the podcast I co-host titled last Wednesday’s episode “Extremely Online”.  I’ve literally been staring it in the face all week and yet it eluded me when I was working this out.  Cue lots of UGHS on my part when I realized this was indeed the answer earlier today.

I might have overthought this one, but I’m in awe on the construction here.  There are a few interesting choices in across fill — URSUS, O SOLE, MDCC — but it’s pretty solid throughout.  LEWD, OSSEOUS, LOESSER, GOES OUTSIDE, MISALLIANCE – there was a lot to LEK (sorry, like) here.  Hopefully you felt the same way!