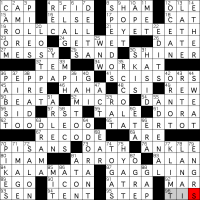 hello and welcome to episode #567 of matt gaffney’s weekly crossword contest, “The Leftovers”. this is week 2 of gentle april. after last week’s 13×13, we have a supersized 17×17 grid this week, although matt claims that is coincidence rather than any kind of make-up. anyway, what are the theme answers? there are eight 8-letter across entries in the grid:

the first thing to note is that each of these answers has a single letter repeated four times. those repeated letters, taken in order, spell out… LEPSOTAG. that is very unlikely to be the answer to the meta, since it’s, uh, not anything.

what else can we do? well, the title suggests looking at the leftover letters other than the letter that appears four times. so that gives us ROCA, YTTH, EAIG, CIOR, TDLE, AERO, KLMT, and ALIN. this is not an inspiring list either, as only ROCA and AERO are word-like. but look at KLMT! that looks a lot like painter gustav KLIMT, who’s in the grid at 77d. now we’re onto something!

it turns out that each of these leftover tetragrams has a corresponding five-letter entry elsewhere in the grid which has all four of those letters, plus one more. most of them (KLIMT being the notable exception) involve a rearrangement of the four letters. let’s take a look:

taking the extra letter from each of these, in order, reads MAMMA MIA, which is a thing, and the answer to the meta. just to check, the instructions ask for something you might say while struggling with a tough meta, so this qualifies.

was this easy enough for a week 2? (here we go again.) yeah, i guess it was. there were more steps than a typical week 2 meta, but each of them was pretty clearly indicated, and the title was certainly a part of that.

more importantly (at least to me), this was just a great meta. the solution path was not so obvious as to be insulting, and there were several successive ahas, all of which were quite satisfying. i’m glad matt decided to make this a 17×17. not only does that make it a lot easier to fit eight theme answers in (arranging them in four pairs, each pair occupying a full row with a black square separating them), but it also gives the grid breathing room to accommodate the eight extra hidden 5-letter theme entries. even in the northwest and southeast corners where thematic 5s were stacked crossing a thematic 8, the fill didn’t suffer. ENGRS isn’t ideal, but really nothing else around there even comes close to being ugly fill.

this is a really nice construction all-around. although the final answer doesn’t have any particular appropriateness for this meta mechanism, it’s still fine and good. i’m a little surprised that it ended up having so many M’s; i wonder if matt chose the answer among lots of different options, or if that’s just what ended up working out.

that’s all i’ve got this week. how’d you like tihs one?