We’ve seen a number of themes based on the Tinder phrase SWIPE LEFT (and “swipe right”) in different venues. Not sure that we’ve seen this one.

Synonyms for “swipe” (in the sense of stealing) are found in the circled letters going right to left, which we learned from the clue [Reject online, and a hint to the circled boxes in this puzzle]. 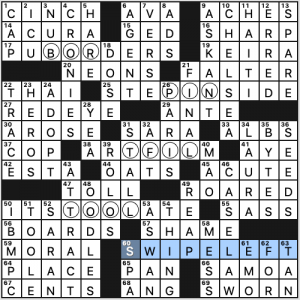 It’s also slightly inelegant to use a plural (PUB ORDERS) when one isn’t absolutely necessary. There are a number of other possibilities for “rob,” the best one I found being PLACEBO RESPONSE, an interesting grid-spanner. That could’ve gone in the middle. ART FILM could then have been replaced with SHORT FILM, ADULT FILM, or CHEST FILM in the upper left.

But aside from all that, the theme works nicely.

The top half of the grid seemed to fall much more easily even though I started off badly with SLICE instead of CINCH for [Piece of cake] at 1a. The cluing in that southwest corner definitely seemed a skosh more difficult.

Favorite bit of fill has to be OODLES followed by CRONIES, CASE LAW, and RED-EYE with a lovely [Fly-by-night choice] clue. Nice to see PARIS in the grid after yesterday’s horrific event.

I’ve never seen any work by CHELSEA [Handler of comedy], but I know the name. And I have to look askance at ASKANT. Can anyone give me an example of using that rather the much more popular “askance”? HEROS, too, looks hinky, but Merriam-Webster singles out the sandwich as having that spelling for its plural. And I object to the clue [It’s a wrap] for SARAN. SARAN is a brand name for a kind of plastic wrap, and nobody (that I know of) ever uses it without being followed by “wrap.” Saran Wrap is a wrap; SARAN is the name of a kind of wrap.

And that’s all I have. Mostly, this is a solid, workable puzzle. 3.5 stars.

If you didn’t get your taxes done yesterday and haven’t filed an extension, well, I’m afraid IT’S TOO LATE. 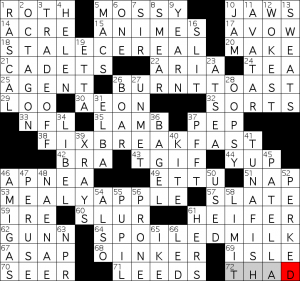 hello, joon here filling in with the writeup of the wednesday new york times. we’ve seen alison’s byline in the times once before, on a sunday, also a collaboration with erik. today’s puzzle was daily-sized (well, almost—it’s a 16×15 grid), and it felt more like a tuesday than a wednesday to me. the theme is given in the middle with 38a: {Plea concerning the menu in 18-, 26-, 53- and 64-Across?} FIX BREAKFAST. those breakfast menu items that need fixing are:

[insert joke about the “breakfast test” here if you want.] here’s what i think is going on with the theme, and i apologize in advance if i’m missing something or under/overthinking it, because i have to say i don’t quite get it. the reveal answer is a play on the usual sense of “fix” breakfast meaning to prepare a meal. instead we have these obviously deficient breakfast items… but there’s really no way to fix them. there’s no way to make stale cereal or a mealy apple fresh again, or to unburn toast, or unspoil milk. you just have to throw it all out. maybe you could have some {Song one loves, in modern slang} JAM and {Ingredient in a melt} TUNA FISH on a {Roll with a hole} BAGEL instead. (okay, no, that’s gross. hold the tuna.)

unless there’s some additional wordplay meaning i’m not seeing (wouldn’t it be amazing somehow if you could, i dunno, anagram the theme answers into actually good breakfast items?), i have to say the punchline missed me on this one.

the grid, on the other hand, was rather nice. it’s an unusual structure, with the central 12-letter answer requiring a 16-wide grid, and even then the four corners have to have some stacked long answers. i enjoyed {Most socially conscious} WOKEST and {Dance done to the 2015 hit “Watch Me”} NAE NAE and {Sacrifice of square footage for location, e.g.} TRADE-OFF. even {Veronica ___, author of the best-selling “Divergent” series} ROTH gets a much more contemporary clue than the fusty ira clue i’m used to seeing; that book series was huge enough that it impinged on my consciousness even though i don’t really read young adult fiction and my kids were too young at the time to be into it.

the most topical clue for me has to be {N.B.A.’s Young, familiarly} THAD young of the pacers, currently battling the boston celtics in round 1 of the eastern conference playoffs. he’s had a sneaky-good career, but hardly a household name except among hardwood junkies.

that’s all i’ve got. how’d you all like this one?

Rich Proulx’s Universal Crossword, “Ahead of the Pack”—Judge Vic’s write-up 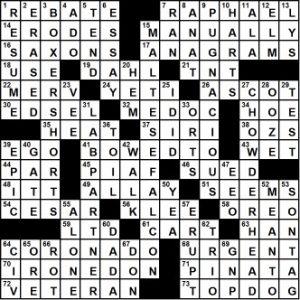 Certain animals are at times found in packs, right? And if we’re focused on something being ahead of the pack, then we just might stumble onto  …

There is a certain charm in the looseness of this theme. We have three nounal phrases, a stand-alone noun, and an adjective. In 3d, 15d, and 31d, the dog is discrete. In the other two, not so much. Boxer and lab, as clued, have nothing to do with their canine counterparts. But the Maltese Falcon’s name derives from the same geographical location as a Maltese dog. Did the word pugnacious come from the dog, vice versa, or otherwise? You get the point. Rich and David were not concerned with tightness here. They were concerned with volume of theme and with having their dogs, not just in front, but on top! This they accomplished. Nothing wrong with that.

It is an often-done theme, this doggie-dog world thing. I can recall solving several, with and without reveals, where boxer shorts, poodle skirt, and lab coat were key themers. Two such puzzles ran within a short time of each other in 2004–one by Peter Abide in the New York Sun and one by Stan Newman in Newsday. Kudos to Rich for branching out from that nucleus. And for coming up with a  non-clothing twist on the theme.

In the Across answers RAPHAEL MANUALLY IRONED ON ANAGRAMS, in CORONADO, perhaps, and BOWED TO URGENT VETERAN SAXONS … with a PIÑATA. 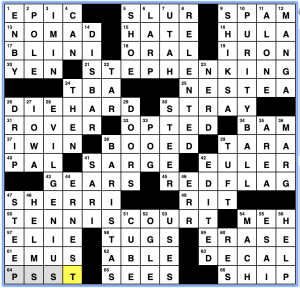 After two straight weeks of metas, it feels weird to be talking about the AVCX on Wednesday again.  Aimee Lucido has this week’s entry, “Boat Trailer”, so let’s see how seaworthy this grid is:

This is…fine.  I don’t love how removing SHIP and placing it elsewhere in the grid seemingly strips the fun out of the goofy theme answers by breaking them into bits.  STEPHEN KINGSHIP, DIE HARDSHIP, RED FLAGSHIP, and TENNIS COURTSHIP are all lovely phrases, and making SHIP a trailer neutered their impact.

Not going to lie – I found this one kind of MEH overall. 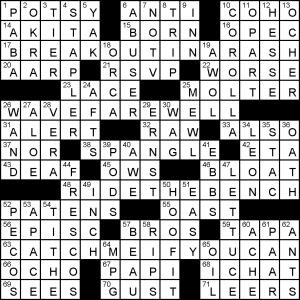 I enjoyed the theme concept more than most early week concepts. Perhaps because it was a little subtle and a little offbeat. The revealer is an idiomatic phrase, as well as the film it was clued as. I had no idea that Spielberg was involved in CATCHMEIFYOUCAN, but then I haven’t watched it and don’t know much about it except “Leonardo DiCaprio plays a conman”. Unlike typical words that follow themes, this one requires an “a” each time: CATCH(A) – BREAK, WAVE and RIDE. I think the extra specificity here makes the theme stand out a bit from a lot of others of this type.

It’s not normal to start a Wednesday with a mystery, but I had no idea POTSY was hopscotch. I only vaguely knew there was an American game by that name; as far as I’m concerned, POTSY is one of the Happy Days teeners.

It wasn’t a particularly demanding grid, with four entries, albeit they are 15s and 12s. Nevertheless, the fill shows signs of strain, particularly in the top-right (COHO, contrived MOLTER??) and bottom-left (PATENS, EPISC, and APACE). I can’t see any easy fix to make that area easier to fill – it’s a consequence of the 3 black squares needed to fit those awkward 12s in.