My apologies for missing the LAT post yesterday – I added it to the Sunday writeup.

Tennis, anyone? Tennis, everyone! 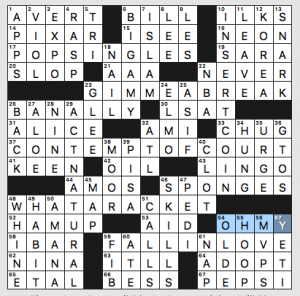 The weakest theme entry is 17a, which is a shame, because it sets the tone for the puzzle and the rest of the theme is so much better.

Vaguely tennis-related factoid (or straight-up theft from Ade’s “Sports WILL Make You Smarter”): Sunday’s NYT Book Review includes an interview with Abby Wambach, who says that Andre Agassi’s memoir “Open” gave her the freedom to write her own story.

And the answer to 59a gave me an earworm. Why should I suffer alone?

(the first video I found had the title as “Author’s Theme.” Proofread, people)

The judge has recused himself from a critique of today’s Universal. I badly want to use the word ENBANC in some sort of pun right now, but I’m sure I’ll flub the meaning… so let’s just say it’s his puzzle. 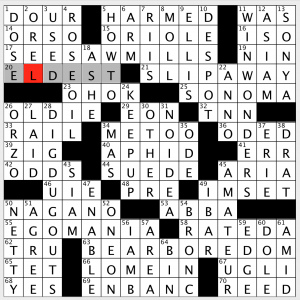 THEME: Wacky entries are created by adding the present tense of a verb (found in the base phrase) to the beginning. I found that much harder to articulate than it should’ve been.

“Dagnabbit!” I feel like I made every mistake I possibly could in this puzzle. Including my initial answer for “Dagnabbit!” (I had DARN instead of DRAT). OLDEST for ELDEST, MAIMED for HARMED, SONJA for SONYA, SURE for OH OK, and what felt like a host more. Plenty of gimmes to get me on track- (Thanks NIN Anais and Vietnamese New Year!).

Fun theme, though I didn’t fully grasp it until the end. I thought perhaps it was a “before and after” type theme with SEE SAWMILLS (Seesaw and Sawmills). Or perhaps a video game theme with DIG DUGOUTS. The title is key here: Present and Past. Silly me. Often when I don’t see the theme until the end, the puzzle doesn’t sit right with me… this was definitely more of a “I should’ve figured that out earlier than I did” kind of feeling. It’s unique and clever wordplay that I can’t recall seeing before, and I enjoyed the “Aha!”

With the word count maximized at 78, there are still enough ILSAs in there (that’s the judge’s term btw. “In-Language-Stand-Alone entries.”) to keep it lively. EGOMANIA, SLIP AWAY, ME TOO, I’M SET, and KEEP UP to name a few.

I am surprised that with only four 11-letter themers that the word count is as high as it is, leaving the middle section somewhat choked off.

But I’m always going to rule in favor of the judge. 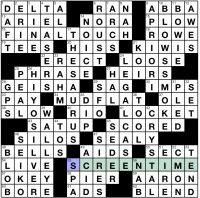 Always excited to see a Burnikel Monday! Let’s see what she has in store for us today:

A fun, strong, and clear Monday theme. Each themer ends with a word that can be combined with SCREEN: touch screen, flat screen, etc. I also liked the variety of theme answers – smoke screen and silver screen are certainly different than the iPad or TV screens we’re used to considering. Otherwise, the puzzle’s fill was pretty clean. I wouldn’t have initially spelled OKEY that way (maybe okie?), but the crossings were fair. In contrast, I did appreciate the timely SEDER in the puzzle!

We have a LEAK at 73a: [Anonymous disclosure, and a problem at the end of each starred answer]. Each of the answers to the starred clues ends with a word that has to do with plumbing. 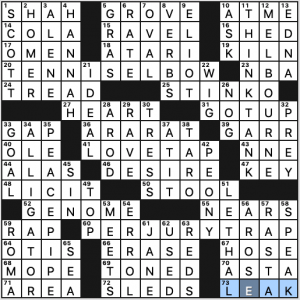 The revealer clue also says there’s a LEAK at the end of each answer, and I’m not seeing how that is represented. I guess those are all parts of a plumbing system that could LEAK? Maybe? But the wording would seem to indicate that there’s a drip or water draining from those words somehow, but I don’t get it. I may be overthinking it, but if there’s nothing else to the theme, then the wording of that revealer needs some adjustment.

Questions regarding the revealer aside, the themeset is nicely put together. Each keyword is changed in meaning more or less, and each entry is solid and interesting. I recently replaced a kitchen sink, so this puzzle brought back memories of that daunting task and my eventual LEAK-free success, so I’m good with both plumbing and this puzzle.

This is a nice grid, eh? I’m liking MELBOURNE, ALLIGATOR, ARARAT, GENOME, STINKO, and HANNAH. And for the most part, the short and mid-range fill felt clean as well.

Clues were Monday-straight, so there’s not much to comment on, but I found it interesting that at 43a [90 degrees from WNW] the Ns in the clue and the answer, NNE, all stand for North. That’s a slight dupe that we don’t usually see. 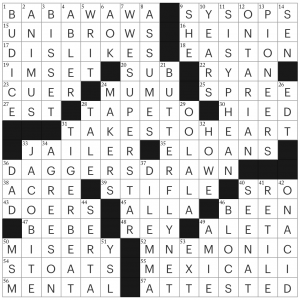 KAC has this Monday’s New Yorker puzzle and it was a chewy one, taking me about 3-4 minutes longer than the last few Monday puzzles, which was nice.  Let’s dig into what made this grid tick:

ONTARIAN Shania Twain, who did the whole country-pop crossover before Taylor Swift did

A great grid (seriously, just look at that grid pattern of black squares) from KAC, and a fantastic start to the week.

I’m surprised I got through this one with a slightly better-than-average time, being that there was plenty I’d never heard of. Leave it to BEQ to broaden your vocabulary.

The east side of the puzzle was much more difficult for me. Seemed like a lot of proper nouns intersecting.

It’s a credit to the constructor that I was able to infer all the things I didn’t know. Still, I like it better when I’m somewhat more confident with my answers.