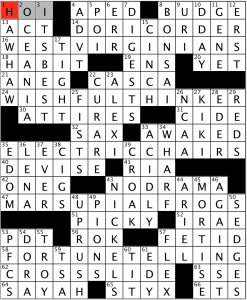 Let’s get right to this unusual 14 x 17 grid, shall we? Can it help us find the novelist who is the final answer to this puzzle?

Lots of rabbit holes and red herrings on this one — could the novelist also be 14 letters, and each entry hints at one of his/her/their works? Turns out, no — the title is a hint: THE Works, namely, works of literature/art/theater that begin with The. So we have:

The VIRGINIANS, a novel by William Makepeace Thackeray
The THINKER, a sculpture by Auguste Rodin
The CHAIRS, a play by Eugène Ionesco
The FROGS, a play by Aristophanes
The TELLING, a novel by Ursula K. LeGuin

Take the first letter of each author’s last name (or in one case, only name) and you get: TRIAL. Put a THE in front of that, and you get The Trial, a posthumously published novel by Franz Kafka, the novelist who is the final answer to the puzzle. I hadn’t heard of the Ionesco play, or (I admit) the LeGuin novel, and I imagine this meta would be quite hard to crack for many — so I’m giving this 3.5 Metaweeks on the Gaffney Scale.

I was scrolling through the tweeters on Saturday afternoon whilst taking a break from Seder prep, and lo:

Good thing nobody who solves crossword puzzles is on twitter!

Guess what? I got a fever, and the only prescription is more cowbell. So let’s let [11d: Fictional cowbell player Frenkle]: GENE play us out.