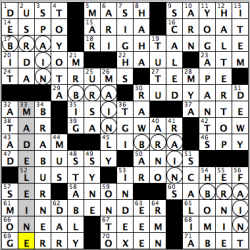 Good day, everybody! Here is hoping you’re all doing well! Today’s crossword puzzle takes the brain for a spin, as circled letters in the grid form a RIGHT ANGLE (18A: [90-degree turn featured in this puzzle’s theme]) in four different sections and, when filled, the word “brain” is formed. Given the twisted nature to how the word appears, we have MIND BENDER as the other reveal entry, and that phrase is now reminding me of the G.I. Joe villain Dr. Mindbender and, in turn, taking me back to when I was a wee lad and watching cartoons (61A: [Hallucinogen…or an apt title for this puzzle!]).

The long fill in today’s grid was very sartorial in nature, from BRA BURNER (34D: [Women’s rights participant in a 1960s bonfire]) to HALTER TOP (12D: [Shoulder-baring blouse]) to YOGA PANTS, something I’ll never invest in even with my increased participating in yoga due to being a chaperone at a summer youth camp which features a morning yoga class (11D: [Garment you might wear while doing the Downward-Facing Dog]). Thank goodness that I had a working memory of some of the things and concepts hit on in Remembrance of Things Past to know MADELEINE pretty quickly (33D: [Little cake immortalized by Proust]). Man, I hadn’t come across any reference to MYA in a good long while before doing this puzzle, as she was the “it” singer for a hot minute after “Ghetto Superstar” got a lot of rotation (28D: [One-named singer of “It’s All About Me”]). I’m probably the only person who thought of John Vernon’s role as MR. BIG in the 1980s blaxploitation comedy/spoof, I’m Gonna Git You Sucka, when filling in that entry (21D: [Underworld boss, slangily]). If anyone else knows what I’m talking about and/or has seen that movie before, then you’re immediately awesome!

“Sports will make you smarter” moment of the day: ESPO (14A: [Bruin Phil, to fans]) – When “The Great One,” Wayne Gretzky, scored a mind-boggling 92 goals in the 1981-82 season and shattered the NHL record for most goals scored in a season (a record that still stands to this day), the player who held record beforehand was “ESPO,” former Boston Bruins great Phil Esposito, who scored 76 goals in the 1970-71 season in becoming the first player to score at least 70 goals in a season in National Hockey League history. After his Hall-of-Fame career ended, Esposito was instrumental in bringing professional hockey to the state of Florida, co-founding the Tampa Bay Lightning in 1992.

The moment I see Erik Agard’s byline, I know I’m ready to marinate in a great puzzle. Let’s jump in! 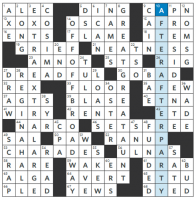 “Doubling Down” is right! The first two words of each lovely themer are the same, and they’re all downs (instead of the more traditional across) to line up with the title. I dig it, especially with how clean, crisp, and fresh the grid is while containing 58 theme-related squares!

What I loved more about this puzzle is how it had more moments of representation for the black/African American communities than most puzzles I’ve seen lately combined. In this puzzle alone, we have AFRO, Beale Street as one of the referenced STS, Spike Lee’s “Do the Right Thing” as a way to clue SAL, “Girls Trip” actress and comedian REGINA HALL, Leslie Jones as the reference point for SNL, and WEAVE. What is important for constructors (including myself) to notice is that so many of these references and representations were made possible via inclusive cluing. STS, SAL, SNL, and WEAVE could have all been clued in other, non-representative ways, but they weren’t.

More cluing and fill like this as a way to represent folks from underrepresented groups would be fantastic! If you didn’t like this puzzle as much because it didn’t represent you as much as every other puzzle always does, think about how regularly folks from underrepresented groups might crave even one bit of representation or one moment of inclusion in the puzzles they love to solve.

Case in point: I was recently solving a back stack of recent puzzles and came across a clue for ELIO in a Peter Gordon puzzle that was simply [Oliver’s lover in “Call Me By Your Name”]. To see gay love (and sexual at that!) clued as straightforwardly and matter-of-factly as it was stopped me dead in my solve out of sheer joy and astonishment. Is it crazy to say that it’s one of the only times I’ve really felt seen in mainstream crosswords lately? That one little clue could do so much for me as a queer person is just an example of how meager the bits of representation are of non-white/cis/straight men in puzzles. How much richer the solving experience would be for a larger community if there were more representation and inclusion! Thank you, Peter, for that clue. And thanks, Erik, for today’s great puzzle!

Other tidbits I loved in this puzzle: XOXO, Meryl Streep as a reference for OSCAR, and BAE. What a fun solve! 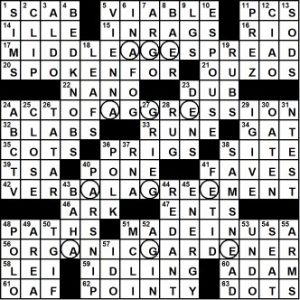 Ed wastes no time in establishing this theme, giving us the reveal right up front:

Notwithstanding this 15-15-15-15 theme, Ed manages a couple more nice ILSA’s in the horizontal lineup:

and more in the vertical arena:

The above fill excellence seems to have come at a small price–a slightly disproportionate number of plural nouns and singular verbs: PCS, OUZOS, BLABS, COTS, PRIGS, etc., but that did not take away from my enjoyment. 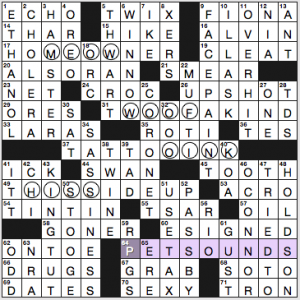 Cute theme. The PET SOUNDS revealer is clued: 64a. [Beach Boys album with the hit “Wouldn’t It Be Nice” … or things hidden in 17-, 31-, 37- and 49-Across]. And the circled letters in HOMEOWNER, TWO OF A KIND, TATTOO INK, and THIS SIDE UP spell out a cat’s MEOW, dog’s WOOF, pig’s OINK (there is actually a pet pig living in my urban neighborhood), and a … snake’s HISS, or maybe also a cat’s. 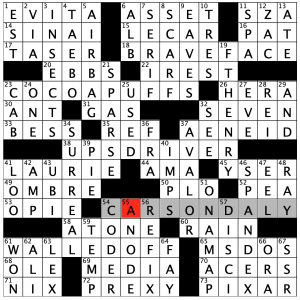 I literally laughed out loud at the theme answer at 38A! We have a movie themed puzzle today, with the revealer at the very end:

I put the movie titles in red to better explain the theme. Like Matt, I have children, so I have seen some of these Pixar movies, but believe it or not I have never seen Brave or Wall-E, and only most of Coco, even though I think they can easily be seen for free at times on different platforms. My 6-year-old doesn’t often sit through movies, so that is a big reason why. But the key entry is smack dab in the middle; a stark reminder of my constant brown uniform for nearly 30 years! UPS is often a puzzle entry, but UPS DRIVER would be a debut NYT entry. A solid 4.6 stars this week. 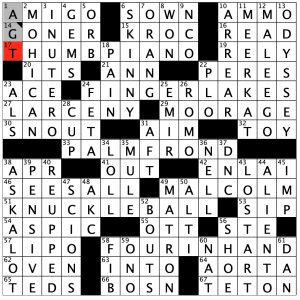 The key with solving Downs Only is trying to figure out what the theme is. This one was straightforward enough to enable a fairly smooth confidence-bolstering solve in just under 6 minutes. The revealer at 58A explains it all. Even though I solved without them, here are the theme entries:

So once you can see parts of the hand in an across entry or two, it was fairly obvious what was going on, but the glue entry at 58A definitely ties this one up in a neat bow. This one was fun. 4.4 stars today.

Have a great Tuesday, everyone!