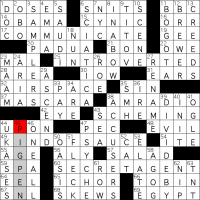 hello and welcome to episode #568 of matt gaffney’s weekly crossword contest, “First and Third, Two Out”. this is week 3 of gentle april, and i’m trying to do the whole month without using the instructions. what have we got for theme answers? six long across entries have a clue consisting only of *:

what do these answers have in common? the connection came to me after a moment’s thought, when i wrote down SPY next to SECRET AGENT and then immediately SHY jumped out at me for INTROVERTED. indeed, they all clue a 3-letter word of the form S_Y:

but what’s the meta answer? that took me a while longer. the six middle letters spell out AHKLOP, which isn’t anything, although i noticed that it’s an anagram of LO, PAHK! (incidentally, it’s an elegant touch that they’re in alphabetical order from top to bottom.) i thought about it some more, and i realized that these are almost all of the S_Y words in english. the only one missing is STY. could that be relevant?

why yes, yes it could, because 45-down is {Muddy place} PIGPEN. so this must be one of those “find the extra theme answer that’s not asterisked” metas. indeed, the instructions are: Six of this puzzle’s theme entries are starred. What is the secret seventh theme entry? (You can submit either the clue number or the entry itself.) so PIGPEN is indeed the answer. (or 45-down, if you prefer.)

very nice meta—and, dare i say, just about the perfect difficulty for a week 2. i found it highly satisfying as a no-instructions solve. the title is a pretty good fit, too; it’s slightly arbitrary as baseball phrases go, but it works here.

bits i noticed from the fill:

that’s all i’ve got this week. have a great tuesday!