Cute wordplay going on today as common words are broken in two with the latter half being some kind of bothersome pest, either insect or arachnid. 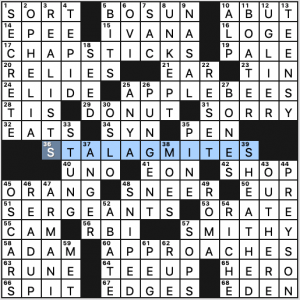 I can certainly pick some nits (haha), but once I realized the pest angle, I liked the theme much better.

I did have a heckuva time getting the R and O in APP ROACHES. Those crossings are clued [Bitter medicinal herb] for RUE and [Bribes] for SOPS. Huh? I don’t recall ever seeing those uncommon definitions for those common words before. Do us a favor and spread those off-the-wall clues out.

The 11-letter central entry causes large open corners in the grid. Mostly, they’re handled very well. I especially like the OPHELIA / REALISTS stack in the NW. “OUT HERE” feels a little on the iffy side, and I’m definitely anti-ORANG, but everything else in the corners is solid. 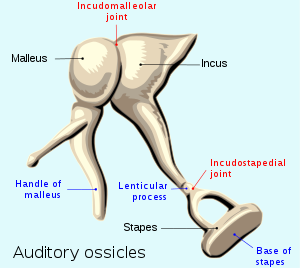 “Base of Stapes” would make a good name for a band. 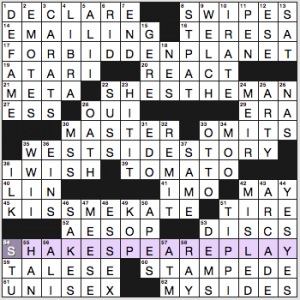 The puzzle’s easy enough to be a Monday or Tuesday, is running on Wednesday 4/24, and relates to Shakespeare, whose birthday is 4/26 and deathiversary is 4/23. Close enough for government work, or better to just run the puzzle in some other month on a Tuesday?

Revealer: 54a. [What the film answering each starred clue was inspired by], SHAKESPEARE PLAY. Here are the movies:

Coincidentally, the 10/13/10 movies were the theme set in a 2017 Aimee Lucido puzzle for Crosswords With Friends. 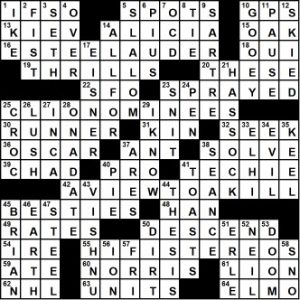 So, Matthew, focused on symbols of strongness, places four such items so as to span the junctures of words in a name, a movie title, and a couple of interesting phrases. To make it easy to follow, I’ve rearranged things a bit:

So, we have four long horizontal themers that are symmetrical. Plus four shorter answers–two Across, two Down–each functioning as a mini-revealer, asymmetrically placed roughly one per corner.  Interesting spread.

With every section of the grid involving theme, it’s not surprising to find not much else of note. ILSA’s are ON A DATE, ALL FOR, and I KNOW. Couple of other interesting entries are  HASSOCK and BESTIES. 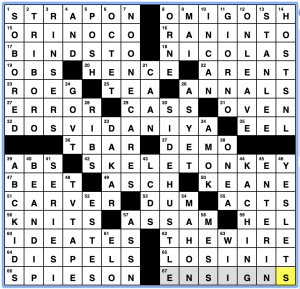 It’s a themeless week at the AVCX, and the second themeless I’ve solved from KAC this week after Monday’s New Yorker puzzle.  I have my fingers crossed the trend continues later this week –  KAC’s grids are always solid and the fill is a good blend of knowledge sources.  This AVCX was a 4.5/5, but felt easier than Monday’s puzzle to me.  Let’s dig in:

Great stuff all around.

If you’re a 90s kid like me, you likely recognize Enya’s “ORINOCO Flow” from the Pure Moods infomercial above. 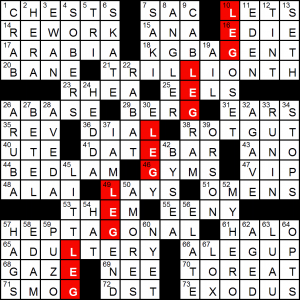 “Trigram progressing from one side of the grid to the other” is an infrequent trope, and today it’s running vertically not horizontally, which is an additional small wrinkle. The puzzle is revealed at ALEGUP – with an awkward-sounding article prefacing it. The five legs are found in LITT(LEG), clued very meta as [*What makes Guy a guy?]; [*Post-apocalyptic Will Smith film], IAM(LEG)END – not seen it in part because I avoid Will Smith like the plague, however I have seen Omega Man with Charlton Heston, which is the same film I believe; a central E(LEG)Y clued as [*Gray wrote one in a country churchyard] – apparently the poet is Thomas Gray – it naffly evoked Chris De Burgh for me, alas; a CAB(LEG)RAM is a quaint [*Telegraphed message]; lastly, [*346-piece Big Ben, e.g.] is LEGOSET.