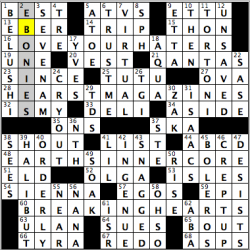 Good day, everyone! I hope all of you are doing well! Today’s grid is more fun with anagrams, as the first three entries all feature a word that’s an anagram of “hearts.” The fourth and final theme entry, BREAKING HEARTS, not only is the reveal but might also very well act as an earworm for those Elton John fans who now have a few of his songs playing in your head after answering its clue (60A: [Elton John album with the hit single “Sad Songs”…and an apt title for today’s puzzle]).

From the extremely trivial department, solving for LIL’ made me wonder if the other famous rappers with that moniker use the apostrophe at the end of it like she did professionally (41D: [Like rapper Kim]). Alas, both Lil Jon and Lil Wayne do not! Was held up for a little bit when I put in “cart” instead of LIST, as putting in the “t” first in that entry caused me to commit that error initially (41A: [Shopper’s aid, often]). None of the long non-themed entries, while pleasing to look at, did not really stand out today. I did learn, however, that BELUSHI was also an author to go along with his well-known exploits as an actor (1D: [“Real Men Don’t Apologize” author Jim]). Speaking of learning things, I had no idea until right now that QANTAS is the third-oldest airline currently in operation in the world, as it was founded in 1920 (21A: [Airline whose logo features a kangaroo]). Only KLM and Avianca were founded earlier than Qantas and, in terms of continuous service, only Avianca outpaces Qantas. (KLM suspended its service during World War II.). Good to know!

“Sports will make you smarter” moment of the day: THON (15A: [Dance-a-____ (fundraiser in a ballroom)]) – One of the saddest things in life, let alone in sports, is to see someone with great potential and promise have their careers cut short and/or their talent(s) robbed from them in their prime, and that’s something that happened to former  Major League Baseball infielder Dickie THON, who played in the big leagues from 1979-1993. In 1983, Thon was selected to represent the National League in the All-Star Game and finished seventh in the Most Valuable Player Award voting while with the Houston Astros. At the beginning of the following season, Thon was hit by a pitch in the face that fractured the orbital bone around his left eye. He missed the rest of the 1984 season and, although he came back in 1985, he suffered depth perception problems for the rest of his career and never reached his full potential in the Majors. Kudos to him for being able to play almost another decade after his horrifying injury. Not sure this passes the breakfast test, but here’s a picture of the immediate aftermath of the April 8, 1984 incident. (I’m almost certain that former All-Star outfielder Jose Cruz Sr. is the other Houston Astros player to the right, coming over to Thon’s aid.) 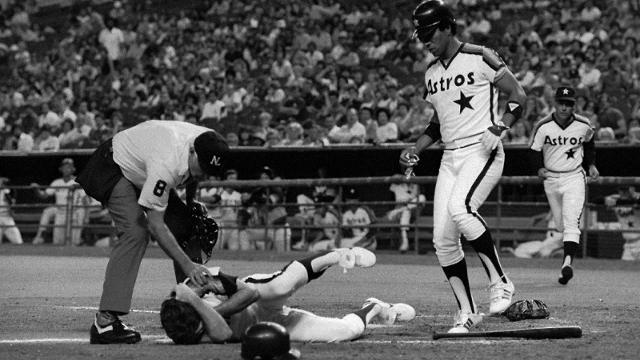 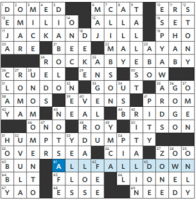 I really enjoyed solving this puzzle, and was especially happy to see women like Maya ANGELOU and Nia VARDALOS in such prominent grid positions, along with Yoko ONO and Tori AMOS.

So many thoughts on the theme / construction / cluing!
– What a fun, cohesive theme. My kingdom for a theme set that is this tight and symmetrical in theme lengths. ::chef’s air kiss::
– With ALL FALL DOWN as a revealer and “Look Out Below” as a title, it feels like the theme entries should have be placed going down, not across. Missed opportunity, for sure.
– I’m torn on the cluing of the revealer. Since the title of that 1962 movie is likely based on the nursery rhyme itself, it seems superfluous and random to cite that otherwise unrelated movie when simply citing the well-known nursery rhyme phrase itself would be just as impactful. That said, I really appreciated that revealer.
– I was torn on the cluing of the theme entries, but I’ve come around to them. I like how each clue cites what was broken in the respective falls.

Random ?!? moments:
– There was a missed opportunity to pair 6A’s [Exam for future docs] MCAT with something like [Exam rooms for future docs?] for ERS.
– Isn’t the phrase un momento, not UNO MOMENTO? This felt awkward to plunk in.
– Isn’t the term Malay or Malaysian, not MALAYAN? This felt less common to me.
– I had to look up DIABOLO – I never knew this yo-yo thing was called that. Fun!
– Having [ADHD drug] RITALIN and [It may make you a better person] for PILL right next to each other felt … judgmental, or awkward at the very least.
– 63D: Not every DOE wants a buck. Most probably do, but not all of them do. Check out this wiki article on same-sex animal behaviors to see how widely documented these behaviors are. For whatever reason, clues like these make me feel :/ every time. 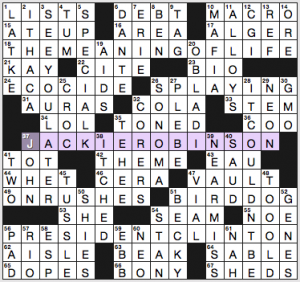 Simple yet surprisingly fresh theme, focusing on the number 42:

Two thumbs up for the theme. 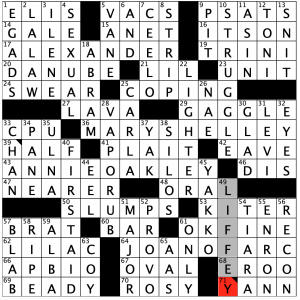 Ah, to be 18 again … I am nearly three times that age! But that is the theme, and not the first time that Matt has marked a milestone of his Jonesin’ with a clever theme. The puzzle is now 18 years old, and so far is standing the test of time, even through the slow death of newspapers all over. And the age of 18 plays prominently in the clues for the longer answers:

So we have several famous people who accomplished quite a bit by age 18. I know I still haven’t accomplished these kinds of tasks, and as I mentioned, I am WELL past 18. I suppose that is why they are famous! For some reason, my timer never started, so I have no idea how long it took me to solve this; perhaps 4 minutes or so? Let’s go with that! Here’s to another 18 years of puzzles, Matt! 4.4 stars for this one.

I could go on, but I will stop here. Another Jonesin’ next week. 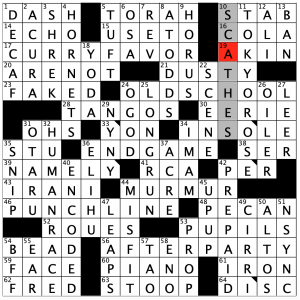 Not too bad of a Downs Only solve on this puzzle, but when you cannot get answers of Down clues that are 8 or 9 letters long, you are in for trouble, and that is what happened to me. I did figure out the theme this time, and the revealer is the last theme entry at 56A. Here are those theme entries, and some of these clues I am seeing for the first time here!

So we have the ends of each of the first four themers  that can follow the word “party,” as in party favor, party school, party game, and party line, the latter featuring prominently in the news these days. Nicely done. I am not as smooth as Andy Kravis yet, but still a nice puzzle! 4.2 stars from me.

Some of my favorite Downs:

Stakes are high in today’s Universal! Evan Kalish brings us a poker-themed puzzle.

THEME: Phrases that start with words used for betting in poker.

Nifty, straightforward theme, though I wish CALL had come after RAISE. It does seem like there are an awful lot of possibilities of phrases that begin with these words. I’m surprised I can’t recall seeing this theme before since it makes such a nice, cohesive set.

Did anyone need any of the crossings for 59A [Archie Bunker’s sitcom]? I feel like we should be challenged just a tiny bit more when it comes to theme answers (as opposed to regular fill). That was a dead giveaway.

Nothing wrong with the fill here! That’s to be expected in a Kalish puzzle. Nice job, Evan!