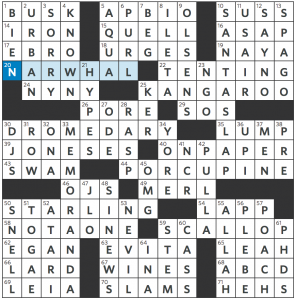 I sure fell into a rabbit hole on this one, while looking for a five-letter animal. We have six animals in the grid, all clued as “Featured creature,” with an enumeration of letters:

My first idea was to think about “feature” in the sense of “movie” and so I was looking for “creatures” that had been in “features” and whose names were enumerated thus:

NARWHAL == NALA (from The Lion King)
KANGAROO == RANGO (from Rango [he’s a lizard of some kind])
DROMEDARY == DORY (from Finding Nemo and its sequel, Finding Dory)

But this fizzled out after I couldn’t apply the extraction method (i.e. find letters from the cartoon animal’s name anagrammed within the entry) to the rest of the entries. A solving pal suggested thinking about “feature” in the more literal/specific sense, like a body part, and, yes! I looked at the first across entry — [1a: Play on the sidewalk, maybe]: BUSK — and realized that if you change one letter, you get TUSK, which is a “feature” of the NARWHAL. Thus was on my way to find other entries that become “creature features” if you change one letter, like so:

If you take the changed letters in order of the corresponding grid entries, you get BALEEN, which is a feature of the creature known as a WHALE, which is a five-letter animal, and our answer. I thought this was fun! Ewe?