MIXED FRUIT is our theme, clued [Sweet snack, and a description of the first words of the starred answers]. Each theme entry begins with a word that’s an anagram of a fruit. 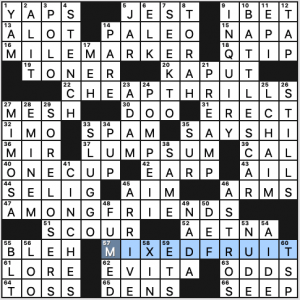 Nothing tricky about this theme, but it’s nice and clean and satisfying. I wonder if Alex considered something like WIKI LEAKS.

I struggled mostly in the upper half of the grid starting at 1a [Sounds from pounds] atop 13a [Heaps]. I went with ARFS and TONS before fighting with the crossings to land at YAPS and A LOT. In the middle, JOKE seemed the likely answer to 5a [Laugh inducer], but it turned out to be JEST. And on the right, I went with a sarcastic-sounding YEAH to answer 9a [“Uh-huh…sure, buddy”]. It wasn’t until I got the lower half of the crossings that I could see it was going for I BET. Thankfully, after those initial struggles, I either got onto the right wavelength or else the bottom half of the grid was clued more straightforwardly.

I loved seeing SLUGGO in the grid as well as POMPEII, KAPUT, the BLEH/MEH combo, and especially BATTLE SCAR and SORE LOSERS.  Didn’t care much for XIN [Choose, as a survey box], but that’s a small nit in an otherwise solid grid. 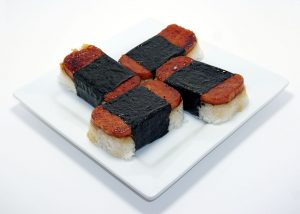 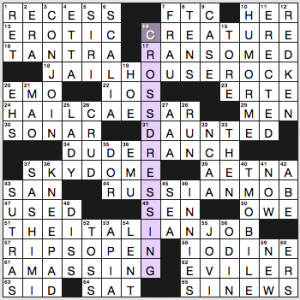 I found this puzzle to be a good bit easier than yesterday’s NYT. Anyone else feel that Tuesday and Wednesday were flip-flopped?

Theme is CROSS DRESSING, [“Mrs. Doubtfire” plot device – or what the letters in this clue’s answer do five times?], and this 14d answer crosses five long answers right through words that are also types of salad dressing. JAILHOUSE ROCK has house dressing (I was astonished last week to be told that a restaurant had only the house vinaigrette and no other options, though I know they used to always have balsamic. Does this mean they’re on their last legs?), HAIL CAESAR has Caesar, DUDE RANCH has ranch, RUSSIAN MOB‘s got Russian (eww), and THE ITALIAN JOB has Italian.

I like the theme execution, and I don’t think CROSS-DRESSING is questionable as clued.

Don’t love ABE clued as a $5 bill, because who actually uses that outside of crossword clues? And ERTE is meh fill, but in a nice open corner. 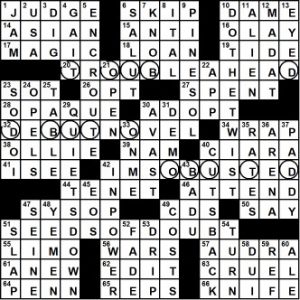 The letters of the word DOUBT appear scattered through each of three horizontal ILSA’s, and a fourth horizontal entry, which is metaphorical as a whole, serves as a reveal. Take a look:

So, doubt, which seems to me to be the non-metaphorical part of the seeds metaphor, is mixed? Are the letters in doubt its seeds? Just asking.

None of the horizontal allies are more than six letters long. In the Downs, though, we find:

Fun stuff, though a tad hazy in the final analysis! 3.0 stars. 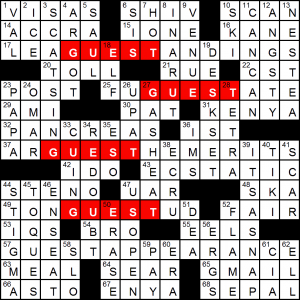 I think of GUESTAPPEARANCEs more as big names appearing on regular tv shows than guests on talk shows, but that may just be me? In any case, the exact letters GUEST repeat 4 times in other long across answers. It’s quite a big chunk to hide four times: LEAGUESTANDINGS and TONGUESTUD are good, and the FUGUESTATE is a really interesting phenomemon, but ARGUESTHEMERITS was a tad awkward without its OF. I think the puzzle wouldn’t have lost much to have just the 3 GUESTs. 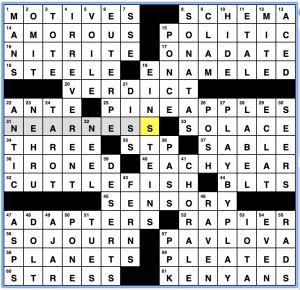 We’ve got a world debut in the AVCX — congrats, Juliana Tringali Golden!  Maybe it was the 4/5 difficulty, maybe it’s wrapping my brain around a new constructor’s cluing style, maybe it’s tackling this at the end of a busy workday, but this one took me longer than usual.  Let’s look under the hood at the fill:

I’m still on an Icelandic band kick. This is Vök.