Fireball is a contest this week. We’ll have a review posted once the contest is closed.

The word “for”, normally in the middle of the theme phrases, has been removed. 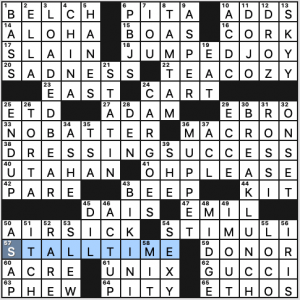 Despite the little nits I picked, the chuckles won me over, and I enjoyed the theme.

I further enjoyed the longer fill: TEA COZY, OH PLEASE, AIRSICK, MUPPET, and NO BATTER [Little League dugout taunt]. I wanted HEY BATTER BATTER for that last one or BELLY ITCHER, but neither would fit. I actually did try AY BATTER, but it took the crossings for me to get the correct phrase which I finally recognized once I saw it. Still, I think there should be some indication that in practice the phrase is chanted repeatedly (though not at practice).

Not a fan of crossing crosswordese: Latin ECCE and Spanish river EBRO. And I’d never heard of a TAMTAM (8d, [Flat gong]), but I’m happy to learn it. I considered STATOR for a while for 21d [Lipitor, for one], but thankfully I correctly put in STATIN. For the record, a stator is “the stationary portion of an electric generator or motor, especially of an induction motor”. Got that?

All in all, a fun grid from start to finish. Four stars. 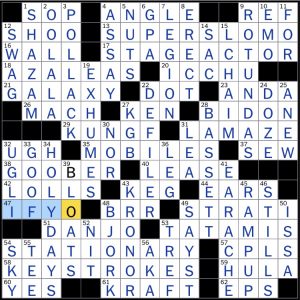 My Thursday average got a little longer thanks to Jeff Chen’s puzzle today.  It starts out with four clues whose fill in the grid doesn’t make much sense:

A revealer in the downs helps link the two:

I caught RAMP UP fairly early on, but then attempted to use additional white squares as the bridge.  That’s not the case here – each set of three black squares RAMP[ing] UP the grid can be used as “UP” and connect two halves of the correct answers to the clues at 26A, 29A, 47A, and 51A: MACH[U P]ICCHU, KUNG F[U P]ANDA, IF YO[U P]LEASE, and D’ANJO[U P]EARS.  This one took me far longer than it should have, given how straightforward this seems.

Rejoice people of Suriname! You made it into a crossword theme!

Dagnabbit! I’ve been a similar theme kicking around in my constructor notes for some time now, with one of the entries being KUWAIT WAIT DON’T TELL ME.  Matt beat me to it!

SURINAME is new to me. It seems like an outlier too since the NAME part is pronounced differently in the country.

No real complaints in the fill. BOY GENIUS was especially nice. I don’t know much about Chinese flavor additives, but STAR ANISE is definitely not in my spice rack. 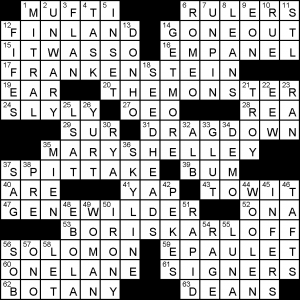 It’s a sort of a commemorative puzzle theme today. Author MARYSHELLEY is centre, and her work FRANKENSTEIN (;or, The Modern Prometheus) is the first entry, followed by THEMONSTER. The bottom half features actors who have played the roles of a Dr. FRANKENSTEIN and THEMONSTER in two different (out of many, many) film adaptations: GENEWILDER and BORISKARLOFF respectively. 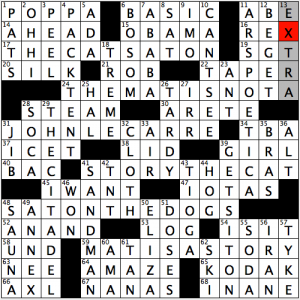 A quote puzzle from BEQ today. The quote, from [“A Legacy of Spies” author] JOHN LE CARRÉ, is: “THE CAT SAT ON / THE MAT” IS NOT A / STORY. “THE CAT / SAT ON THE DOG’S / MAT” IS A STORY. A parable about conflict in storytelling.

I found this incredibly tough! The quote itself was challenging to solve — lots of short words in the quote, so if you’re missing a couple of letters in key spots, it’s really hard to see what the quote will be.

Plus, there were a lot of tough spots in the fill, I thought:

And so on. Maybe I’m undercaffeinated today, but I found nearly every section of the puzzle sticky today. The challenge didn’t diminish my enjoyment, though — as quote puzzles go, I thought this one was absolutely fine.

By far my favorite clue was the new one for crossword staple ICE-T [Rapper who had his first-ever coffee and first-ever bagel in 2018]: