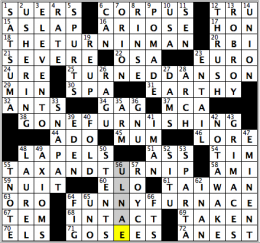 Hello there, everyone! Hope all is well and you all have recovered from whatever feelings you may have had after the Game of Thrones finale! Today’s grid is all about adding the letters “URN” consecutively somewhere inside of common phrases/proper nouns to create some puns with the themed entries.

From the outset, the longer fill was going to be good after solving for SATSUMA (1D: [Type of mandarin orange]). That’s definitely an entry that you might come across in a puzzle later in the week, but good to see in this grid nonetheless! Loved the trivia/historical aspect in the clue for TAIWAN, as I had not come across/heard the word Formosa for a good long while until today (61A: [Formosa, today]). Initially was thinking of some type of bird when reading the clue for ORION before its crossings made that answer of the constellation apparent (7D: [Hunter in the sky]). As you’re reading this, there’s a good chance that I’m currently on a bus going to Toronto, which means I definitely will be NOT AWAKE for most of the 12 hours it will take to head up there (42D: [Still sleeping, say]). Probably should have a ROB ROY or two before boarding to knock myself out and not think about how my body will handle the ride (13D: [Sir Walter Scott novel or a scotch cocktail]).

“Sports will make you smarter” moment of the day: UNION (14D: [Labor group)]) – Giving American soccer some love, as, in 2010, the Philadelphia Union made its debut in Major League Soccer as a expansion team. Their name and logo, the latter of which includes 13 stars, is an homage to union of the Thirteen Colonies, while their colors are navy blue and gold, the colors of the Continental Army uniform. Though the team has yet to win a major trophy in its decade in existence, they have gone to the U.S. Open Cup Final in 2014, 2015 and 2018. At the moment, the Union sit in first place in the Eastern Conference, so if you’re in the Philly area, check out a game!

Quite the onomatopoeic Tuesday WSJ from Gary Cee today: 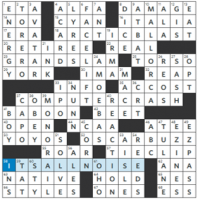 18A: ARCTIC BLAST [Frigid weather from the north]
23A: GRAND SLAM [Hit that produces four runs]
37A: COMPUTER CRASH [Memory loss rationale]
52A: OSCAR BUZZ [Excitement surrounding a prestige position]
58A: ITS ALL NOISE [“That’s just talk, talk, talk,” or a hint to the ends of the starred answers]

All in the language phrases with quite bombastic-sounding endings. An enjoyable and smooth solve!

Random thoughts:
– I liked the juxtaposition of ETA and ALFA and their clues!
– 58A: Is it a dupe to have INS be the answer to [People in power]? It essentially uses the answer as part of the clue.
– 41A: It’s often true that a BOY is a [Future man], but not always. But often, boys understand their gender identity much better as they grow up and understand themselves to be the women they genuinely are. I know the clue doesn’t mean to be dismissive, but it’s a good reminder that things like gender aren’t quite binary.
– Not many women in the grid, but we at least got to see representation from ANA Cabrera and IRMA la Douce. Better than nothing? 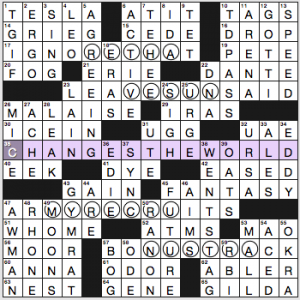 I caught on to the theme surprisingly quickly, and filled in the last two themers with no crossings, just the number of circled letters narrowing down the letter possibilities for 7- and 6-letter planets. Not that I flew through the puzzle particularly fast (by tournament standards), mind you. The revealer is 35a. [Has a huge impact … or a hint to this puzzle’s circled letters], CHANGES THE WORLD, and planet names are scrambled in the midst of the four themers. IGNORE THAT has Earth, LEAVES UNSAID has Venus, ARMY RECRUITS is a nice find for Mercury, and Saturn’s in a fresh BONUS TRACK. 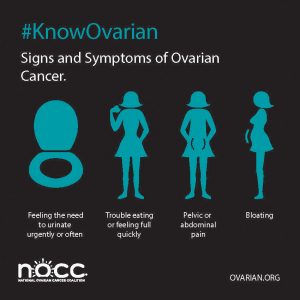 I bet a lot of solvers from roughly my generation saw the Across answer preceding 65a. [Comic Radner of early “Saturday Night Live”], GILDA, and went “Awww.” GENE isn’t just a [Chromosome component], it’s also Gene Wilder, who lost the love of his life, Gilda Radner, to ovarian cancer. It’s important to know the incredibly vague and nonspecific symptoms of ovarian cancer, since it’s nigh impossible to screen for it. If you or a loved one has these symptoms, it’s a good idea to check with a physician, even if you think you’re making too much of nothing.

Not keen on cluing a SIGH with 24d. [Ah, me]. Who says that? And who is out there literally cheering 1d TGIF? Anyone? And I loathe TEHEE, but I’m good with tee-hee.

Fill is mostly fine. Theme mostly works for me (IGNORE THAT feels a little weird). 3.4 stars from me. 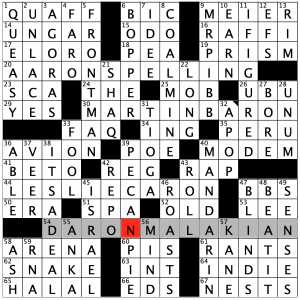 This theme does remind me of a multiple choice test! This is a theme I didn’t see immediately, but the unique spelling of the name at 54A makes this theme possible:

The obscure-pop-culture-reference of the week is certainly 54A for me, although 30A is vague at best, and that was even in a movie I have seen! Who knew there were variations of this spelling that use A, B, C and D. Nice puzzle, Matt! A solid 4.3 stars for this one. 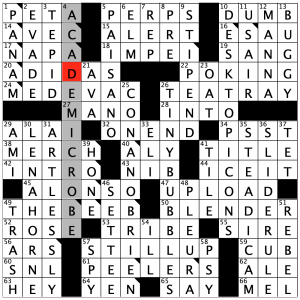 John-Clark Levin is definitely a name I don’t know, but the name is in the database on this site! I wonder how many crosswords he has made? I had quite a time doing this one Downs Only, and they are always harder when the theme answers are going down. Sometimes it is easier, especially if you understand the theme, but if you don’t, it can get ugly. My time is not horrible for a Downs Only, but look at all the errors in the grid! Also, as you can see, my Downs Only copy didn’t have the circles. I will mark the circles letters in red in the theme entry list. Each set of circled letters contains a prefix meaning something really small:

You know that song is going to end up in this blog post, don’t you? Yes, prefixes meaning “tiny” are in circles, which do look like “bubbles,” don’t they? Very nicely done. In a few days I will torture myself watching Andy Kravis solve this puzzle Downs Only in about 2 minutes. 4.4 stars from me for this puzzle that has me yearning for some champagne!

Have a great week everyone! Oh, I almost forgot:

This puzzle came in handy today.

THEME: Types of “hands” are placed together and clued wackily.

Really like this one today. Especially as it led up to the revealer which gives it an AHA click. At first, I thought the theme was dealing with opposites, then balked at MINUTE SECOND (since they’re not really opposites). HIGH CARD PAIR definitely added to the confusion. But I like when the revealer comes as a surprise and makes perfect sense.

The clues (and resulting answers) for the themers were great- nice balance of completely absurd, yet somehow sensical. The only nit that I have is that MINUTE as clued (My-Noot) is pronounced differently than MINUTE as in “MINUTE hand.” But who cares? This was a solid puzzle today.