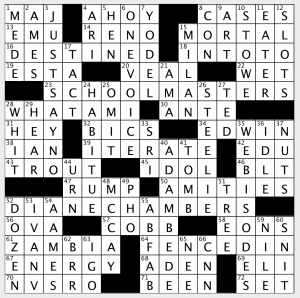 Hi folks, Evad back in the meta recap chair while our peripatetic librarian seeks out new places to hang out and drink beer (sounds like something I should be doing right now!) This week in the Wall Street Journal our offering is from editor Mike Shenk (nice to see Mike has abandoned his nom de plume of Marie Kelly) and he asks us to find a five-letter word. Well, by now, if you have five theme entries (starred this week, so I presume we don’t miss the one in the center) and are looking for a five letter word, it’s dollars-to-donuts that each theme entry will contribute one letter to this set. And we have a revealing clue at the end that seems to confirm this:

So what are the five theme entries? They are: 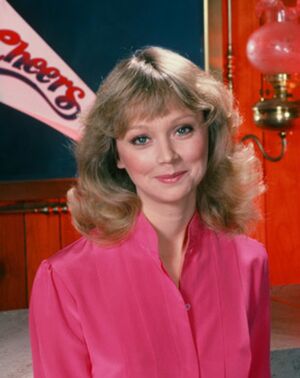 OK, so my first idea was to look for these 5 letters (NVSRO) in each of the five theme entries, but I wasn’t sure if I used all letters in each entry (and what would I switch them to?) or just one apiece. Problem with that idea is that there is no V in any of them. Were we supposed to switch the V in entries that aren’t starred (like IVAN V, for instance?) That seemed a dead-end prospect, especially since the grid was chockablock with the common letters N, S, R and O.

So where else to look for these letters? How about the clues? And, in particular, the clues for each of the starred entries? And when I saw that V in the second them entry, [*Classroom vets], I felt the thrill of the chase. I then made sure the other four letters were in the other clues. But then I wondered what to change them to? Would “Classroom jets” (or “nets” or “sets”, etc.) also work for that entry? No, it finally was the realization that these clues were actually anagrams of their corresponding entries if you switch one letter. This is an amazing discovery, thusly:

As I was building this list from the top, I thought the meta solution would (very appropriately) be SHIFT, but it was SHINE, alluding to the word “light” in the title. I kinda feel bad for Laura not getting a chance to review this masterwork, but hopefully she had some time over the weekend to enjoy it all the same.

That said, I tend to find Mike’s puzzles a bit proper name-heavy and this was no exception. I guess Willie AAMES should be famous enough given those two A’s at the beginning, but I had no idea who he was. Windsor McCAY is another name I didn’t know, and though I recognize ADAM BEDE, the clue referencing a carpenter in an 1859 novel was not helpful to me anyway. As for the other entries, my favorite clue was [Nursery sight] for TREE (you were thinking babies too, right?) and the unusual (and interesting) entries HABITUÉ and WEBISODES.