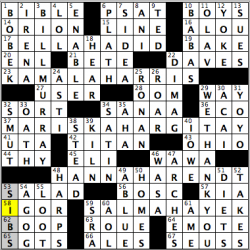 Good day, everybody! Here is hoping all is well with you as we speed into summer. Today’s grid is all about eye-opening women, especially those who make us say AHA when realizing that all of the ladies who make up the theme entries have those three letters, consecutively, spanning their first and last names (35D: [___ moment (the five longest horizontal answers have one!)]).

Today seems like the perfect time to tell you the story about how BILL MURRAY personally wished me good luck before doing an interview (3D: [“Ghostbusters” actor who said “Movie acting suits me because I only need to be good for 90 seconds at a time]). Bill’s son, Luke, is a college basketball assistant coach who was at the University of Rhode Island in 2015, and after URI defeated Fordham on a buzzer-beater in the Bronx, I lined up a one-on-one interview with the head coach, Danny Hurley. About 20 minutes after the game ended, Hurley and Bill Murray were having a conversation and I was standing right next to Hurley, waiting for the convo to end so I can start the interview. Hurley then walks away for a minute to meet one of the parents of the players, leaving Murray and me relatively alone. (Trust me, this actually happened!!) We small-talked, I told him what I did and how I was getting ready to interview Coach Hurley, he made a funny joke about sports reporting and, as Hurley was coming back to our area, Murray told me to “break a leg.”

I would have cried if I was not in the middle of, figuratively, wetting my pants at that moment.

Probably the other highlight of solving the grid was thinking of the Barbara Walters parodies when solving for WAWA (46A: [Gilda Radner persona Baba ___]). Never saw the skits when they originally aired but they are definitely hilarious! Never associated the actual Barbara as having a pronounced Boston accent, but I might not have been listening closely. That, and I probably have not heard Barbara’s voice for more than about 30 seconds since I stopped watching 20/20 years ago. Hope you all got that DIMAG was referring to New York Yankees great Joe DiMaggio (22D: [Joltin’ Joe, in sports headlines]). Not going to highlight The Yankee Clipper in the next graph, as we turn the spotlight on…

“Sports will make you smarter” moment of the day: BOBEK (1D: [Olympic figure skater Nicole, winner of the 1995 U.S. National Championship)]) – I almost fell out of my chair when I saw this clue, as I probably have not seen/heard her name in 20 years! Nicole Bobek was a highly-talented skater who never reached her potential on the Olympic stage, mostly because of injuries and constant coaching changes, but had some wonderful highlights, including winning the 1995 US nationals. (Michelle Kwan finished second.) Later that year, Bobek finished third in the 1995 World Championships in Birmingham, finishing behind Lu Chen of China (bronze medalist in 1994 and 1998 Olympics) and, my personal favorite figure skater, Surya Bonaly of France — yes, the figure skater who routinely did backflips during her routines! 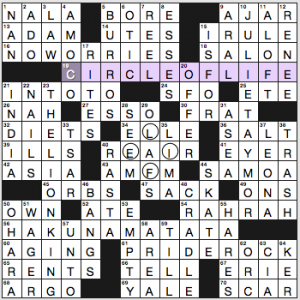 I’m perplexed. How do you schedule a Lion King puzzle for 5 weeks before the much-ballyhooed “live-action” remake comes out but only refer to the 1994 movie and the 1997 stage musical? I believe the original songs are all back in the new movie, as are NALA (now voiced by the Queen Bey herself) and SCAR (still voiced by James Earl Jones). JULIE TAYMOR, director of the Broadway adaptation, would stick out, but the puzzle wouldn’t feel decades old.

The other themers are NO WORRIES, CIRCLE OF LIFE, a dumb little diamond of circled letters spelling out LIFE, HAKUNA MATATA, PRIDE ROCK, and THE LION KING.

Unfortunate overlap: ARAL clued as a sea directly above ASEA.

In addition to the plentiful theme answers, the grid’s got something like 19 proper nouns, which means the puzzle feels like an unpleasant “trivia quiz” to solvers who aren’t good with names. 37d. [British singer Lewis with the 2008 #1 album “Spirit”] clues LEONA, for example, and she’s had exactly one top 10 hit in the U.S. Constructors take note, though! She’s one of the recording artists to be featured on the songwriting reality competition show Songland that’s on TV this summer. At last, something to clue her by that isn’t over a decade in the past.

My picks for the worst entries are mostly not names, though: ESSO KER- -OTIC REAIR EYER, plural OLAFS and ESSES. With 72 theme squares (if you count the K and I twice where they appear in crossing themers) and the circled letters constraining the six entries that cross them, you’ve got a recipe for compromises in the fill. 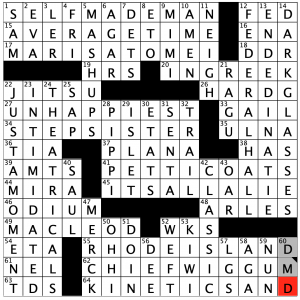 A stellar 68-word themeless is the Jonesin’ puzzle this week. A few of the entries seem quite timely, which is always the advantage that an indie puzzle with a really quick turnaround can provide. Lots of 3-letter entries, true, but there are a dozen 11-letter ones to make up for it! And this one has a high fun factor, which I hope you found to be the case as well. I have no time listed for this puzzle; there seems to be a timer issue with the file I use. Anybody out there have any ideas as to why one of these programs that export .puz files would disable the timer? 4.6 stars for another puzzle that seems like Matt produces almost effortlessly!

Keep those Jonesin’s coming! Another review next week. 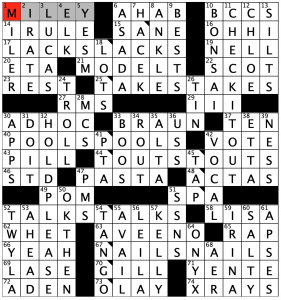 There is a lot of double-talk going on here! I solved this Downs Only, so I didn’t get the advantage of the clues for the six (count ‘m, six!) theme answers. Clever idea here, so I will examine the Across theme clues for the first time here!

So we have 10 letter sequences that are the same 5 letters repeated, but broken up into and clued as a phrase with a 4 6 enumeration. Is that an accurate description? Likely it can be said much better, but I am tired, and as I type this the NBA Finals are on! Yes, I am a little distracted! 4.4 stars.

Some Downs Only highlights:

If any of Jacob Stulberg’s relatives need a birthday shopping list, here are a few of his Favorite Things: 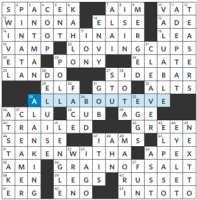 So, the constructors list of “My Favorite Things” didn’t unfortunately line up with a list of my favorites. That’s okay – each puzzle will hit folks differently. There were still certainly moments that brought me joy, like seeing Sissy SPACEK, WINONA Ryder, and Frida KAHLO all right up at the NW corner or like VAMP not being used to clue a woman.

Other random thoughts:
– A POLL is not always an accurate [Election predictor], as we saw in 2016…
– There were a lot of ???!? names in here for me, like ALAN KING, STU Ungar, Phillip AHN, and Madeleine LENGLE (though inclusion of women certainly grants this one more of a pass).
– There’s an AT dupe between ADEPT AT and AT STAKE. I never know how to feel about dupes when they’re in partials? What do y’all think – does it impact your solving experience?

Full disclosure: I missed the deadline for this write-up by a few days and solved Evan’s version prior to editing since the puzzle was no longer available.

THEME: Turn “it” around. The letters “it” are switched in common phrases and clued wackily. 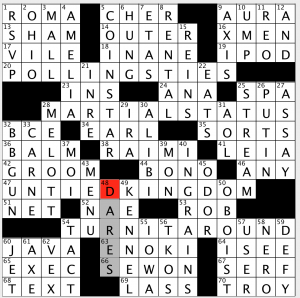 Solid from start to finish for me, though BCE/MELOTT had me running the alphabet for the E.