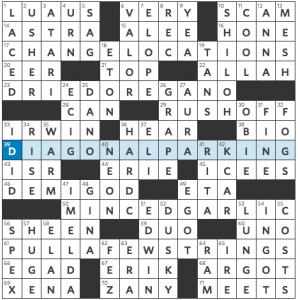 Good solvers all, cast thy nighted colour off, and join me in seeking a Shakespeare play! It is the thing that we are forsooth to find. Hark! Five themers, alike in dignity:

If you look not with the eyes, but with the mind, you’ll see that hidden in each themer is the name of a character from the indicated play: 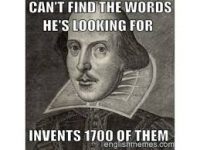 … their first letters spell out ARIEL, fairy servant of Prospero in The Tempest, which is the play that is the thing, which is the answer. My one quibble with this well-wrought meta was that while four of the five characters are reasonably major enough that many people may have heard of them and could suss them out of their encrypted places in the themers, LAFEW is not a particularly well-known character. One would be hard-pressed, methinks, to find another character whose name begins with L, and who could be hidden in a common phrase. Maybe if there weren’t already two characters from King Lear, Matt could’ve used [1984 Depeche Mode hit]: PEOPLE ARE PEOPLE. The fault, dear solvers, is not in our stars, but in ourselves, that we are underlings.