This week’s AVCX puzzle is a contest due Sunday at midnight – we’ll have a review up after the deadline closes.

I’m very happy to see Ms. Ellerin’s byline, not only because she makes great grids, but also because I don’t recall seeing a woman’s byline at the WSJ in a very long time. I hope it doesn’t take as long for the next occurrence.

I’m digging this theme, too. We’re presented with seven(!) two-word phrases which have two pairs of Os each. I guess it would be more accurate to title the puzzle OO 14, but I’m not going to quibble. 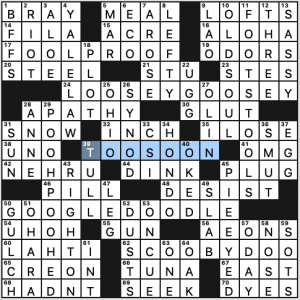 The last one may be a little bit of a cheat since it’s just one word repeated, but I think that’s a quibble. The phrase is valid, and anyway…wow! Finding seven solid-to-fun phrases that have this feature and getting them all to fit in the grid is pretty darn amazing!

And to do that with fun fill like OLD SOUL, “RIGHT ON!”, YALE LAW, and PIE-EYED is more amazing still.

With that mountain of good stuff, you’d be safe in assuming there were some rough compromises. And there are some, but not nearly as much as you might think. The LAHTI / CREON stack in the SW might’ve caused some trouble. OKED always looks weird in a grid. Five-letter AEONS seemed unlikely when a three-letter EON would have fit the clue [Many, many moons] just as well. And I certainly didn’t know [Relief pitcher Darren] O’DAY.

But all that’s pretty minor. Most of my trouble had to do with cluing and pretty much just in the SE since I’d never heard the word “tight” used to mean “drunk” (59d, SOTS). And I think I must be getting PIE-EYED confused with “doe-eyed”, because I didn’t know that it, too, meant “drunk.” But most of those are my own failings.

On the whole, I loved this theme and grid for its lively, fun phrases and strong fill. 4.25 stars. 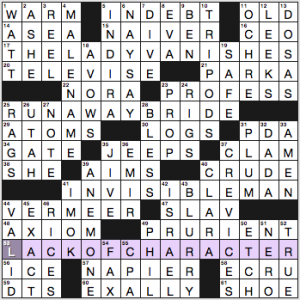 Fun theme. 53a. [Amorality … as suggested by 17-, 25- and 41-Across?] clues LACK OF CHARACTER, and those other themers are movie titles suggesting a character who is absent:

You might quibble that the combo of two 1930s movies and one from 1999 has a “one of these things is not like the other” quality, but there aren’t a ton of vanishing/invisible/ runaway movie titles. I suppose Gone Girl would also fit, if there were another 8-letter title to pair it with.

Fave fill: VERMEER, PRURIENT, NAYSAY. Not so keen on EX-ALLY (who really uses that?). 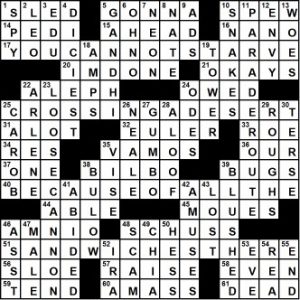 A quip theme, huh? Don’t get me started. I love them all–except for one that my friend Alan Olschwang did 15 years ago in the Tribune Media daily commuter puzzle (it was an unfunny Shakespeare quote).

Paul Coulter has done a nice quip theme here with an old one-liner that’s also a child’s riddle (if you start it out with a question):

There is other good stuff in this puzzle, though not much: 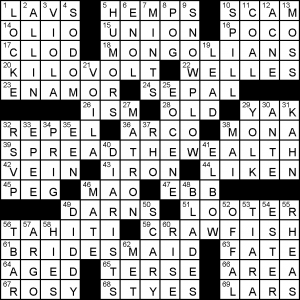 It’s a familiar enough theme concept. The central revealer is SPREADTHEWEALTH, and synonyms for money are spelt out in the circles: MOOLA, LOOT, CASH and BREAD. Not a fan of all the answers being one-word rather than phrases. The use of LOOT also seems to have different connotations to the others. LOOT is also repeated in the entry LOOTER elsewhere in the puzzle.