This week’s Fireball puzzle is a contest. We will publish a review after the contest deadline.

This appears to be another debut. Congratulations, Christopher!

Personal Computer problems I can handle, but the title had me fearing we were delving into the world of Political Correctness. Thankfully, it’s neither of those. It’s a simple letter swap where Cs are changed to Ps at the start of each theme answer. 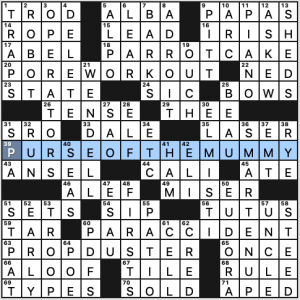 These seemed to work well enough, but I can’t help thinking it’s a fairly straightforward theme for a Thursday. I could see this running on a Tuesday or even a Monday. It’s nice when Thursday puzzles bring us an unusual challenge…and not just in the cluing. Maybe if we had a theme where Ps and Cs were switched… (think PAT’S CAW or PAR CARTS or PITY CLAN).

Still, that’s a scheduling issue, nothing really to do with this grid which, as I said, works well enough. I didn’t get many yuks out of it, but maybe some of you did. PORE WORKOUT feels like the weakest of the bunch because…how would that even work? PROP DUSTER feels the strongest because I can imagine it being a real thing. The rest fall somewhere in between. 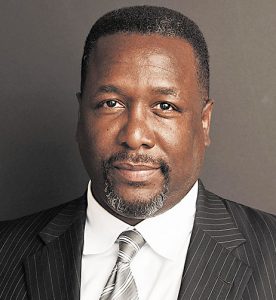 The fill isn’t dazzling, but it is strong. The longest entries are OPERATORS (with the cute clue [They always seem to be standing by]) and SMARTEN UP (it’s odd to think that “smarten” is actually a word). More interestingly, we have WENDELL [Pierce of “The Wire”] whom I don’t know since I’ve never watched that show. Nor did I know EL MISTI [Volcano of southern Peru], but it was inferable with enough crossings. I liked seeing EUDORA [Wordsmith Welty] and the word ADROIT. 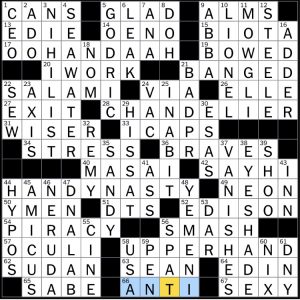 I managed to set a new PR for Thursdays AND smash my usual Thursday time by over 5 and a half minutes on today’s puzzle – must be an extra birthday gift courtesy the NYT and constructors Michael Blake and Jeff Chen.  Here’s what was going on with this Thursday’s grid:

Each of the starred clues’ answer literally has an UPPER HAND — IWORK needs the HAND from OOH AND AAH (“React to pyrotechnics, say”) to become HANDIWORK, which solves the clue.  Similarly, ICAPS takes HAND from CHANDELIER (“Lights up?”) to become HANDICAPS, YMEN uses HAND from HAN DYNASTY to become HANDYMEN, and EDIN closes out the set by taking HAND from UPPER HAND to become HANDED IN.  I thought this was a clever and clean theme – this felt like the puzzle I’d see as puzzle 1 or a warm up at an indie tournament to get in the right mindset for things.

And the rest of the fill is pretty great!  I’m not in love with OENO and BIOTA, but if that and SABE in the lower part of the grid is all I can spot to nitpick in the across fill on this, this puzzle is doing pretty good.  Some nice longer downs in the grid, too – NIHILIST, SEAWATER, VANISHES, and EYESHADE.  I enjoyed briefly thinking through the various layers of a muffuletta – only SALAMI fit the grid, but there’s something about the combo of olive salad, meats, cheese, and the bread that makes those special.

A great effort from Michael Blake and Jeff Chen.

THEME: The word “CUT” has been broken up, and each letter is atop a common phrase, turning it into a wacky one.

Solid theme! My favorite of the bunch was COLD TIMER, though the second half of the base phrase somewhat changes meaning in the clue.

Surprised that the clue for 50D [Competed in a regatta] yielded ROWED. Especially when SAIL was nearby at 56D. I’m sure people ROW in regattas, but I associate it more closely with SAILing.

I feel like I made every typo possible in this grid, but I think that’s largely because the online solving app and I aren’t on good terms with one another.

All around fun puzzle. 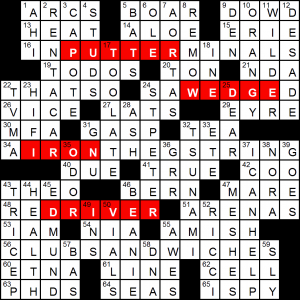 This didn’t quite come together for me. The revealer is CLUBSANDWICH(ES), pluralised for convenience, which as a piece of word play is quite clever. Golf CLUBs are SANDWICHed into four phrases – putter, wedge, iron , driver – but not wood, which is a rather conspicuous omission. When you have the typical members of a set bar one, it always feels wobbly. The second half of the entries were great: AIRONTHEGSTRING lends gravitas (and juvenile sniggering), and REDRIVER an earworm. But the first two were more ungainly: INPUTTERMINALS is dry and another conveniently pluralised answer. SAWEDGED is similarly technical. It’s a difficult theme to pull off, as the hidden answers are so long, so there should be some tolerance here at least.

[Winter expense], HEAT – foreign concept here. Is this gas or what? Here, we rely solely on heaters (apparently Americans call heaters space heaters which sounds incredibly science-fiction) if anything so it is just added to the general electric bill.

The challenging grid is mostly well controlled, but we do have [Do more lawn work], REMOW (not RESOD, which I tried first) and the dubious [Suffix with elephant], INE.