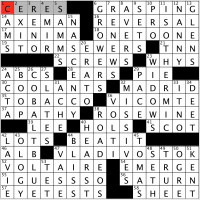 I knew something was up right from the start: [1a: Bris accompanier in “The Tempest”] — whaaaaat? I don’t remember a mohel getting shipwrecked along with Alonso and Antonio in Act 1, and besides, Ferdinand is way too old to need a bris unless he’s converting, but why should Miranda and Prospero care? Oy, such stuff as dreams we are, boychik.

What’s happening here, it became clear, is that the first letter of every across clue has been changed, and the grid entries help you figure out what those first letters are meant to be. So, instead of  [1a: Bris accompanier in “The Tempest”] we’re meant to read it as [1a: Iris accompanier in “The Tempest”] — The Tempest features a masque in which Iris, goddess of the rainbow, Juno, queen of the gods, and CERES, goddess of agriculture and fertility, bless lovers Miranda and Ferdinand. I won’t clog up this post by specifying every letter shift, but the corrected first letters of each across clue produce the quotation acrostically, from [52a: Luthor {Author} who wrote this puzzle’s hidden quotation]: VOLTAIRE —

ILLUSION IS THE FIRST OF ALL PLEASURES

The letter generated a few funny clues, among which my favorites:

Once you get the mechanism, not too tough of a meta — maybe 2.5 Metaweeks on the Gaffney Scale — and certainly satisfying to see the quotation emerge. I admire Byron’s skill in finding a quotation with exactly as many letters as there are across entries, and in writing clues that work in both contexts. Your thoughts?