Well, it’s Father’s Day, and when I saw the WaPo was a meta, I was ready to answer “GOMEZ!” based on Evan’s last meta on Mother’s Day. After all, it is 5 letters. And… erm… it appears to be a city in Texas. Sorta. (I’m reaching here… don’t fact check me too hard).

But of course, that would all be ridiculous. Let’s see what’s going on here. 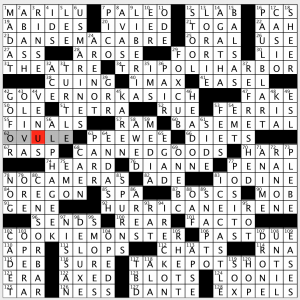 These are clearly the answers we’re supposed to examine, but what’s the deal with the parenthetical state at the end of each? That hint, coupled with the title, should leave the solver to solution step #1. In each, there is a well-known city hidden backwards.

CANNED GOODS = OGDEN (Had to infer that one. Never heard of OGDEN, Utah.)

Meta solving 101 should lead the solver to the next step: when you have a list of entries like 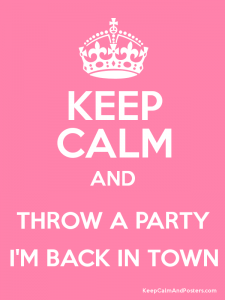 that, look at the first letters in order. Sure enough, they spell out a quintessential crossword phrase: AHA MOMENT.

And the last step should be clear from there. We’re looking for a 5-letter U.S. city. Is there one spelled backwards in AHA MOMENT? I’m guessing people from Nebraska wouldn’t have a problem seeing OMAHA right there.

This is a truly fantastic meta. Very tight. None of the theme answers seems overly obscure, each is two words, the cities are mostly well-known, and all of the cities “bridge” the two words. Last time Evan published a meta (click link at top of post), he fielded some criticism for its difficulty (and for publishing meta puzzles at all). I hope angsty solvers will take a second to enjoy and appreciate this one.

If this genre is new to you, I’d be remiss not to plug Matt Gaffney’s site where he publishes a weekly meta that increases in difficulty week-by-week. The first puzzle of every month is typically very easy. Evan’s puzzle here would likely be a week 2 level. 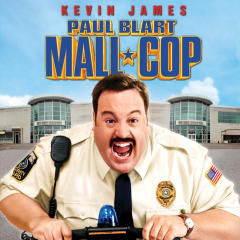 Haven’t seen it. Don’t want to see it. Yet PAUL BLART is very much in my vocabulary. Why is that?

Rest of the grid, of course, is smooth with fresh fill like ALPHA GEEK, CENSOR BAR, and PAUL BLART.

Besides my ON WRITING misstep that I mentioned above, my other one was when I started to fill in FESTER ADDAMS for 102A [TV character who once fantasized about eating the moon because it resembled his favorite snack (Alaska)]. In The Addams Family Musical, Fester falls in love with the moon (that’s not the stupidest part of the musical either). I figured maybe this tidbit was based on the show.

I stopped star rating Evan’s puzzles… but this deserves some 5 star props.

Joel Fagliano’s New York Times crossword, “Not In So Many Words (unthemed)”—Jenni’s review

1a is timely, but one entry does not make a theme, and this puzzle has no theme. Have we had an unthemed NY Sunday before? I look forward to Sunday wordplay, and I like my themelesses challenging. Sunday puzzles can’t be particularly difficult because they have to appeal to a wide audience, so this was not my favorite puzzle.

1a is [It was first officially designated in a 1966 Lyndon Johnson proclamation]. That would be FATHER’S DAY. 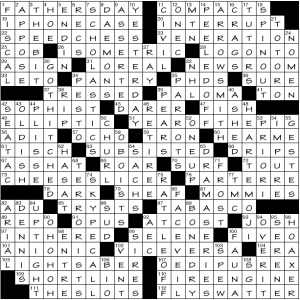 The last two entries in my list tell us this is a 21st century puzzle. Good thing, because ADIT, NOMEN, PLISSE, PARTERRE, APPOSE and ENTRE have a fusty air. THE SLOTS is kind of roll-your-own. FIRE ENGINE is perfectly fine but [Bright shade of red] is an odd clue for it. We have SOPHISTS and SCHOLASTICS for that academic touch.

It’s possible I’m cranky; I’m sitting in bed with my recently replaced knee wrapped in ice, so maybe I’m taking it out on the puzzle. I’ll be curious to see other reactions.

What I didn’t know before I did this puzzle: that L’OREAL is the world’s largest cosmetic company, and that someone named DENNIS co-owns Paddy’s Pub on the show “It’s Always Sunny in Philadelphia.” 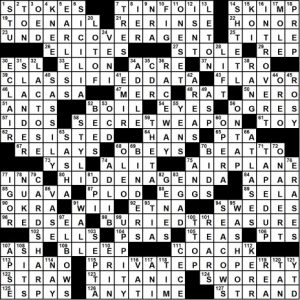 I got the theme generally, but not specifically,  as I sped through this puzzle. Ergo, let’s analyze as we look again at the fun clues and answers:

Those are some super horizontal ILSA’s, given the amount of Across theme matter this puzzle contains.  And then there are these Downers:

Theme feels familiar, but fun enough. I like wordplay themes, even if it’s the type that’s been done and done. INVISIBLE HAND was new to me as a base phrase. Actually, now that I Google the term, I recall hearing it in the past, but I guess it never sunk in.

Nice longer answers and ILSAs (to borrow Judge Vic’s term) include HANG GLIDERS, I AM SAM, and ILLUSIONISTS.

I’m a bit confused how 10D [Passed an oral exam?] gives us SAID AH, even with the question mark.

The middle west of the puzzle gave me some trouble too (I don’t know why I didn’t associate a REVUE with a satirical show… every definition that I scanned used some form of the word “satire” ).

Nice, light wordplay to start a Sunday. Enjoy the day! 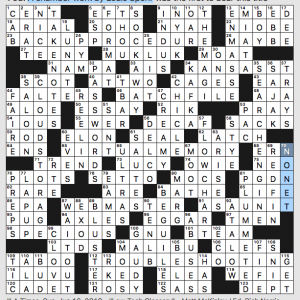 They all work (with the exception of CLOUD STORAGE, which is pretty weak) and they’re not all that entertaining.

What I didn’t know before I did this puzzle: that a chamber work by Louis Spohr was the first to bear the title NONET. It’s a pretty piece.