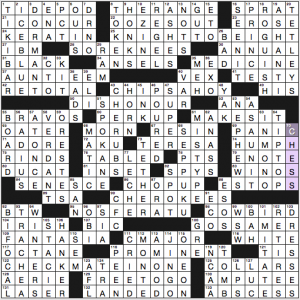 So this theme is something that doesn’t display well in the .puz format, but I don’t really care to spend more time eyeballing this puzzle by seeing how it plays in other formats. The notepad says “The print version of this puzzle contains multiple visual elements that this software cannot reproduce. We recommend using the New York Times app or desktop version, or printing out the PDF. The instructions in the print version read as follows: “The center of this puzzle represents a 70-Down/55-Down, in which you can achieve a 122-Across by moving the 25-Across.” What is visible from the theme in this format is:

Presumably the center of the grid has chessy action with shaded squares or something? Don’t care. Not into chess. Am into crosswords. Crosswords that work as crosswords. And there was too much sketchy fill in this puzzle to hold my interest. Chess aficionados who solved in another format, tell me how you liked the puzzle. I’m not looking it up because the chess angle just isn’t going to interest me much.

But it was offset by the clunkier stuff, like E-NOTE (nobody uses this term! constructors who use word lists, kill this entry), ESTOPS, EROSE, plural ANSELS (even though there is finally a second famous one), AKU ([When doubled, a Thor Heyerdahl book], for real?!), OATER, MATIC, AS A UNIT, plural TETLEYS, plus that ENA PCT CTO RETOTAL and plural OUIS combo in the opening section of the grid.The old Scowl-o-Meter rattled back to life here. I mean, what the heck is 11d. [Touch up, as styled hair], REGEL? It’s not a word, that’s what. And I’m not convinced that SORE KNEES is anything other than an arbitrary formulation. BAD KNEES and BUM KNEE feel better to me.

Note that the grid is 22×22 rather than the customary 21×21. If the puzzle took you a bit longer than your average, that’s why.

2.5 stars from me, without seeing whatever the other formats present. 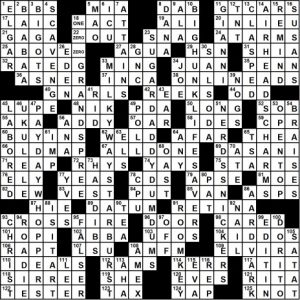 From two vets who’ve teamed up a good bit over time, a 144-answer grid, with a few too many blocks–a sign that filling the grid may have been difficult. I’m thinking a 23 x 23 may have been needed for this theme.

Not certain what the crush is (I misread it first as crunch), but you can’t miss the candy.

First, we must look at these three items:

That done, we know that a 100 will be in play somewhere and we are now ready to look at the following:

There is some other high-quality stuff of note:

There is some stuff I’d rather not note:

There are also 44 three-letter entries, and quite of few of them are–well, you know.

What an ambitious enterprise! Though, I am still unclear what the crush is–unless it’s just that there is a lot of candy in this puzzle.

P.S.–The law of unintended circumstances at play? The Crossword Compiler solution grid has the word ZERO in successive vertical blocks. I loved Zero candy bars when I was a kid! 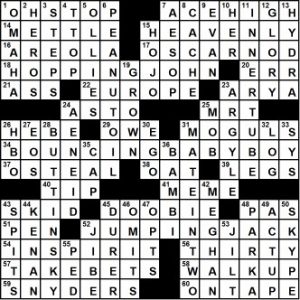 In this grid, which has 72 answers, 11 of which are 8 letters long or longer (the benchmarks, imo, of a themeless puzzle), a clever 3-unit theme runs:

Could it be that some friend or family member of David’s has recently had twin sons? And named them Jack and John?

Paid for with EOS, PED, SYS, HEBE, and OSTEAL. Still, a most effective effort overall!

P.S. — Just finished solving the NYT. What are the odds that MATE-IN-TWO and MATE-IN-ONE would bed in two different puzzles published on the same day?

Jim is getting ready to bike all over the UK, so I’ll be covering the Washington Post puzzles until he gets back. This is fun one to start with! Each theme answer is a two-word phrase that starts with the letters in the clue…it’s more fun to do than to explain. Let’s see: 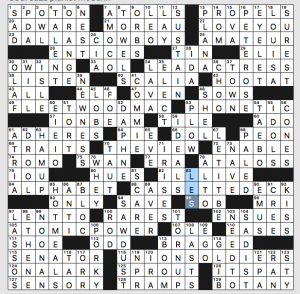 It’s not a particularly tricky theme, which is fine. It’s fresh and fun and all the answers are solidly in the language.

What I didn’t now before I did this puzzle: that The Cars bassist is Benjamin ORR (yay! Not a hockey clue!)

Also: props to Evan for cluing SHOE and SENATOR with women (WNBA stars and Gillibrand, Harris, and Warren, respectively).

I leave you with this song, which Evan pointed out is particularly apt for this puzzle.

Each theme answer adds “ly” to a base phrase – deliberate-ly. 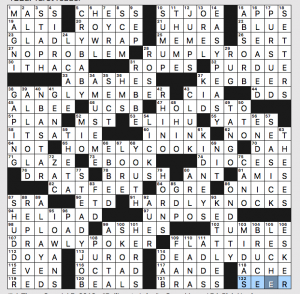 All the base phrases are solid and the wacky entries are amusing. A fun Sunday theme.

What I didn’t know before I did this puzzle: that Thor has a son named MAGNI, at least in the comics.