I thought I had figured out the theme when I filled in the first theme answer. I was wrong.

All the theme answers are two-word phrases that start with P___ G___.  I figured it was something to do with movie ratings. 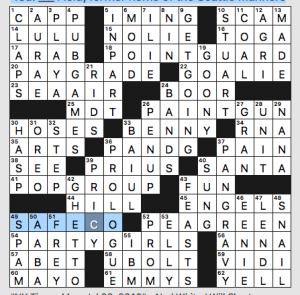 I realized I was wrong about the theme in the middle: 36a [Consumer products giant, for short … or a hint to the answers to the eight starred clues] is P AND G (Procter and Gamble). A nice, accessible Monday theme, solidly constructed and well-clued. I’ll take it.

What I didn’t know before I did this puzzle: that Magic Johnson and Steph Curry are POINT GUARDs. Not a basketball fan. 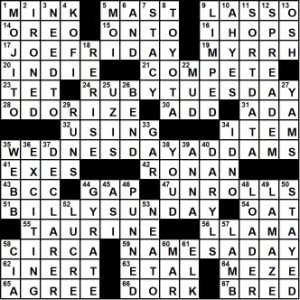 As per the title, this puzzle has four words that are indeed seen in a week. Let’s start with the reveal:

Stuff that bugged me, besides having only four of the seven days covered:

We have a Monday-simple, but Zhouqin-smooth grid today in which she’s found phrases that hide the word GAG (61d, [Joke hidden in the starred answers]). 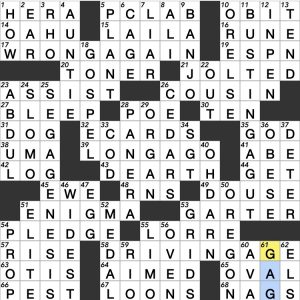 A fun example of the “hidden word” theme type. If I was to pick a nit, it would be that all of the GAGs are preceded by an N except the last one. It would be more elegant if a greater variety of examples was found.

With the theme entries in a pinwheel pattern, there isn’t room for any long fill answers, but the mid-length entries are strong: COUSIN, GOSPEL, DEARTH, ENIGMA, GARTER, AUNTIE, OREGON, JOLTED, BANJO.

I liked the crossing of LAILA (15a) and ALI with its factual clue [With 8-Down, boxer who retired undefeated]. I also had no idea that Jenny McCarthy is Melissa McCarthy’s COUSIN. And cluing OBESE with respect to a fictional character [Like Jabba the Hutt], is far more welcome than trying to be cutesy with it.

Is this possibly a debut puzzle? I can’t find a record of Jennifer Marra anywhere in Fiend’s database; if so, hooray! Congrats + yay for seeing a woman’s byline. 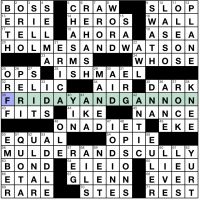 A consistent theme of investigating duos who, somehow, have name pairs that add up to 15 letters (once AND is included). Brava for finding those!

It’s certainly a straightforward theme, which is what you want in a Monday puzzle. My only gripe, perhaps, is that the themers + other fill/cluing seem dated. Or rather, it feels like this exact puzzle could have be published in the 90’s. We at least had GLENN Close referenced by her 2017 movie “The Wife”, but that modernity stood out in an otherwise OPIE OLEOS NEET-filled puzzle.

Other random thoughts:
– Loved the clue for BOND ([Tight connection, as between mother and baby]). Women are obviously so much more than just mothers, but I’d be surprised to see a male constructor or editor think about this as a way to clue BOND.
– I was also glad to see SELMA and its importance referenced in the grid!
– Yay for inclusions like GLENN Close, ERICA Jong, and ANNE Frank. These aren’t women who show up in grids as often, so I was glad to see them.