I love Lynn Lempel’s puzzles. It’s always a joy to see her name next to a Monday puzzle, and this one was no exception. I particularly love a Monday puzzle when I can’t figure out the theme until I get to the revealer, and this was one of those. 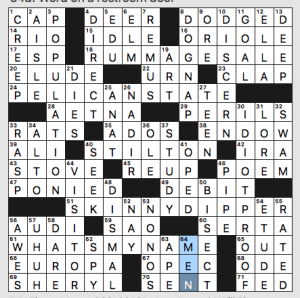 What do these have in common? Lynn tells us at 61a [Fairy tale question whose answer is spelled out in the starts of 18-, 24-, 40- and 51-Across]. That would be RUM PEL STILT SKIN, from the fairy tale about the little man who could spin straw into gold.

What I didn’t know before I did this puzzle: that Louisiana is the PELICAN STATE. I also didn’t know that Muhammed ALI said “Silence is golden when you can’t think of a good answer.” 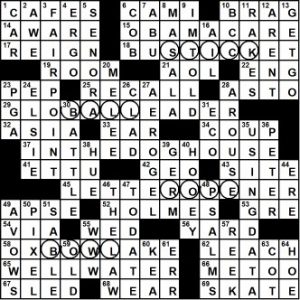 THEME: The title is “Pet Store.” The reveal is IN THE DOGHOUSE. The theme answers are BUS TICKET,  BUS TICKET, LETTER OPENER, and OXBOW LAKE, with internal circles highlighting things that might be kept in a doghouse: bowl, rope, ball, stick.

I noted nothing horrible in the fill.

A fine example of what a Monday grid should be: smooth, breezy, and with a cute, but not trite, theme. 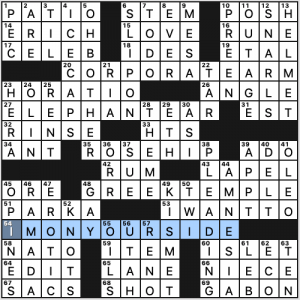 Note that the revealer is 12 letters long, which is not ideal from a constructor’s standpoint. It means that said revealer can’t go in rows 13, 14, or 15, and consequently all the theme entries get squished together in the middle of the grid, in this case with only one row between each entry.

But the grid is helped by a short 7-letter entry in the middle, and of course, the constructor’s deft hand at smoothing out the rough spots. Indeed there’s a lot of non-theme fill to love here: HORATIO, “I WANT TO!”, ICE CAPS, AMNESIA, KISMET, and, my favorite, “OH, BOTHER!” [Winnie-the-Pooh exclamation].

The only thing I’m giving the side-eye is 50a TWI [___-night double-header]. That’s new to me, but it appears to be a valid baseball term in which the first game is played in the late afternoon and the second game starts well after dark presumably.

And there’s only one clue I’ll point out: 29d [Ordinal number ending]. ETH. Huh? I guess for “twentieth”, “thirtieth”, etc. But that has to be a pretty small percentage of ordinal numbers.

Quick and fun grid with a cute theme and fun fill. Four stars. 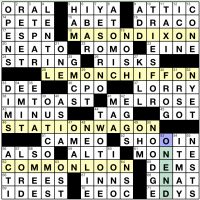 18A: MASON DIXON [___ line: 18th-century dispute-resolving state border] – From the Wikipedia page, for those not in the know: “After Pennsylvania abolished slavery, [the Mason-Dixon line] served as a demarcation line for the legality of slavery.” : /
28A: LEMON CHIFFON [Fluffy, citrusy pie]
46A: STATION WAGON [Family car largely replaced by the minivan and SUV]
62A: COMMON LOON [Ordinary-sounding state bird of Minnesota]
53D: ON END [Without a break … or what each word in 18-, 28-, 46- and 62-Across has]

This felt solid as a consistent theme (each word in each theme entry ends in -ON) and I appreciated that all theme entries are solidly in-the-language. The only change I might have made was to more directly acknowledge slavery instead of just saying that the line was generically “dispute-resolving.”

Other thoughts:
– Aside from a reference to a “mom” in the clue for 38A, NELLIE Bly is the only woman referenced at all in this entire puzzle (grid or clues)! Compare that to PETE Seeger, DRACO Malfoy, Tony ROMO, Kermit, Dmitri in the top half of the puzzle alone. Even without updating word lists to include more women-referencing fill, there’s a lot that can be done with cluing to include more women. Hopefully male constructors will get this on their radar.
– Liked: HIYA, YESORNO
– Didn’t quite like: EEOC, IDEST, ALTI, IBAR
– New to me: NOODGE 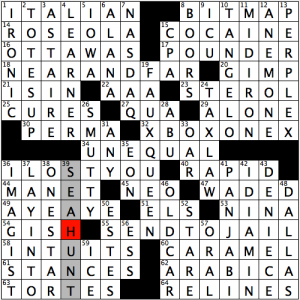 With its hyper-Scrabbly letters and relative recency, the marquee entry in this one is pretty obviously 19d, FAUX QUEEN [Drag culture entertainer described as a “female impersonator impersonator”]. Per Wikipedia, a faux queen is a “female performance artist who adopts the style typical of male drag queens.” Nicely, it crosses XBOX ONE X [PSP 4 Pro alternative] at the X.

Other interesting entries in this one include NEAR AND FAR, SEND TO JAIL (I’m on the fence about whether I like this entry or not), I LOST YOU (with the weird and slightly duped clue [“Repeat that, I was in a bad cell”]), and TAX LAW. I got hung up a bit in the NW corner when I put ROSACEA in for ROSEOLA [Rash type], which crossed an ALANA I hadn’t heard of [Surfer/model Blanchard].

Favorite clue was one that saved the otherwise gluey entry IS IN:[“Camping ___ tents!” (slogan on a novelty t-shirt)]. 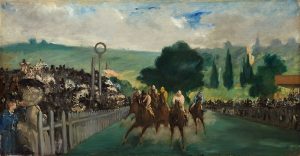 The Races at Longchamp by Édouard MANET

Didn’t love seeing IDI AMIN and GIMP. The crossing of GISH [Debut Smashing Pumpkins album] and SEA HUNT [Lloyd Bridges TV series set on a boat called the Argonaut] was the last thing I entered, and it was an educated guess.

Not my favorite BEQ themeless, but there’s always next week! See you then!

Very quickly to get it posted: Here’s the solution grid for Natan’s puzzle. 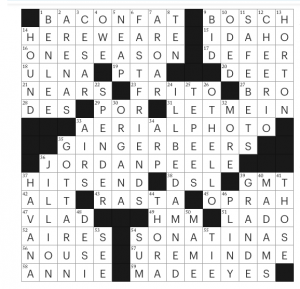 I really like the center stack of AERIAL PHOTO/GINGER BEERS/JORDAN PEELE, except for the plural BEERS which is just odd.

Favorite clue: 1a [Result of some renderings] for BACON FAT.

Objections already raised in comments: [Buds that blossom quickly] at 6d is a cute clue for FAST FRIENDS, but that’s not what the phrase actually means.

What I didn’t know before I did this puzzle: that “Napoleon Dynamite” is set in IDAHO.