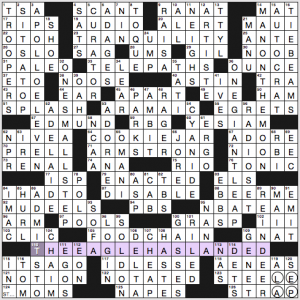 I like the extension of the STEP and LEAP to the visual representation of their respective sizes/impacts. Also want COOKIE JAR to be thematic, since the grid’s got that stacked right on ARMSTRONG. Anyone have a good recipe for moon cookies?

The fill’s got some rough spots (your plural UMS and DETS, for example), but overall pretty solid. Four stars from me. 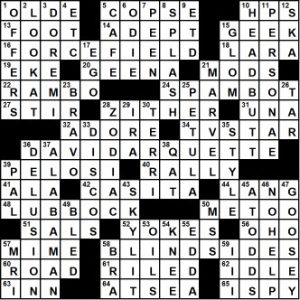 THEME: Two of my friends team up for something special here. The first two and last two letters of the theme answers create four-letter words that can follow blind. Check it out, starting with the reveal:

Clever! Entertaining. Unusual. And, at 10-7-13-7-10, pretty dense. Other stuff that merits mention includes:

That’s a lot of good fill to go with a dense theme! 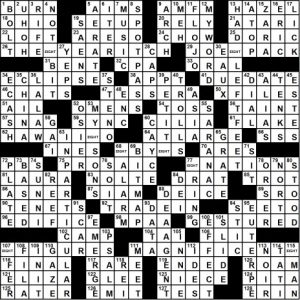 THEME: What a delight to work out this extremely clever theme from one of my oldest friends in the biz–Alan Olschwang, Esq., of Southern California! How do I explain it?

Well, consider that THE 7-YEAR ITCH crosses NOT 1 BIT at the numbers and, pursuant to a directive in the cluing, the solver is to add two numbers and use their sum at the crossing. Now, see title. See also the following:

In the solution grid, you will see eight written in, rather than the digit. An argument can be made that some of the entries’s usage in the language call for digits, and some call for spelled-out numbers. Forget that! This, to me, seems like a brilliant piece of cruciverbalism.

Good fill! I’m not saying there is no marginal fill. See, if you must

You know what? I felt like I had to scrape through the grid to find these eight items, as they were not jumping out at me as I solved. Possibly because I was enjoying the theme answers and the non-theme fill highlighted before the immediately preceding list so much. That, I believe, tells me the above eight were a cheap price to pay for this nice puzzle.

Way to go, Alan and David!

I liked this puzzle a lot. It took me a while to grok the theme, and I had to go back and track down some of the theme answers that I’d filled in without understanding what was going on.

Each theme answer turns a corner, and the clue gives the direction of the turn. 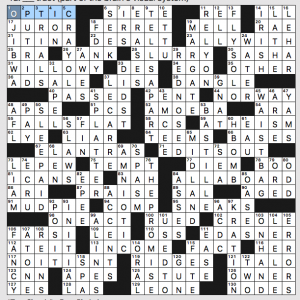 Very elegant! Each answer is the geographically correct quadrant of the puzzle and each one has a standard word before the turn. I enjoyed finding them after I’d finished the puzzle.

What I didn’t know before I did this puzzle: see above re: “When in Rome.” I also had never heard of SASHA Velour, and I have no idea who LISA and Johnny are in the “The Room.” (update: they are two of the protagonists of a 2003 film).

I leave you with “The Promise.”

This was a slog. I didn’t understand the theme until I was almost done, and it wouldn’t have helped if I had. There were some very obscure words, starting with 1d, which you can see in the grid I had to reveal. I suppose if you were raised on the story of the Magi and knew that one of them was named CASPAR, that would have helped, but COIGN really doesn’t look like a normal word – I’ve never seen it before – and the clue [__ of vantage: favorable position] didn’t help at all.

So the theme. Did you know that yesterday was the 50th anniversary of the first moon landing? Both the NYT and LAT decided to get in on the anniversary action, even if it is a day late. The revealer at 111a explains the theme: [Arrive as astronauts did 7/20/69 … and what’s literally seen in seven pairs of puzzle answers]. It is, of course, LAND ON THE MOON. Each theme clue is a body in the solar system and each answer is one of that body’s moons. ETA: thanks to the commenter who pointed out that the word “land” sits above each moon. This takes it from “not terrible” to “good” as far as the theme goes, and the added constraints probably explain the horrible fill, but the fill is still horrible. 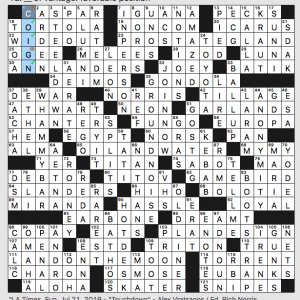 They’re in order from closest to furthest away from the sun, although we’re missing Mercury and Venus because they don’t have moons. It’s not a terrible theme. I’m not the space geek in the family so I had to get most of them from crossings – TITAN and EUROPA were the only ones I knew. Ok, I know LUNA but I don’t usually think of it as the name of the moon; the moon is just the moon because I’m terrocentric. It’s also confusing to have the theme answers not be the longest ones in the puzzle, but the upper-case clues make that easier.

The theme isn’t terrible. The fill, on the other hand…in addition to COIGN, we have ADNOUN, clued as [“Meek,” in “Blessed are the meek”]. Wikipedia tells me that’s a “word that is usually an adjective but is being used as a noun.” In this sentence, it’s standing in for “meek people.” I am not a grammar professional, but I consider myself a fairly sophisticated amateur and I have never seen this word before, nor do I consider myself enriched by having seen it here. We also have TILLAGE for [Farmwork] and I assume I’m not the only one who put in TILLING first. Plus we have GDP DSM ESA ACS MMA RBI CALC, the nonstandard abbreviation S DAK, and [Sicily’s only landlocked province], ENNA. And has anyone under forty heard of Bob EUBANKS and “The Newlywed Game?”