This appears to be a WSJ debut, though Joe Deeney has had quite a number of grids in the LAT and NYT the past couple of years.

The theme is phrases whose last word ends in -ACT. This is separated out (mentally) so that the entire entry becomes the purported name of some Congressional product. Wacky clues ensue. 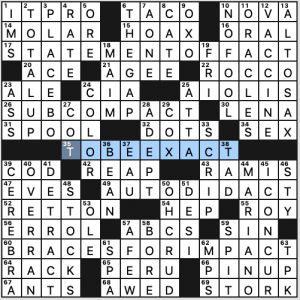 Most of these felt pretty strained to me. The second and fifth ones feel somewhat plausible (although the last one’s clue is a bit of a mouthful (ha!)), but a law scheduling a breakup? A law blaming the car? Huh?

Never mind that the word AUTODIDACT (noun – A self-taught person) is entirely new to me, and so I doubted that entire middle right section. I wanted AUTODETECT, but that obviously didn’t fit with the theme. But even if I knew the word, AUTO-DID ACT is just entirely too awkward.

I wanted to like this, because I like themes that take existing phrases and mess around with them. But it all just felt too forced.

Nothing overly sparkly in the fill, but those big open corners in the NE and SW are solidly-filled. A VACCINE is always good, and I liked CEREBRA and Mary Lou RETTON. Plus, “OH CRUD“, “I CONCUR“, and PLACEBO.

I like the attempt at wordplay here, but it just didn’t work for me. 2.8 stars. 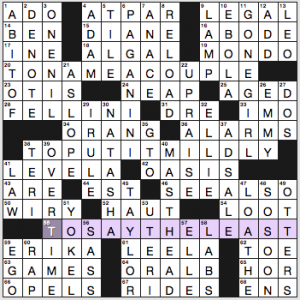 Three (semi-)idiomatic phrases starting with TO {VERB} make up the theme, clued as if they were tasks for specific people:

Did not know: 30d. [“Sesame Street” baby Muppet], NATASHA. Also did not know and don’t think is a good entry: 41a. [Like the most protective hazmat suits], LEVEL A.

LOATHE might be a strong word, but my enjoyment of the puzzle was dampened considerably by too much of the fill: AT PAR, IN E, ALGAL, NEAP, ORANG (who uses this “informally”??), HOR, OPELS, ENS, ONE-NIL, ASLOPE, “I RULE” (dumb clue, as [Cry with a fist pump] should be “YESSS!” and I can’t really imagine anyone shouting “I rule!”), AN ACE, UTERI, UPRAISE, and AD SALE. That is far too many “meh” entries to cram into one 15×15 grid.

2.75 stars from me, mainly because of the fill. 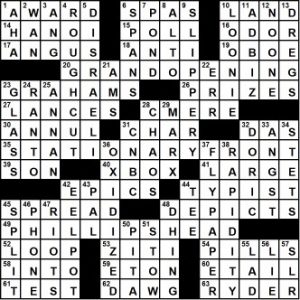 THEME: The last word of each of the three theme answers is a first synonym.

Watch out for this guy, Newman. he’s got potential!

Scrambled letters across the middle of theme answers as a theme concept really feels like it appears far more often than I care for, possibly because of other similarly oft repeated theme types being phased out? That isn’t this puzzle’s fault, of course. Anyway, there is a lot of gymnastics you have to do after the fact to make sense of the theme, but they felt extraneous to the puzzle itself. To wit, each circled letter set must be anagrammed to make a phrase that matches “___ bag”, a mixed bag – PERPA = PAPER; RACEMA = CAMERA; ARTHS = TRASH; and ANGTERM = GARMENT. Hiding such long bags, even anagrammed, is quite a challenge, so it’s not surprising SUPERPAC is the most splashy of the entries. HORACEMANN I know only from crosswords, though his importance is largely local to the USA. SLANGTERMS is the only plural, FWIW. 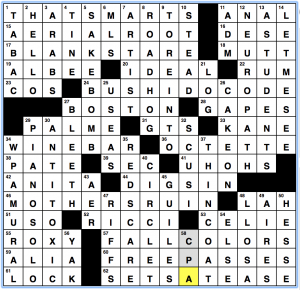 It was a delight to see that this week’s AVCX was a themeless when the puzzle arrived in my inbox last night.  Kam’s cluing felt “looser” this time around, for lack of a better term.  Let’s peek under the hood of this grid:

It doesn’t include a PIANO SOLO, but “Fingertips, pt. II” was Stevie Wonder’s first #1 single

Happy Wednesday, all!  See you in a few hours for the NYT Thursday puzzle.