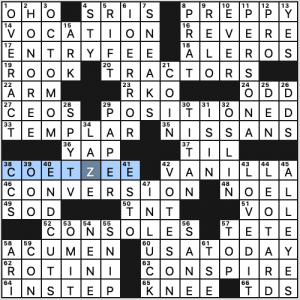 At first I thought this was the only revealer, and when I started adding PRO to the appropriate theme entries, I thought it was a rather lackluster theme and was going to get old pretty quickly.

But once I realized all the referenced entries were up top, I had an a-ha moment and figured out there would be a CON to this grid as well…except, I was expecting CON to be added the same way PRO was. That was not the case.

The clue for 59d CON reads [It’s a minus, and what must be subtracted from 46-, 52- and 63-Across]. A-ha. Those entries already have the CON added in and we must (mentally) eliminate them to make sense of the clue.

Cute! I thought that last little twist made the theme and brought it all together in one neat little “a-ha moment” package.

Oh hey! I just noticed the great big pluses and minuses in the grid itself, three of the former and four or six of the latter, depending on whether a minus is two- or three-blocks long. I guess you could say this puzzle has more minuses than pluses. (Our constructors set themselves up for that one!)

My solve proceeded fairly smoothly as I enjoyed entries like OCTOMOM, PERSONA, TEMPLAR, VANILLA, ENTRY FEE, USA TODAY, and LOVED IT. Some good cluing added to the fun.

But then I came to 38a [Nobel-winning author of “Disgrace”] crossing on old television show [Hidden camera show of 2001-02] and Latin phrase [“___ perpetua” (Idaho motto)]. The author’s name (COETZEE) is completely new to me; I don’t think I’ve ever seen it, so I was reliant solely on crossings. At least SPY TV is inferable, but my Latin is rusty; was it ASTO? ESTO? ISTO? OSTO? or USTO? Oh wait. Is it even Latin? Spanish? Italian? I think that last crossing is a touch on the unfair side.

But actually, my error was more stupid. I had LASE instead of LAZE at 34d [Take it easy]. That’s entirely my fault as my brain pronounces those words the same way, and my eye didn’t see the problem.

Fun puzzle providing layers of a-has and with a touch of elegance in the grid-art department. 3.8 stars. 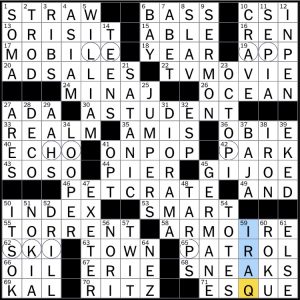 This Thursday’s NYT puzzle is from Erik Agard and Andy Kravis, and it’s pretty fantastic.  I could spot what was going on with the first theme clue, but it took me a little bit to figure out the exact execution throughout the grid.

Each row with circled letters has two clues working together across the three sets of grid blanks:

We have JUMPERS in multiple ways in the across clues here – the answer to 17A, 40A, and 62A “jumps” across to finish itself in 19A, 42A, and 64A, respectively, to make MOBILE APP, ECHO PARK, and SKI PATROL.  Then, each of those entries contains a type of jump (LEAP, HOP, SKIP) that completes the clued phrases for 18A, 41A, and 63A — LEAP YEAR, HOP ON POP, and SKIP TOWN. The grid construction on this is super clean, which made this even more of a pleasure to solve 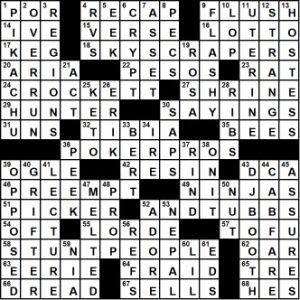 Cool theme. Lots of other solid, well-clued stuff, as one might expect. Including:

Keep an eye on this Agard guy. he’s going places. 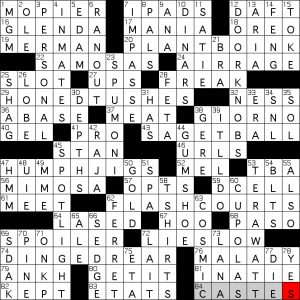 joon here with the review of team fiend’s own jim peredo‘s fireball crossword. the “insider trading” here refers to the two words that make up the base phrase of each theme answer trading their insides, i.e. everything but the first and last letters. hilarity ensues! to wit:

so that’s a lot of theme—7 theme answers, one of which is split into two parts, for a 17×17 grid. overall i’d classify the theme answers as more surprising than laugh-out-loud funny. something like MOPIER CASTES is just two words you can clue rather than an amusing mental image. i did enjoy PLANT BOINK and HONED TUSHES. 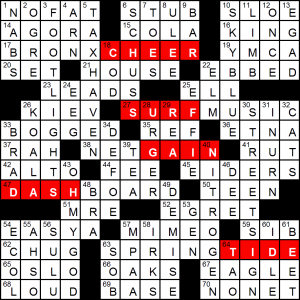 I think I’ve seen this theme many many times before: US detergent brands that are simple words are found in other phrases. One wrinkle is today’s are reclued “?” style, which helps offset the fact that the answer alternate between the first and second parts. I think I’ve only seen Surf on sale here, but I’m sure American constructors wouldn’t mind if Omo became available stateside.

Quite a quiet grid in the main, though with a few hoary “favourites” like ARN, ULEE and MIMEO rearing their head. I’m also unable to think of a single reason to use the word URGER.

Spotlight on the Cambridge FOOTLIGHTS, which launched a number of successful acting careers: 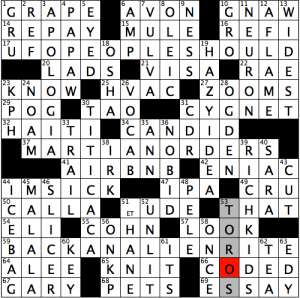 If you’re wondering why BEQ wrote an Area 51-themed puzzle today, read this and then come back.

And then a secret hidden alien at, well, square (area) 51:

Clever and fun. That’s really all I’ve got about this one. Until next time!