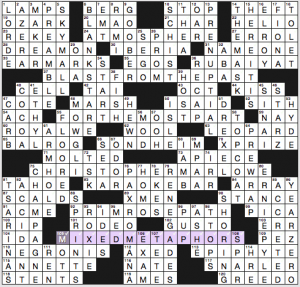 I’m torn on this puzzle. On one hand, it’s smooth, with a consistent theme containing crisp entries and fill that’s mostly pretty darn good. On the other hand, the theme is sort beside the point for the solve—it’s just an assortment of words and phrases that contain (against all odds!) the letters in METAPHORS all scrambled up, in 9-letter chunks. It’s a nice find, and the cryptic crossword vibe of MIXED METAPHORS (105a. [Some laughable language mistakes – as found literally (in consecutive letters) in 24-, 37-, 55-, 75- and 92-Across]) is solid, but is it fun? Not really. Here are the themers:

Favorite fill: “DREAM ON,” “NAME ONE,” the RUBAIYAT of Omar Khayyam, Tolkien’s BALROG, the XPRIZE, KARAOKE BAR, NEGRONIS (that cocktail is an apéritif!), SKYMALL (bankrupt in 2015, but still a going concern! and no, they don’t still sell that hot dog and bun toaster gadget), MOWGLI, BLANK STARE, GOOBER, PAX ROMANA, SCHIST, PRENUPTIAL, THE MASK, TOPCOAT, “HERE IT IS,” and the YEAR ZERO. This is more flavor than a great many 21×21 puzzles have. 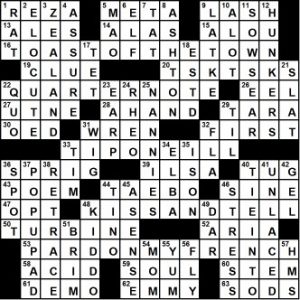 THEME: The first words of the theme answers can follow French in recognized phrases.

The cost–A LOT, A HAND, A SENSE, IS ON, TET, DAR, HMS and the 7-consonant, pluralized TSK TSKS–did not bother me while solving (in record time), but on looking closely after, there they were.

Each theme answer ends with a game relevant to the profession mentioned in the clue, making us rethink familiar phrases. 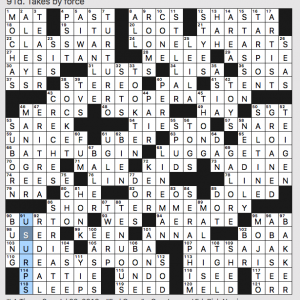 All the theme answers are solid. It’s a fresh, funny theme. Nice. There were a few things that made me roll my eyes in the fill, but I didn’t take notes and can’t find them now, so they can’t have been that bad.

What I didn’t know before I did this puzzle: that Bizet wrote an opera featuring the priestess LEILA. It’s “Les Pêcheurs des Perles,” and I have heard of the opera, if only because it’s mentioned in a Michener novel I read in high school.

It’s odd that we have a moon landing-themed puzzle a week after the anniversary, especially when last Sunday’s puzzle was not a moon-landing themed puzzle. Curious.

Anyhoo, the theme is MEN WALK ON MOON (115a, [New York Times headline from 50 years ago on 7/21/69, and a hint to five two-row arrangements in this puzzle]). So what are we looking for? Well, we need to find the names of moons in the grid (from elsewhere in the solar system), look above each, and we should find words roughly synonymous with “a man.” Thankfully, the clues give us plenty of parenthetical hints as to where to look by identifying which word is the “man” and what planet the moon orbits. 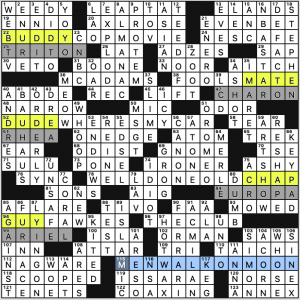 Nicely constructed theme. It must have been difficult to find just the right way to stack all the theme answers, especially six-letter moons like TRITON, CHARON, and EUROPA, but for the most part, it’s very smooth.

On the rougher side we had: DREA, AITCH, IRONER, AFLARE, ATTAR, and variant ENURE. Rougher, yes, but nothing beyond the pale. 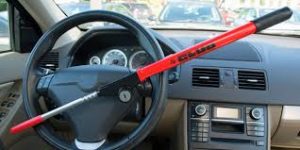 Overall, solid theme, strongly executed with fun fill throughout. Fairly heavy on the testosterone side though. 3.9 stars.

Today Evan serves us a complex theme that combines clues and answers. Circles in the grid help us figure it out. 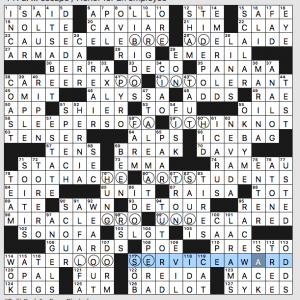 And just in case you didn’t figure it out, Evan offers a helping hand: 69a [Word that, when preceding this puzzle’s split words, forms the phrases with split clues] is, of course, BREAK.

I really liked this theme despite my raised eyebrow at BREAK FAITH.

What I didn’t know before I did this puzzle: that Sonic the Hedgehog features the Chaos EMERALD.

Evan sent me a music video with a note saying DO NOT CLICK UNTIL YOU’VE SOLVED THE PUZZLE. I thought it would be this one, but it’s actually this, and Evan is probably horrified at my assumption.