I had no idea what the theme was until I filled in the revealer. I didn’t need to know it in order to solve the puzzle. It’s a good Monday theme – not tricky, with a reasonably satisfying “aha” moment for an easy puzzle. 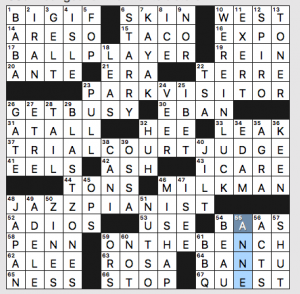 That said, there’s an egregious dupe in 63a, [Parks in civil rights history] with PARK in a theme answer. There are other ways to clue ROSA.

What I didn’t know before I did this puzzle: that ANNE Bronte was the youngest of the sisters. 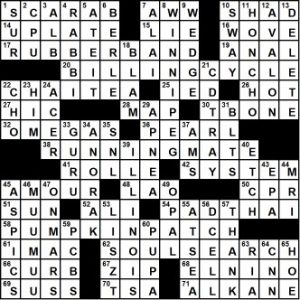 THEME:
“Spirit” in the title refers to soul in the reveal, I think:

From which it then follows that soul has a place in these entries:

The symmetrically-placed PAD THAI and CHAI TEA form a nice mini-theme. And  ILLINOIS and WINNIPEG  are not awful as long verticals

Andy here, fresh off a wonderful weekend at Boswords! I highly recommend buying the tournament puzzles and solving them tout de suite — from first to last, they’re exceptionally well-made and fun to solve!

Anyway, no review today (and potentially also Thursday) because Brendan has to rerun some old puzzles for what he calls “BORING REASONS”. If you’re looking for a recap/explanation of the puzzle he posted today (which was his Boswords 2018 puzzle), you can read Ade’s write-up from last year here.

The puzzle posted really late this morning. On the WSJ website, it says it posted at midnight Eastern, but it was more like 9 a.m, I’d wager. And solving in their web app, it still showed the buttons for “Submit” and “Contest Info” as if this was the Friday contest puzzle. And lastly, it didn’t give me any Congratulations for completing the puzzle as it normally does. It could be that there’s an error in my grid below, but I can’t find it.

Regardless, we have another nice Burnikel grid to consider. Let’s take a look.

DROPPED CALL (25d, [Weak signal result, and an apt description of a word hidden in 3-, 8-, 18- and 20-Down]) is our revealer. Sure enough CALL is found in the Down direction of each of those entries. 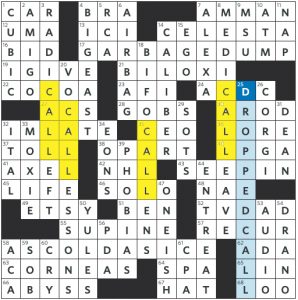 So that’s half the themers that felt a little iffy to me. The other thing was that I had a different expectation of the theme based on the word “drop”. For me, “dropping” doesn’t just mean going in the Down direction, but that something is falling from its previous level. That is, I expected the theme entries to be in the Across direction and then CALL to turn and fall in the Down direction. Failing that, I thought that, looking at the grid as a whole, the CALL portions would stair-step down going from left to right. This is the case with the first three entries, but then suddenly, CALL was back up to its starting level in MEDICAL LEAVE.

Granted, these expectations are based on my experience with other crossword puzzles, and there’s nothing here that says “dropping” can’t just mean going in the Down direction. Ergo, my expectations shouldn’t enter into it. And it is a Monday, which means themes and a grids are generally more straightforward.

As for the rest of the grid, it’s lively as usual, per Zhouqin’s standard. I’m liking GARBAGE DUMP, AS COLD AS ICE, “I’M LATE!”, PHOBIAS, CORNEAS, CALIBER, SUPINE, AIRBAG, BIG EAST, MOXIE, and ALEXA crossing BILOXI (where I lived for four sweaty years and where two of my children were born).

Tough for a Monday (for me, anyway) was the CELESTA (14a [“Dance of the Sugar Plum Fairy” instrument]), but I’m glad to learn about it. I also found out it’s the same instrument used at the opening of Mister Rogers’ Neighborhood.

Taken on its own, this is a fine puzzle, though a couple of the themers felt a little forced. 3.4 stars. 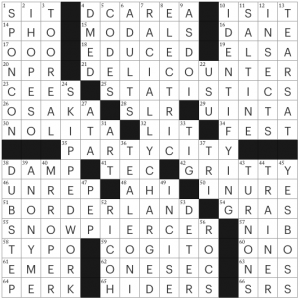 What are the odds of having SPONCON (short for sponsored content, and no, I didn’t know the term) in two puzzles so close together? I know I just encountered this entry a few days ago.

Another Mark McClain Monday in the LAT – let’s see what he has for us today: 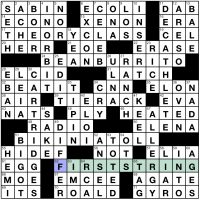 17A: THEORY CLASS [Music course for budding composers]
24A: BEAN BURRITO [Meatless taqueria item]
39A: TIE RACK [Closet accessory for neckwear]
51A: BIKINI ATOLL [Marshall Islands site of nuclear testing]
62A: FIRST STRING [Like the starting team, and a hint to the answers to starred clues]

I like this theme – the FIRST word in each themer is associated with STRING: string theory, string bean, string tie, and string bikini. I also appreciate that different understandings of the word string were explored throughout.

Random thoughts:
– I appreciate the vaccine shout out at 1A. The reason worldwide epidemics have been conquered time after time is because of vaccines. They work. And there are enough people who can’t get vaccinated (because of their compromised immune systems) that it is contingent on the rest of us to get vaccinated to build herd immunity and keep them safe.
– I also liked the timely meatless food plug at 24A – it’s all the rage! Have any of you tried the Impossible Burger? I’m told it’s pretty good.
– Yaaas for calling out Archie Bunker as a BIGOT at 51A. Not “racially charged” – racist.
– Which women are in today’s grid? EVA Peron, ELENA Kagan, and Eve (though clued via her role as a mother). Some pretty powerful and influential women – which is nice to see! As always, what would be nicer to see would be more women – and at least parity with the several many men scattered throughout the grid.