Title: “Come See About Me”
Prompt: The meta for this puzzle is an alternative rock hit.
Answer: “Basket Case” by Green Day 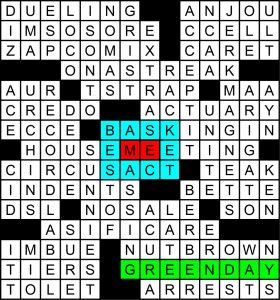 Unusual grid size of 14×15, which was probably done to accommodate the 12-letter central entry of HOUSE MEETING [Chore-allocating session]. The pinwheel of ZAP COMIX, JERK MAGNETS, NUT BROWN, and RECORD LABEL could certainly have been theme material, but not a sure thing.

What could HOUSE MEETING mean? I looked around for kinds of houses — can you call a record label a “record house?” Google says maybe sort of, and NUTHOUSE could be a thing, but with JERKHOUSE and ZAPHOUSE that theory falls apart.

At this point I noticed that the central entry’s string of SEMEE could be a cryptic crossword-style interpretation of the title since you’ve got SEE “about” (i.e., around) ME. But I didn’t see the pattern repeated elsewhere so abandoned this line of thought. Another dead end in the vicinity was the Bill Withers hit “USE ME” hidden in that selfsame central across, but that led nowhere either. And then I noticed that the top row comes close to spelling the hit song “Dueling Banjos,” but again the trail ended quickly.

The grid is so wide-open, Scrabbly, and clean that I didn’t think Pete could have worked much theme material into it. In addition to the central across and the four long entries in the pinwheel mentioned above, EXTRA SEC, CIRCUS ACT, AS IF I CARE, ON A STREAK, NO SALE, GREEN DAY, and BEST OF were all excellent fill, so unlikely to be able to bear much in the way of theme constraints.

After a couple of fruitless half-hour sessions, I decided on my third go to scrutinize the clues more closely since Pete often drops an easy-to-miss hint in there. And lo and behold, the clue for GREEN DAY is [Alternative rock band with four Grammys]. I had noticed in my earlier scan that GREEN TEA would have been superior to GREEN DAY there on the crossings but hadn’t followed up on it; but now, with Pete specifically using the phrase “alternative rock band” in the clue, combined with “alternative rock” in the instructions, made me look at this one again.

Feeling a bit of backsolver’s guilt I Wikipediaed the list of hit singles by Green Day to see if any of the titles seemed evocative. “Longview”? “When I Come Around”? “The Time of Your Life”? “Basket Case”? “Hitchin’ a Ride”? — hey, wait a second, rewind a bit. I remembered seeing BASK in the grid — and there it is in BASKING IN at 32-A. That’s close to “Basket Case” — and there’s an ET on the line below it. Is there a CASE anywhere? Not that I can — oh wait, there it is! The ten letters in BASKET CASE circle the central ME in the grid.

That had to be right, but I wasn’t quite sure how the title worked. “About Me” must = “around the letters ME” — OK, now I get it. It’s like “Solver, come see the letters about (around) M-E.”

This was fun enough, though I’m not quite as sold on it stylistically. There are just the 12 theme squares in the middle plus GREEN DAY, which seems a bit thin. And did I backsolve this? I guess GREEN DAY was supposed to be a legit hint and not an Easter Egg, and maybe other solvers noticed the central cluster without it. So all those great long entries weren’t theme, just noise to hide the central dozen squares! Odd, but points for originality since I don’t like when solvers say a meta should-have-this-but-can’t-have-that, so I won’t dock points for the very small amount of theme material.

4.30 stars. I’m back on track after barely missing last month.