A nice, smooth, Monday puzzle without a revealer (unless I missed it, in which case I’m sure someone will enlighten me). All the theme answers start with the sound O B. 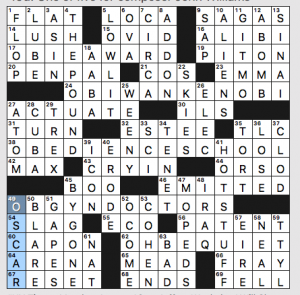 A fun, consistent, accessible theme. Perfect for a Monday.

What I didn’t know before I did this puzzle: that John Williams has five OSCARs. Here’s why: 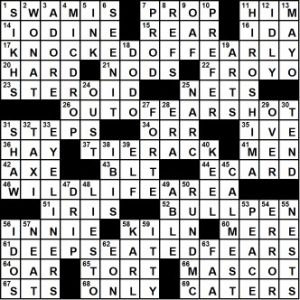 So, now we look for FEARs–entrenched, hidden, and deep-seated–and find:

Other stuff of note:

Not bad. Perfectly adequate. Accessible. Little to :object to. 3.7 stars./ 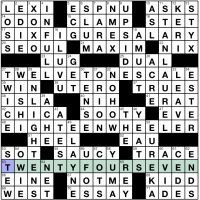 17A: SIX FIGURE SALARY [Half a million in annual pay, say] – More like the 1%, am I right?
27A: TWELVE TONE SCALE [Chromatic basis of much modern music] – New to me!
48A: EIGHTEEN WHEELER [Big rig] – Thank you for bringing packages to all of us lazy online shoppers!
63A: TWENTY-FOUR SEVEN [Around the clock]

No need for a revealer with the consistent pattern of 6, 12, 18, 24. I largely liked this theme for a Monday except for the slight inelegance of the last revealer having another number included in it. Maybe twenty-four hours would have been a slightly tighter entry? Regardless, a quick and clean solve for me, which I appreciated.

Other random thoughts:
– Relatively a lot of women in the grid today! LEXI Thompson (with context so we can learn more about her!), CHICA, EVE, EDIE Falco, KERI Russell, and ELAYNE Boosler. Amazingly, that’s equal to or more than the number of men referenced in the grid/clues. So many bonus points!!
– So many X, V, and Y in this grid – made it feel a bit more fun and Scrabbly. I also enjoyed the DUAL / TWICE pairing.

At first I thought the byline belonged to Gary Larson, whose puzzles we’ve seen quite frequently in the WSJ. But this appears to be a debut for Carl. I wonder if there’s any relation there. Congrats! 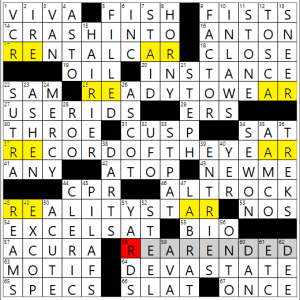 Not bad, but the REAR in three of the four entries can be parsed in multiple ways due to extra A’s and E’s in the phrases. For example, in READY-TO-WEAR, you can get REAR from RE/AR as depicted above as well as R/EAR and REA/R. It still satisfies the theme constraint, but it’s a slight inelegance. Only RENTAL CAR lacks this ambiguity.

The rest of the grid is workmanlike and solid without much flash. CRASH INTO seems like it’s theme-adjacent, but is not clued that way [Collide with]. Its counterpart is DEVASTATE which is not usually a word associated with being REAR-ENDED.

A solid debut, however. Not much flash, and the theme has some ambiguities in it, but it works technically. 3.25 stars.

This one felt more difficult than the last few Monday New Yorkers, although I forgot to turn the timer on so I don’t know for sure. When I get stuck-ish in the NW corner, puzzles always seem harder to me.

The stuck-ness was in part due to my mistake – I thought the [Airer of N.B.A. games] at 22a was TBS and it’s actually TNT (yes, Adé, sports will make you smarter). I finally figured that out and also realized that 1a, [Large quantity], did not end in S (it’s SLEW) and then the whole corner fell to complete the puzzle. 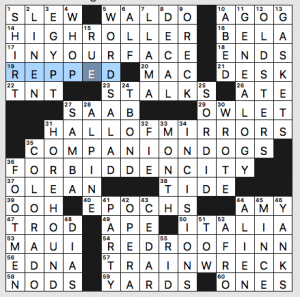 What I didn’t know before I did this puzzle: that the ship in the movie ALIEN is called Nostromo, and that Adidas makes a shoe called the SAMBA. 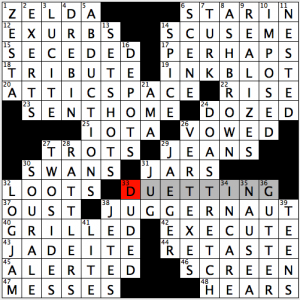 Apologies for my absenteeism lately! I was in Las Vegas this past weekend for Trivia Nationals, which was a lot of fun but which didn’t leave a lot of time for crosswording.

This is a really nice 60-word grid, which is something you don’t hear very often.  is an obvious pangram. The puzzle has been jam-packed with Scrabbly letters (two Zs, a V, and tons of Xs and Js). Liked seeing JUGGERNAUT, LOG JAM, and SOUR ALE.

Favorite clue was [Ufologist’s subjects] for ABDUCTIONS — I really like the way the word “ufologist” looks.

Fun fact of the day: The Mechanical TURK [18th century hoax that was a chess-playing “machine”]. Truly a wild story. Amazon’s site for crowdsourcing business tasks is named for The Mechanical Turk.