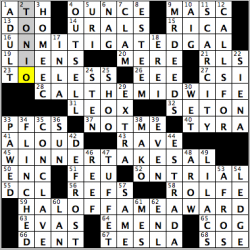 Hello there, everyone! Hope all is well with you and that you enjoyed today’s grid, which was more fun with puns! Each of the four themes contains a word that, normally, features a double L. For the purposes of executing the theme, one of those Ls is removed in each, creating the puns that are clued very creatively.

Spent all of last week on Montréal covering a tennis tournament, so it was nice to see a little French strewn in the grid to keep me in the French-speaking mode that I was in, even if it goes down as crosswordese at the end of the day, including MES (61D: [“Au revoir, ___ amis”]) and FEU (51A: [Pot-au-___ (French stew)]). Seeing TYRA did make me think of the time when my father, who  regularly cut out all the pictures of all the models every time the Sports Illustrated Swimsuit Edition came into our apartment when I subscribed to the magazine as a pre-teen, conveniently forgot to cut out the cover page the one year that Ms. Banks first appeared on the cover (40A: [Talk show host Banks]). Always found that curious, but definitely was too afraid to ask his motives for leaving that specific page still attached to the magazine.

No real stand out entries outside of the themes, though I wished TUFFET would have been “Muffet” for the fact that I would have been able to talk about Hall of Fame head basketball coach Muffet McGraw, who has build a dynasty at Notre Dame while winning a couple of national championships in South Bend (47D: [Rhyming seat for Little Miss Muffet]). Oh well!

“Sports will make you smarter” moment of the day: ATH. (1A: [Sports fig.] – Kind of a boring SWMYS entry for today, so please bear with me! In the last 10-15 years, so many prospective college football players come out of high school playing multiple positions that many schools (high school and college) and recruiting services have created a specific designation for such players: ATH, for athlete. Normally, these individuals play “skill positions” on both sides of the ball, meaning that they play either quarterback, running back or wide receiver on offense and cornerback or safety of defense. (Lots of times, these players will also be punt and/or kick returners on special teams.) Soooooooo….if in the event you see a clue in a crossword puzzle along the lines of “Amorphous designation used to identify a football player’s position on a roster (abbr.),” don’t say that I didn’t warn you!! 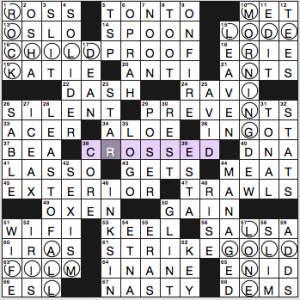 The queen of Monday puzzles treats us to a Tuesday crossword. The theme is 23d. [With 38-Across, like Romeo and Juliet … and like the circled words?], STAR / CROSSED. The circled words can all precede star, and they cross in pairs:

I’ve always loved that “star-crossed lovers” phrasing, and the theme offers a fresh riff on it. Or maybe not fresh, but I don’t happen to remember any prior versions of this theme. 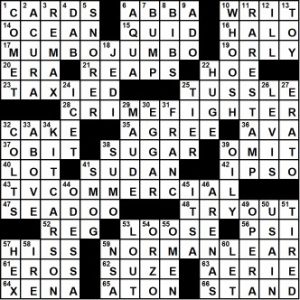 Other stuff to consider:

Okay, not much. But the rest of the fill all seemed fine.

Today’s grid, entitled “Rock of Ages,” is a tribute puzzle for the 50th anniversary of WOODSTOCK. Let’s see what we have inside: 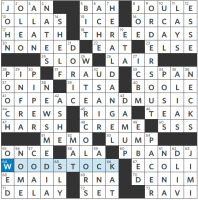 As far as tribute puzzles goes, this one works well, especially since we won’t be getting a 50th anniversary concert anymore! I like how the tag line and event name could be made to be symmetrical in the puzzle and it’s impressive to fit six musicians in the grid, but their super short names makes that accomplishment a tad less impressive. I appreciate that the list of musicians includes people of color and a woman, so bonus points for this list not just being a bunch of white dudes.

Other random thoughts:
– The NW corner was tough for me to crack. I wasn’t familiar with JOHN Sebastian, OLLAS, HEATH in that usage, or OLEO with the ? clue.
– I appreciated FRAUD and CSPAN being right next to each other.
– I had ATTA [“___ girl!”] for 39A until I begrudgingly changed it to ITSA. “Gender” reveal parties are super weird, right? You’re gathering everyone together to announce the genitals of someone who hasn’t even been born yet, even though know one knows what that person’s gender identity will ultimately end up being. Also, these reveals are getting more ridiculous and, at times, dangerous. One of California’s worst wild fires recently was caused by a park ranger’s botched gender reveal party!
– I almost had a Natick at ICBM / BOOLE. That’s a HARSH crossing for a Tuesday.
– I really liked the [Genes material] / [Jeans material] double toward the bottom of the grid.
– I also loved seeing gay legend ALAN Turing right next to NATES. : )
– Even more to appreciate? A number of women and people of color included in the grid, like KAT Dennings and the NATES referenced at 4D. 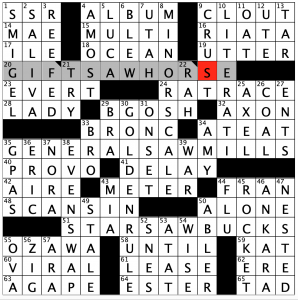 Sometimes the theme doesn’t have to be complicated to be fun!

Fun! Just insert the word SAW into some common phrases, and hilarity can ensue! Only three themers, but Matt is closing in on a 1000 puzzles in this series, and I am amazed he comes up with themes every week for 20 years, so no judgment here! 4.2 stars for this one.

That is all for this week’s Jonesin! Puzzle 950 is next week, so I’ll bet we can expect something interesting. 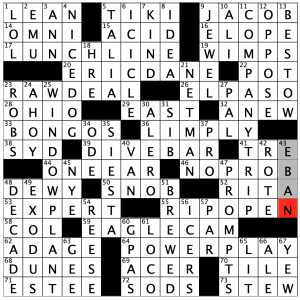 This theme is fairly common, and may have been done in a slightly different fashion before (I have said it before, but I think there is a database somewhere that tracks these types of themes), but this was still fun. Here are the theme answers: