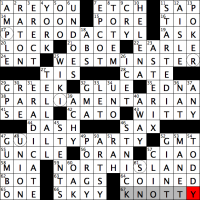 hello and welcome to episode #584 of matt gaffney’s weekly crossword contest, “Dude, Where’s My Car?”. this week, matt challenges us to name a model of automobile. what are the theme answers?

as that second clue implies, this meta only works (sorta?) if you pronounce WESTMINSTER with a british accent. why is that? it must be related to pronunciation, rather than semantic or orthographical considerations. once you start thinking about these theme answers phonetically, the silent P in PTERODACTYL pretty well screams out to be noticed. the others, too, contain a silent letter: the first I of PARLIAMENTARIAN, the U of GUILTY, and the S of ISLAND.

what about westminster? comparing the british and american pronunciations here, i noticed three differences:

on my puzzle i circled the first T, but when i was looking at PTIUS, i got the message. the answer to the meta is PRIUS, which is indeed matt’s car, as per the title (assuming he still has the one he bought nine years ago). i think it’s a fairly apt mechanism given the answer, as hybrid cars are known for their quiet (if not exactly silent) engines in electric mode.

let’s talk about WESTMINSTER for a moment, though, because i regard it as an inelegance, if not an outright flaw in the meta. it’s clunky enough that the key letter is only silent in one particular pronunciation, which is not the standard pronunciation in areas (such as here in north america) where rhotic english predominates. then the extraneous silent T is an extra-unfortunate distractor.

all this having been said, if you have an R in your answer, there is not much you can do about it. rhotic speakers pretty much just pronounce all their R’s. the few exceptions are unsuitable for use in this meta for other reasons: forecastle has too many other silent letters, and february also has an R that some people pronounce and others don’t, only this time it doesn’t divide neatly into speakers of british and american english. (one thing i enjoyed learning from this tongue-in-cheek piece is that the puzzle perhaps wouldn’t be possible at all if the meta contained a V.)

so allowances can be made, but i do think that matt should have chosen a theme answer that didn’t have a distracting perhaps-silent letter like the first T of WESTMINSTER.

that’s all for me. see many of you this weekend at lollapuzzoola!