I didn’t recognize the byline, but this isn’t a debut. The last WSJ grid Will had was a puzzle two years ago which featured a fun Blue’s Clues theme. This one is just as fun. He’s taken slang words that mean “cool” to different demographic groups and found phrases that use those words in a non-“cool” way. Then he clues said phrases with their funner “cool” meanings, and we’re off to the races. 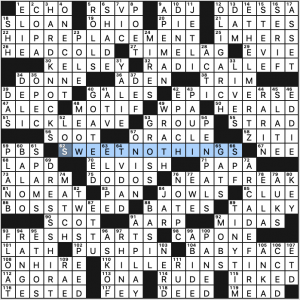 To be sure, there’s some overlap between these groups, like skateboarders, surfers, and Gen Xers, as well as the ’60s bohemian and the beatnik. But I didn’t worry about those distinctions and just went along for the ride. All of the base phrases are solid and lively, and they’re made more fun by the thematic conversion. Well done.

With all the positive vibes coming off the theme and long fill, there was very little that IRKED. What did you think of 25a I’M HERS [Devoted spouse’s words]? It sounds a little far-fetched as an in-the-language phrase, and I’m sure I’M HIS wouldn’t go over well. I wonder if that section could have been re-worked to make this I’M HERE.

I feel like there was a definite attempt in the grid to reference both older and newer pop culture. In the older camp there is ETHEL MERTZ, Paul ANKA, Andy Taylor and Ben Cartwright. In the newer camp, there’s BABYFACE, ARCADE FIRE, and Wicked, for example. I think the grid still skews slightly older, but I applaud the effort to include fresher fill. 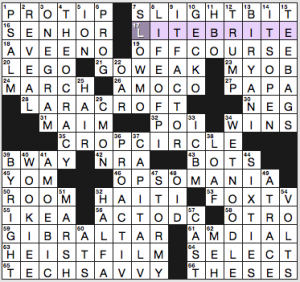 Y’all, I am tired. The puzzle took me a good bit longer than the typical Saturday NYT. Is it me being ready for an early bedtime, or the puzzle being harder than usual? Twitter suggests it’s some of both, depending on who you ask.

Fave fill: PRO TIP, my beloved LITE-BRITE (I was sorely tempted to buy one earlier this year! It comes in a flat-screen format now, you know. I could use it for household notes: “Take out trash” in colorful illuminated letters.), my beloved AVEENO (nice fragrance-free lotion) and the acne treatment PROACTIV, knees that GO WEAK, CROP CIRCLE (great clue: [Unbelievable discovery in one’s field]), HEIST FILM, TECH-SAVVY, LIFE OF PI, and tasty BIRYANI.

Did not know, because it’s wildly obscure: 46a. [Intense craving for a particular food], OPSOMANIA. This isn’t a cool word you’ll be using, since no one will know what you’re getting at.

Did not like: AC TO DC, ONE GRAM, plural ATS, A TRACE including that indefinite article when SLIGHT BIT goes without, CAPITAL V. I’m also not sure that the Fox Broadcasting Company has any entity called FOX TV, 53a be damned. Do any of the networks actually use those “___ TV” formulations we see a lot in crosswords? Local affiliates to, probably to distinguish the TV stations from the radio stations with the same call letters. But networks?

First of all, big thanks to Judge Vic and Jim Paredo for carrying the Universal write-ups all summer while I was off gallivanting! I think it’s been a solid six weeks or so since I even opened a crossword. But this one gave me very little pause- a clean offering from Mike Buckley with an easy-to-grock theme.

THEME: Singers who have a bird in their name. 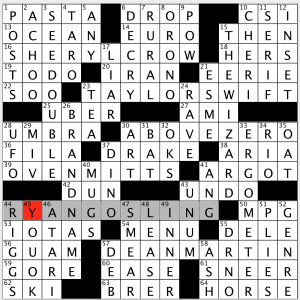 Although it doesn’t quite “fit in” with the others, my favorite themer was DRAKE– especially being dead center. I found the brevity of the answer somewhat funny. SHERYL CROW, TAYLOR SWIFT, DEAN MARTIN, RYAN GOSLING… and then just DRAKE. Haha!

I guess the elephant in the room would be calling RYAN GOSLING a singer. I mean, c’mon. He’s known as an actor. An actor who had to sing in a film. Is MERYL STREEP a singer? She’s done it in a number of films.

That being said, the title doesn’t wholly suggest that the theme entries need be musicians. But it certainly feels that way, doesn’t it?

At 78 words, there are still plenty of longer entries to keep the fill lively. SEE DOUBLE, BRAND NAME, THE WIZARD, ERGOMETER in the downs. The longer across ones run the risk of being confused with theme answers, but OVEN MITTS and ABOVE ZERO were fun to uncover.

Nice to be back with a solid puzzle! 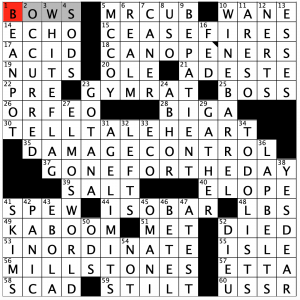 This one has a nice stack in the middle of three 13-letter entries, and tons of longer entries throughout the puzzle. I use CrossFire on my MacBook to examine and construct grids, and it says this puzzle has an average word length of 5.79. I don’t often notice that stat, but that seems on the higher side, but this is only a 66-word count grid, and there are relatively few 3-letter entries found here. Very nicely done! Not too hard; I got through it in under 6 minutes, but still a fun puzzle. 4.4 stars today.

A few highlights, including all three of those 13-letter entries: 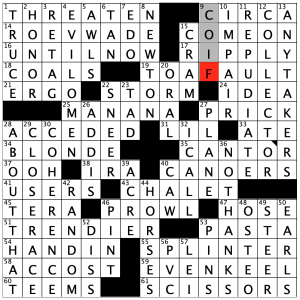 The byline for this puzzle says “Sutphin & Agard”, which I can only assume is Bruce Sutphin and Erik Agard. This one was a doozy. Well over 30 minutes for my solve. I stared at a mostly empty grid for about 10 minutes. The lower left fell first, then the lower right; getting 14A (see below) broke open the NW corner, and I fought the NE to the bitter end. I did use the check answer feature in Across Lite for this one, and unbelievably, there is only one incorrect mark! Even with a slow time, I will consider that a win! This was the toughest Stumper I have done in weeks, and some of the clues I still don’t understand, but I don’t seem to be getting frustrated when they are this hard anymore, so that is also a win! 4.7 stars for a great, REALLY tough puzzle! You two can get busy on the next collaboration!

I could go on, because there are tons of great clues in here. Have a great weekend!