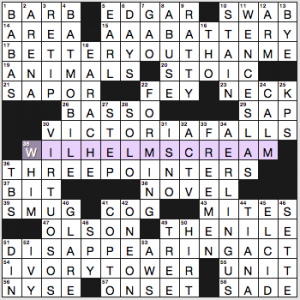 Solid 68-worder with staggered 13s in the middle and a couple 15s for good measure. 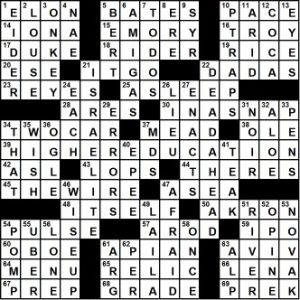 Very nice! Is this a debut? (I used to research that kind of thing, didn’t I?) 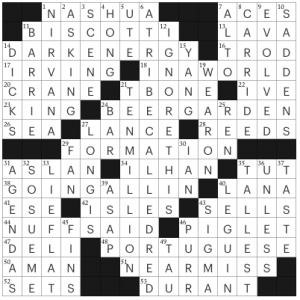 Another excellent puzzle from Mr. Agard, whose twin hallmarks are modern and inclusive fill along with frightfully clever clues. Two ordinary English words are rendered more entertaining via clues. For example, 2d ASKING is clued [“__ for a friend”], the thing people used to say when they were trying to hide that they were really asking something embarrassing for themselves, and which people now use on social media to signal winkingly that they’re absolutely referring to themselves. For example, “Does anyone know how to get mustard stains out of silk lingerie? Asking for a friend.” And then there’s boring ol’ FORMATION, livened up with the lyric [“O.K., ladies, now let’s get in __”: Beyoncé].

Favorite fill: BISCOTTI, which means “twice cooked,” just like biscuit and Zwieback. “IN A WORLD …” from far too many movie trailers. BEER GARDEN crossing BAR, with parallel clues. GOING ALL IN, ‘NUFF SAID, Milne’s PIGLET, and Ursula K. LE GUIN.

Clues that stood out:

For this crossword, we need to mind our P’s and….well, just our P’s. Each theme answer has a P appended to the front of a phrase. Wackiness results. 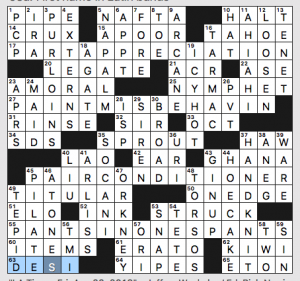 [NASCAR drivers are entertained during a race]: pits all in good fun.

What I didn’t know before I did this puzzle: that PILATE said “Ecce homo.”