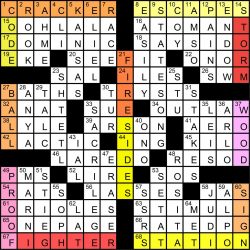 Good day everyone! I hope all is great with you all as we turn the corner towards the end of summer in 2019.

Today’s puzzle is, as the kids say, straight fire! I mean it! Each of the entries on the perimeter of the grid all is a word that can also come after the word “fire.” To complete the theme, the entry that’s smack dab in the middle, FIRE SIDES, acts as the reveal (21D: [Toasty chat sites…or a hint to the puzzle theme]). Let’s take a tour around this crossword ring of fire, shall we? Oh, and I dare you not to have Johnny Cash playing on loop in your head right now!

Embarrassing moment of the day came when I put in “Adam Ant” instead of ATOM ANT, even though I had the character in my head as I was solving it (16A: [Hanna-Barbera superhero with antennae]). Clearly, I also had “Goody Two Shoes” in my mind as well! Honestly, ’80s music just creeps in my mind, even when I don’t want it to! It was not hard to have music and music lyrics in the brain when solving this, given the presence of STATE SONG (9D: [“Georgia on My Mind,” in Georgia]), KANSAS (5D: [“Dust in the Wind” band]) and SOS, which made me think of The Police’s “Sending out an SOS” (53A: [Captain’s “Help!”]). ATOM ANT was just one of the many longish fill in the grid that was very pleasing in each of the corners, definitely something to make one say OOH LA LA after solving (15A: [Très chic]). As I’m writing this blog, I’m sitting in the US Open media room underneath Arthur Ashe Stadium, and, like past years, there is a pretty good chance I’ll be hearing JAS a number of times from the horde of German press that sits adjacent to my seating area (58A: [German “yesses”]). Das ist gut!

“Sports will make you smarter” moment of the day: LYLE (38A: [Baseball’s “Sparky”]) – There are some who might have thought that this clue had to be talking about Sparky Anderson, the former World Series-winning manager of the Cincinnati Reds and Detroit Tigers. But this “Sparky” is about the man who was the first reliever to ever win the Cy Young Award in the American League. One of the premier relief pitchers of his time, Albert Walter Lyle, a.k.a. Sparky Lyle, was best known for his time with the New York Yankees, going to three All-Star Games during his time in the Bronx between 1972 and 1978. In 1977, Lyle won 13 games (13-5 record) and saved 26 games as he was voted the Cy young Award winner in the Junior Circuit (slang term for the American League). Lyle finished his 16-year career with 99 career wins and 238 career saves, the latter statistic setting the American League all-time record at the time of his retirement.

Let’s see if we have any two-body problems in today’s puzzle, “Binary System.” 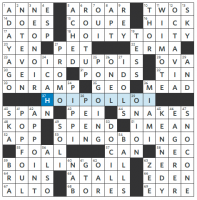 As the title hints, our theme entries each feature zeroes and ones, which are represented alphabetically as Os and Is. All is well and good, until we get to AVOIRDUPOIS, which has a theme-breaking A and U! I’m willing to concede the Y in HOITY TOITY as not-a-vowel in that themer, but how did this themer with an A and U get past any stages of checking or editing this puzzle? Also, I’d never heard of this [Weight system], which Wikipedia tells me is, “a measurement system of weights which uses pounds and ounces as units.” Huh! Even though we commonly use this system in the US, is this a commonly used term for it today? I’ll defer to the readers on that one. That huge asterisk aside, I liked the idea of this theme, especially with inclusions like OINGO BOINGO. The other themers felt fun, except for BOILING OIL, which felt less inspired.

:) :) :) This might be the most woman-positive and woman-centric puzzle I’ve ever reviewed for the WSJ! We have ANNE Hathaway of “Ocean’s 8,” DOES, ERMA Bombeck, Margaret MEAD who wrote “Coming of Age in Samoa,” Medusa, Jane EYRE, Daisy Ridley as REY in “Star Wars,” OCTAVIA Spencer representing with her Oscar(!), the WNBA SKY, TESS Hardy, and PIPPI Longstocking of the Astrid Lindgren books. Bonus points for so many of the women being clued for their accomplishments and not their relationships to men. Extra bonus points for BRA being clued matter-of-factly / not creepily! Compare this list to the relatively few men in the puzzle (Jefferson, PEI, monsieur, Asgardian THOR, Carl ICAHN, Kennedy) and you get the extremely rare woman-centered puzzle. Now, if this feels like “too many women” to you, consider that this women:men ratio is almost always exactly flipped in puzzles these days. Most days do indeed feature “too many men.” 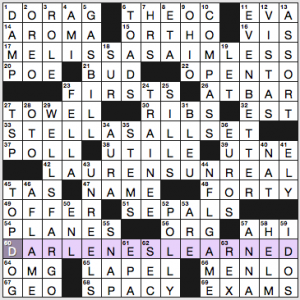 The theme involves anagrams of famous living people’s first names, and they’re all notable women in the arts:

Poor Melissa McCarthy. Everyone else gets a positive attribute! The theme is well placed on a Tuesday, and I like the starring role given to actual living women.

The fill is mostly smooth, though OTO, Ron ELY, and ENL clued as [Supersize: Abbr.] feel too tough for a Tuesday. Who says “This print of the photo is supersize!” to refer to an enlargement? I tried XXL first.

It’s the judge’s turn! I’m curious as to whether or not this theme was inspired by an actual case. I mean, judges’ minds must wander during a particularly boring proceeding just like anyone else, right? I imagine a legal pad full of theme ideas that accompanies Vic to the bench. 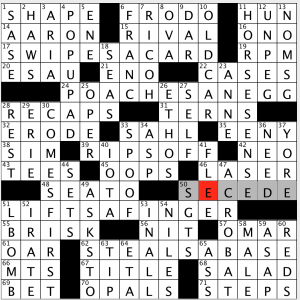 Love the consistency in this simple, but solid set. All have to do with “stealing” and all follow the ______S A(N)  _______. They are all clued consistently also. I don’t know if there’s any real benefit to the bonus answer RIPS OFF. I think the four themers stand alone just fine without any revealer or alternative title. But I guess it does no harm.

Certainly some crosswordy regulars making appearances (looking at you northwest!), but nothing groan worthy. 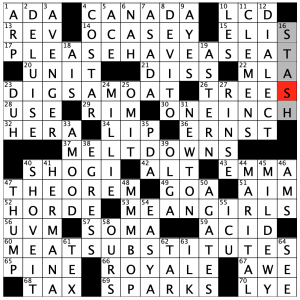 The theme wasn’t easy to see while solving, but after a closer look it made perfect sense. I will highlight the affected letters in the theme list:

So in our “MEAT” substitute puzzle, the letters in MEAT are used in four themers, each one having one letter switched, and in order to boot! It would have been cool if the letters that act as subs spelled something, but that is an impossible ask, I would think. Surely nothing that would be relevant. This still is a fine construction feat, since they are all in order. Neatly done, Matt! 4.3 stars today.

There is another Jonesin’ coming next week! Until then! 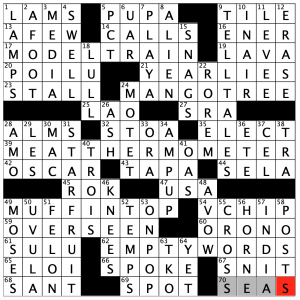 Not too complicated a theme, but it IS Tuesday! Revealer is at 62A:

I told you it wasn’t too complicated. I saw the MT initials early on, so then you could safely assume the revealer would be along those lines. I didn’t have an exact revealer in mind, but I saw the word EMPTY early on, and it played into what was going on. Nice puzzle! 4.3 stars from me.