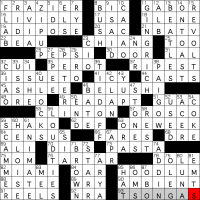 hello and welcome to episode #586 of matt gaffney’s weekly crossword contest, “Periods of Reconciliation”. this week, matt challenges us to name a ’90s political rival of 55-Across. okay, well, 55a is {42nd President of the United States, one of whose rivals herein is the meta answer} bill CLINTON. who are the rivals?

okay, so the meta answer is one of these rivals. how are we to determine which one? i haven’t figured out the meta yet, so i don’t know, but there are four other rivalries in the grid:

so i still don’t know how the meta works, but here are a few observations.

first, these are very wordy clues, including some apparently unnecessary details (like vanguard 1, what even is that?). without meta considerations, these could easily have just been clued as {Athletic rival of 69-Across}, {Athletic rival of 1-Across}, etc.

second, the puzzle title. i can’t make head or tail of “reconciliation”, but “periods” has me thinking about eras. the fact that the instructions explicitly include “’90s” is making me think decades are particularly relevant. for what it’s worth, the four extra rivalries, including all of the specifically pinning details in the clues, occurred in four different decades: the space race was the 1950s (vanguard 1 was 1958, laika 1957); beatles-stones was the 1960s (sgt pepper and magical mystery tour both 1967, beggar’s banquet 1968, let it bleed 1969); ali-frazier was 1970s (fight of the century 1971, super fight ii 1974, thrilla in manilla 1975); and the cola wars in the 1980s (jackson ad 1984, richie ad 1985, new coke 1985). and then of course the 1990s are the decade of clinton’s political rivalry with … whoever.

okay, so how does the rest of this work? it feels like reconciliation has to be a hint to something, but i don’t know what. i am willing to believe that the extra details in the clues are there solely to pin the rivalry to a specific decade, but then i think we’re supposed to do something that connects the decade to the names of the rivals. but i can’t see how to do it, and i’m out of time, so i’m just going to send in a guess. somebody let me know in the comments how it works.