I love Zhouqin’s puzzles. She makes Mondays fun. I thought I figured out this theme at the second answer I filled in. I was wrong. 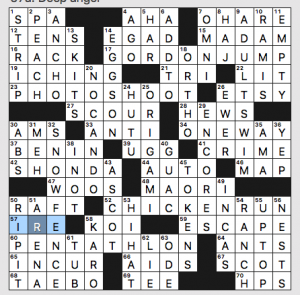 And the revealer: 60a [Summer Olympics contest whose participants do the ends of the answers to the starred clues]: PENTATHLON.

Six theme answers in a standard-sized Monday puzzle and it works beautifully. All the themers are solid, it was a lovely “aha” moment for a Monday, and the fill is smooth. Did I mention I love Zhouqin’s puzzles?

What I didn’t know before I did this puzzle: that Harold RAMIS directed “Caddyshack.”

Quite the timely puzzle for today’s holiday! 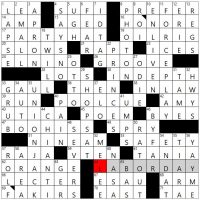 We have a series of theme entries that can follow the word labor: labor force, labor party, labor union, and labor pool. It’s a consistent puzzle in that the word LABOR never loses its same meaning throughout any of the uses, which I prefer to the meaning sometimes changing but sometimes not. Points for consistency and for presenting a largely complete set of labor ___ phrases in the themers.

That said, this felt a bit challenging for a Monday puzzle, especially with fill like LEA, SUFI, HONORE (crossed with ROI), TANIA, FAKIRS, and ROLF. If you look at my grid, I technically didn’t finish this puzzle because I got stuck at the ROLF/FAKIRS cross and had no clue. I almost got stuck at GER/FAKIRS as well, but made an educated guess with GER. There was a lot of fill I did like though, including PARTY HAT, BOO HISS, and YAY ME – those bits of personality kept me engaged in the puzzle. I did note a slight inelegance / dupe with [Online shopping mecca] at 2D and SHOPS AT at 29D, but it was made up for by fun connections between LECTER and CHIANTI, for example.

We have AMY Poehler and Patty (TANIA) Hearst representing as the only women in the puzzle – hopefully a future puzzle will give those women a bit more company!

This is my first review for Team Fiend! I have to say, when I signed on to take over the New Yorker reviews, I was both thrilled and a little terrified. This puzzle reminded immediately of why: it’s so clean and well-constructed, and it immediately forced me to reckon with my own literary/”high culture” shortcomings. These New Yorker themelesses are almost always beautiful and cleverly clued while also packed full of authors and artists and occasional umlauts, just like the magazine, and this puzzle was no exception!

(Although actually, there were no umlauts this time. I plan on keeping a running umlaut count in the future because New Yorker umlauts crack me up.) 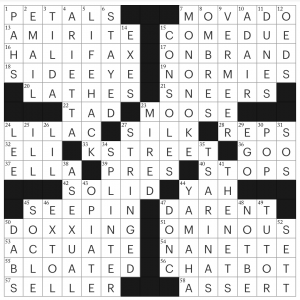 One quick note on grid design: Those very tall T’s at the center N/S make the grid feel super segmented, so it played a little like 4 Midi puzzles plus the middle, but I actually don’t mind that. Holding it all together with the hard-to-parse (while solving) KSTREET is also great– I had completely forgotten the setting for “Thank You For Smoking,” so remembering it to unlock the center of this puzzle was fun!

Overall, really excellent puzzle! Fresh and packed with a perfect blend of new and old.

GAS STATION SUSHI! That’s a great marquee entry. There’s a gas station near me that gets it right, but I still need someone else to buy it and tell me it’s from somewhere proper. 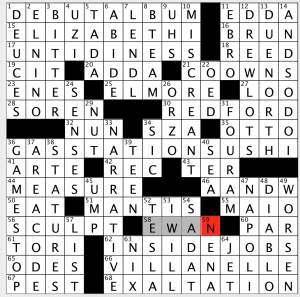 This has the marks of a BEQ themeless: quirky entries, clever clues, and lots of proper nouns, many of which I have never heard of. That last part is starting to eat at me when I open up a BEQ Monday. There are a couple of spots where one may be Naticked here. For me it was the was the EWAN/SADAT/NENA area. It definitely didn’t help that I spelled SADAT wrong (confidently SEDAT). When I fixed the error, I was able to guess the N correctly. And luckily, being a big fan of “Killing Eve,” I knew VILLANELLE with no help… but I’m doubting that answer is inferable for those unfamiliar with the series. With proper nouns abound in that area, perhaps a poetry clue would’ve been easier. Other names I struggled with were SZA (wanted SIA), ENES, SOREN, ELMORE, and LENDL. I’m rather surprised that OTTO and TORI were not clued as a proper nouns (in both those cases, it may have helped me a tad)!

Not my favorite BEQ, but enough to keep me wanting to hack away at the grid.

Next time somebody texts you the message “Where R U?” I dare you to respond “THE MILKY WAY.” That’d be great.

THEME: YOU are here! 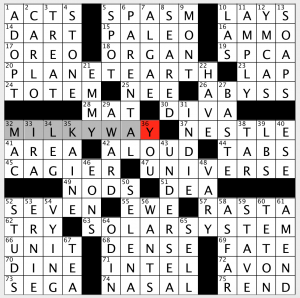 Hopefully ABYSS doesn’t apply to your whereabouts, or UNDERSEA for that matter (unless you’re safely aboard a submarine).

It looks to me as if this is a debut from Sean, so congratulations! And welcome! This was a lighthearted, fun puzzle to introduce yourself. The word count is surprisingly high at 80, which seems odd given that two of the themers are only 8 letters. I’m curious to know if other grids were attempted with PLANET EARTH and SOLAR SYSTEM in rows 3 and 13. With 80 words, the fill tends to be shorter with fewer opportunities for dazzling fill. There are only a handful of entries that exceed 5 letters here, so nothing really new to uncover.

I grinned at 73A [Nintendo rival] SEGA. That exact clue was used in a NYT recently and it angered some people for its dated nature (“Is this 1997??… one tweet started before ranting on a bit too passionately).

Fun puzzle with a cute theme. Just surprised that the standard 78 word limit was exceeded for a theme that doesn’t seem to require it, though I guess getting YOU dead center using both MILKY WAY and UNIVERSE added restraint.