Constant WaPo solvers may remember a relatively recent “house themed” puzzle back in April this year and another in January (both very clever and memorable). Before you start wondering if Evan’s true calling was residential architecture rather than crossword construction, it’s worth noting that this week’s Washington Post Magazine is an issue that’s dedicated to the divisive nature of CONGRESS. And also… it’s still a damn clever puzzle. That being said, if you ever want to know about different types of houses, I’m sure Evan has researched them all. Send him an e-mail.

THEME: Types of houses are literally “divided,” and the letters that divide them spell out the revealer. 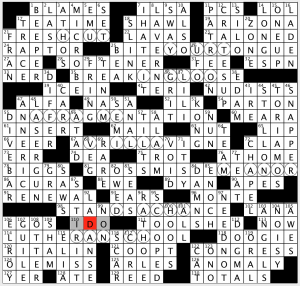 Birnholizian for sure. Which i 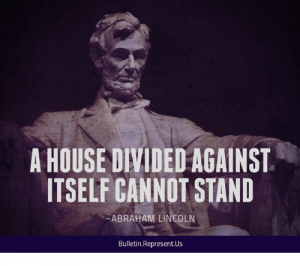 s to say it’s brilliant. The WaPo, in my opinion, is the most clever and enjoyable Sunday-sized puzzle out there. It’s easy to say this is a “typical” WaPo puzzle… because it is. As a constant solver, I fully expect a multi-layered accessible puzzle with clean, interesting fill that is freshly clued. It’s typical WaPo. I hope solvers can appreciate that it’s not typical anywhere else though.

I think a lot of publishers would be happy enough with the theme “A House Divided” without the extra layer of burying the word CONGRESS in the divisions themselves. That extra layer and constraint which Evan puts on himself is what makes the WaPo unique. It’s a lot to ask: Find common phrases that include types of houses that are separated by specific letters. I can’t imagine the amount of time that must be spent on Onelook.com in order to come up with symmetrically passable answers. Yet he makes it look easy. LUTHERAN SCHOOL may be a bit “green-paint”ish, and DNA FRAGMENTATION is not something I discuss on a regular basis, but even those were a joy to uncover with some inferencing. In fact, guessing DNA FRAGMENTATION with ???FR?G?M??TA?ION allowed me to pat myself on the back. And who doesn’t like those moments?

SOME WINNING CLUES TO BOOT: 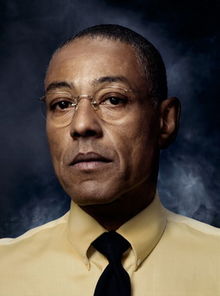 “Spell my name correctly… or else.”

And if you ever want to question your sanity, please listen to all nine minutes of this, as I did while typing up the theme clues: 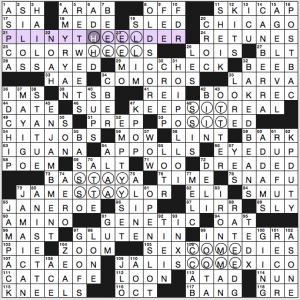 The theme elements display differently depending on the solving format. The web version has shaded squares; the .puz version depicted here has circled squares; and the newspaper version has conjoined squares forming rectangles. Basically, fill those spaces with tall letters, and those “tall” spaces spell out commands (“orders”) you might give to a dog: HEEL, SIT, STAY, COME. The long Across answers (otherwise unrelated) share those letter sequences, so their Down crossings just need one tall letter rather than the doubled letters seen in my grid.

So it sort of plays like an oversized Thursday gimmick, with 30 thematic squares dropped in a big ol’ 21×21 grid. What do we have to make the rest of it pay off as a themeless? COLOR WHEELS, MIC CHECK, the COMOROS, an appreciated BOOK REC(ommendation), KEEPS IT REAL, HIT JOBS, sportsy A.P. POLLS, JAMES TAYLOR, SEX COMEDIES, JALISCO MEXICO, a CAT CAFE, K-POP, JAM-PACK, AMY RYAN, an OLD SCORE to settle, IRON MAN, and BAKED BEANS. Not sure that these are enough to offset the smallness of the theme. (And yes, I know a theme with six themers of 11 to 13 letters isn’t all that slight, but when it’s the short crossers that actually need thinking in the .puz format, it ends up feeling slim.)

Did not know: 16d. [Program starting with the fifth year of college, informally], POSTBAC. Short for postbaccalaureate, and on Twitter Finn cited the example of a college grad taking a year for science prereqs needed to apply to med school. I’ve heard of postdocs, but never this term. Also unknown: 100d. [Cleaning for military inspection], GIING. Also also unknown: 97a. [Protein in Wheaties], GLUTENIN.

Took me a solid minute or two of staring at the finished grid before I saw the theme, which (appropriately) ate at me.

THEME: Synonyms for “bother” (as a verb) start common phrases. 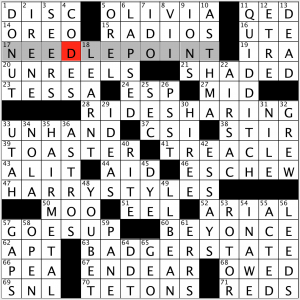 I doubt the connection between the theme answers would be solid without the title, which is why I often like titled crosswords. But I still would’ve appreciated a revealer like NAG or something in that southeast corner. Yes, NEEDLE, RIDE, HARRY, and BADGER are all perfect synonyms of “bother,” but since most of those parts of the answers have other, more common definitions, it was hard for me to see the relationship between them. Of course, looking at it now in retrospect it’s completely obvious.

For some reason I just assumed the clue was asking for XII when it asked for a sundial opposite at 8D. Turns out OLIXIA is not a common name. Found my error when Mr. Happy Pencil didn’t greet me at the end.

This is not my favorite kind of theme. There’s no wordplay, and the theme answers aren’t particularly entertaining. They all have one thing in common. 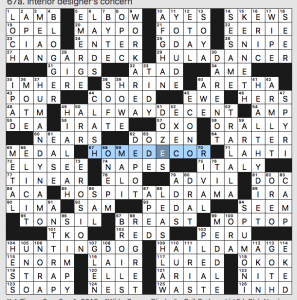 Figured it out? If not, check out 126a: [How most TV shows air, and a hint to nine puzzle answers], IN HD. It’s a solid, adequate theme that I did not really enjoy solving.

What I didn’t know before I did this puzzle: that Abe Vigoda played SAL in “The Godfather.”