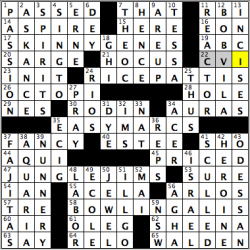 Good day everyone! It is September, the greatest month of the year! Why? Well, my birthday is nigh! Shoutout to all the Virgos out there!

Today’s puzzle is fun with puns, as common phrases are reimagined using homophones that also happen to be the first names of two celebrities with the same first name.

Outside of Sesame Street, probably the one entity that I remember more than anyone/anything while growing up and watching public television was BOB VILA, and I only wish I knew what he was talking about better back then so I can use those tidbits in my family’s new house (12D: [Original host of “This Old House”]). Sprinkling in some Hamlet with NUNNERY was a lovely touch in the grid (39D: [“Get thee to a ___” (Hamlet)]). Before I go on here, please PRAY (if in the event you are religious) for the people in the Bahamas and those in the direct path of Hurricane Dorian (27D: [Recite the rosary]). I’m sure there are a number of readers who reside in those areas, so please stay safe and let us know that you’re OK.

“Sports will make you smarter” moment of the day: SARGE (20A: [Beetle Bailey’s boss]) – One of the lesser-known, yet very talented, father-son duos to play in Major League Baseball was the combination of Gary Matthews Jr. and Gary Matthews Sr., the latter known for having the nickname SARGE during his playing days in the 1970s and 1980s. The elder Matthews was the 1973 National League Rookie of the Year while playing for the San Francisco Giants and, in 1983, won the NLCS MVP when he hit three home runs and had eight RBI in the five-game series against the Los Angeles Dodgers. Sarge finished his career with 234 homers and 978 RBI and, for a number of years, was the color commentator for Philadelphia Phillies baseball games on television. 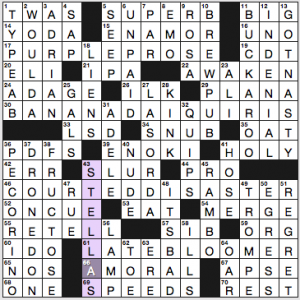 It would have been neat if all three were fall flowers like the aster, but there aren’t any phrases of ≤15 letters that end with chrysanthemum and I’m not recalling a third famously late-in-the-season bloomer. (Irises are mostly spring, though I’ve seen them on rare occasions blooming again in the fall. And roses are mostly summer, though I’ve seen them still in bloom in a Chicago December in years with weird weather.)

That PURPLE PROSE reminds me that I neglected to call out the ungood entry PROSY in the Wednesday NYT last week. It’s a legit word, but one that is rarely used. Entries in this puzzle that I’m not wild about include CDT, PLAN A, SIB, APSE (hard for a Tuesday), “IT’S BAD,” and GOT NASTY. Those last two feel a little contrived to me, not quite grid grade.

Very much wondering why this puzzle wasn’t slated for yesterday. On LABOR(ATORY) Day. OPENING DAY of baseball season would’ve worked too.

THEME: The “first few letters” (as per the revealer) of the theme answers are well known “days.”

Hmmm. I’m having some issues with this one. Gosh, I hate to be negative, so I’m going to start with the positives.

MAYOR MCCHEESE is a great grid-spanner, even if it’s dated. And I mostly enjoyed the fill. I also liked trying to determine the theme before the revealer, which I couldn’t do. That builds a fun tension for me. When I can’t figure it out, it’s exciting. “What am I missing?” I ask myself.

The payoff here feels wonky though. The revealer itself asks the solver to examine an indeterminate number of letters (five is more than “a few” in my opinion… especially when it’s 50% of the ten-letter answer). Then there’s the inconsistency of the theme days in the entries themselves. In FLAGSTAFF, you can hear the word “FLAG.” It sounds like it’s its own word. But in LABORATORY you can’t hear “LABOR.” Also, while May Day is a thing, I more closely associate “mayday” as a cry for help.

There’s a bunch of different ways this theme could be approached consistently, so I’m having trouble determining why this was the chosen way. Why not just first word of a two-word theme entry can precede DAY? I can’t help but feel that this puzzle doesn’t pass muster. Also… seriously… why wasn’t this run yesterDAY?

P.S. How is LABORATORY a [Coat room?]? I understand the lab coat reference… but it still doesn’t make complete sense. I’m not sure why one of the theme answers would aim for a far-reaching cute clue when the others are straightforward. 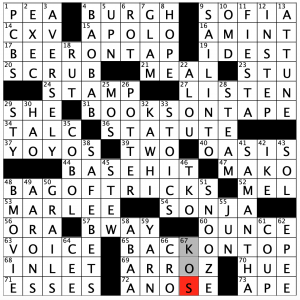 The flavortext helps to show what is going on, which I admittedly didn’t see until I was done solving! It states: “sign your initials to prove you’re not real.” What does it all mean? The themers tell the story:

It’s not too complicated: they all have the initials BOT, or what is going to take over your job in the next decade! That’s OK with me – I’ll just have to retire! Man, I am getting old. 4.2 stars this week. 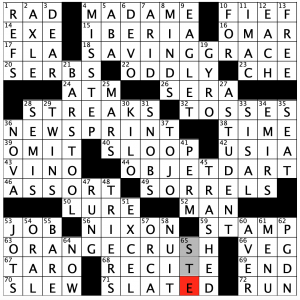 The constructor’s name was in the database, but it is a new name to me. At least I don’t recall seeing this name before. It didn’t seem to hamper the solve, as I got it done in well under four minutes. It is a Tuesday, though, so not too difficult. You might need the revealer to understand this theme:

I highlighted what the “end runs” are in the above themers: race, sprint, dart, and rush. Again, not too complicated, which is a good thing. I am tired from going to the Michigan opener on Saturday! I am too old for these activities anymore! 4.4 stars for this puzzle. Looking forward to seeing your byline more, Winston!