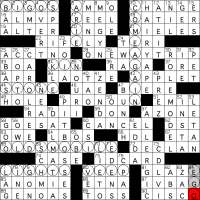 hello and welcome to episode #587 of matt gaffney’s weekly crossword contest, “Reverse Engineering”. this week, matt challenges us to name a nine-letter word. okay, what are the theme answers?

it’s far from clear, but i had a few early observations: first, this is a 17×17 grid. there aren’t many long answers (some 10s, some 9s), but they didn’t seem to have anything in common. my first hunch was that there were 9 theme answers, not necessarily long, and that we’d extract a letter from each one. actually, i guess that was my second hunch, because my first was that there would be things hidden in reverse in long answers (based on the title), and, well, there weren’t.

second, the only clue that seemed thematic to me on the first pass was {Dash dash dash, dot dash dash, dot, decoded}, an insane way to clue the common word OWE. i didn’t know what was going on there, but i figured there had to be a meta-related reason for a clue so contrived.

the last thing i found on my first pass was the most promising, because it was connected to the title: {DDE, vis-à-vis RMN} is the clue for PREZ, but i thought this had to be related to {Show for which Julia Louis-Dreyfus has won six Emmys} VEEP, and indeed it could be a clue for VEEP if you switched DDE with RMN in the clue. this seemed promising, and my next thought was that there might somehow be nine such pairs. but after looking at it for a while longer, i didn’t find any more.

coming back to it a couple days later, and talking it over with andy, we actually did find eight more. to be more precise, first andy found one more: {“What,” say} clues PRONOUN, but {“Say what?”} would be a good alternate clue for COME AGAIN, actually clued at 10d as {Clerk’s parting words}. this confirmed that i had the right mechanism to begin with, and then it was just a matter of hunting more of them down. eventually we got six of them, and i noticed that the first letters of the alternate answers, in top-to-bottom order in the grid, spelled out BACKOV. this strongly suggested the 9-letter answer BACKSOLVE, and we (fittingly) backsolved the remaining three theme answers.

everything else about this meta was terrific. really clever mechanism, fun to suss out, with lots of aha moments. there were some fill entries that made me wince a bit (a handful of unknown proper names, the uncommon spelling LAO TZE, a couple too many suffixes, adverb RIFELY that i’ve never seen used) but overall the fill was decent enough for a 17×17 puzzle with 18 (!!) theme answers. great work, matt!

after last week’s failure, i’m happy to be back on the leaderboard with a streak of 1 (one) weeks and counting. how about you?