Posted on September 8, 2019 by LauraB
Puzzle: 8:06ish, meta: some time floundering on my own, then pretty quick with a nudge

In this Fireball contest, the first since July, we’re asked: What three additional clues in this puzzle need to be asterisked to complete the theme? (To submit, send the answers to those three clues.) As a start, one clue is asterisked already: [9d: *Notable period]: ERA. Let’s see what we’ve got — notably, four themers with circled letters: 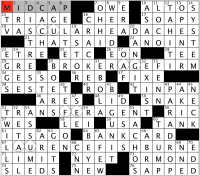 Second step: Flail. I tried all sorts of things, like noticing that ERA, the entry from the initial starred clue, is also embedded in two of the themers. Tried sussing out the periodic table for other embedded chemical symbols. Noticed [42a: ___ Alley]: TIN PAN and tried to think of alloys combining the metals. Finally had to do some other stuff, and put it aside to marinate. Talked it over with solving pal Conrad, who suggested that after finding the elements, I look again at the themers — and the next bits popped out immediately:

Third step: Connect those to other entries in the grid. The first two are apparent, and the third we were given:

Fourth step: Flail more. Could GOLDFISH connect to [60a: Go south quickly]: TANK? [What happens when I try to solve this meta? I ___]: TANK. This one took some lateral thinking, and another nudge, this time from solving pal Jeremy K., to finally light upon:

As the parent of t(w)een and teen children, I generally have generous supplies of goldfish crackers readily apparent in my kitchen, but my mind was really not intuiting this one. But those are our answers: SNAKE, TREE, CRACKER. Thoughts? I feel like I solved this one neither wisely nor too well.

Here’s 67a, who loved not wisely but too well:

This entry was posted in Contests and tagged Peter A. Collins, Peter Collins. Bookmark the permalink.