A GENEVAN puzzle! [Crossword constructor Birnholz’s nickname when he’s representing a group of solvers within a close age range?] Get it? GENEVAN? GEN(eration) EVAN? Hehe. Okay, so maybe that’s a stretch. 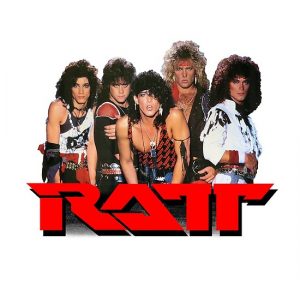 There’s a lot of hair in this band…

Did I get them all? That’s a lot of theme answers! Most were a lot of fun to figure out. If you didn’t know one half of a theme answer, chances were you had an inkling of an idea of the other half and could eventually infer. Names I didn’t know in the themers included MARIAN Anderson, AMBER Heard, and… actually that’s it. For some reason it felt like more during the solve. If I had to do away with one of the themers, it’d definitely be RATTLE ON / RATT LEON. RATT LEON seems like a stretch (probably because RATT was unfamiliar to me as a band name) and RATTLE ON doesn’t strike me as a solid stand-alone base phrase. But, whatever.

There is another layer of something pretty damn cool here: No first names anywhere else in the grid. That’s quite a feat in any puzzle, but certainly in a 21x. I must confess that I was alerted to this elegant touch post-solve and did not notice it myself. Pretty damn cool though.

Had WELTS for WARTS. The correct answer is far more accurate to the clue, even if it’s a bit yuckier. Had no idea that Polk’s middle name was KNOX. And boy did I inexplicably flounder in the Southwest corner for what felt like forever. My time was a few minutes higher than normal, but the bite was enjoyable. 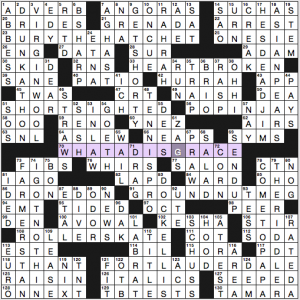 The theme clues complete the puzzle’s title in various ways, with a familiar phrase or word that’s re-parsed to end with a person’s name:

The theme entries were kinda fun to work out. Would’ve been nice to have more guy/gal balance. Can you think of any alternate themers using a woman’s name at the end? Probably there are fewer workable phrases that end with A or I, so that knocks out a goodly chunk of options.

Distracting: Two long Down answers that end with men’s names but aren’t part of the theme: 17d. [“Star Trek” catchphrase said by Dr. McCoy], “HE’S DEAD, JIM” and 73d. [Shade for a field worker?], FARMER’S TAN, which could also be FARMER STAN. Of course, a farmer’s tan isn’t the hue, it’s the pattern the tan takes. Face and neck, and arms not covered by shirt sleeves.

Did not know: 130a. [Actress Taylor of “Bones”], TAMARA. If you didn’t know the name either, take a look at her filmography. You’ve probably seen her in things.

There’s some sparkle in the long fill, and not too much meh-ness in the short fill (DAK OOO YNEZ EDY PDT, meh). Four stars from me. 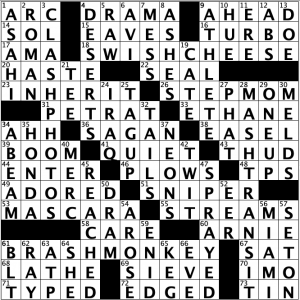 This puzzle was fine. There’s nothing wrong with it, but it also isn’t the most exciting to solve. BRASH MONKEY was my favorite of the theme answers, but they all work. My biggest issue here was grid layout – each themer almost felt like it was part of a completely different puzzle with how broken up the grid is.

Favorite clues today were TPS [“Decorates” with rolls, informally] & HONDA [Fit with wheels?] both of which made me laugh and I’ll take an eBay clue over a gun one any day for SNIPER [Last-minute eBay bidder].

Having TAG UP so near to ONE UP made the repeat of the UP difficult to figure out – especially since I’m unfamiliar with TAG UP. Otherwise, the fill was really clean, but as with the theme, just didn’t do much to excite.

Random solving thought – because of the below clip, I had FOLDS before MELDS [30D. Combines] – for those unfamiliar with Schitt’s Creek, I highly recommend changing that.

This puzzle gets 2.5 stars from me 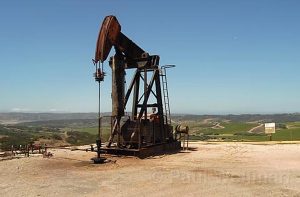 This is a DERRICK.

It’s a familiar theme, for sure. But not unwelcome, and presented consistently throughout the puzzle. New for me was SYSTOLE [Part of a heartbeat], ANNETTE clued as [One of the original Mouseketeers], RICHE [Nouveau ___], and I had no clue what a DERRICK was until now, though the answer was easily inferred. All of those fall in the category of “glad I know that now” (until I forget next time I see them in a puzzle, of course!). I don’t really associate sommeliers with CELLARS. I mean, I get the wine CELLAR reference… but I don’t picture them hanging out in a wine CELLAR. Can’t think of a better way to clue it though.

Otherwise, standard fill which felt a touch heavy on the crosswordese. But this is one of those puzzles that is accessible and valuable to new solvers: it has an easy to grok theme and can teach the ropes of the world of AGARs, ELANs, RAJs, BAHTs, ETTUs, FETEs, and the many different types of letter shaped fasteners… in this case a T BOLT (not the U BOLT I originally entered).

3.1 stars from me. Playful, mostly fun, and simple.

It took me a long time to figure this one out, despite the assistance from the title. Each theme answer has a U substituting for an O. Wackiness results. 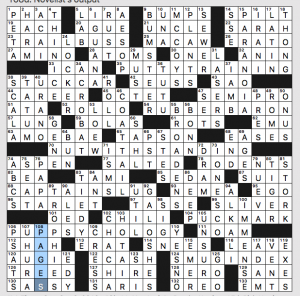 Aside from TRAIL BOSS, all the other phrases are quite familiar and the resulting changes are funny. A good Sunday theme.

What I didn’t know before I did this puzzle: that BONN is on the Rhine. Anyone who has played me in Learned League knows geography is not my strength.