Title: “Square Roots”
Prompt: The meta for this puzzle is a famous roots rock song.
Answer: “Turn the Page” by Bob Seger 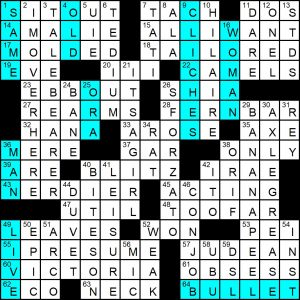 Took a first pass at this one but nothing jumped out. As with so many of Pete’s metas, there’s a lot of nice long fill that may be theme — or may be just masquerading as theme. So here we have I’M OVER HERE, IT’S A GIRL, BANANA PEEL, CON JOB, AXLE GREASE, I PRESUME, ALL I WANT, and SFORZATO. How much of that is theme? To ruin the ending: none of it!

On my second pass I reminded myself that Pete is a math guy so “square” might not be referring to a crossword square, especially since we’ve got “Roots” in both the title and the prompt. So let’s check out all the (mathematical) squares: boxes 1, 4, and 9 spell out SOC, which is promising, but then 16 is a W and 25 is an O so the trail ends there. Just as I’m typing this I’d wondered if I’d found an Easter egg since SOCWO could wind up being letters that anagram into CROSSWORD, but then 36 is an M so there goes that theory (plus the grid doesn’t go up to 81).

What next? Well, how about the words at those numbers? That would be an interesting twist on the idea. SAME at 1-D and then OLD and 4-D seemed promising, but then CLICHES at 9-D. Hmm…vaguely ringing a bell, so let’s keep going: 16-D, 25-D and 36-D are WOMAN /OR A/ MAN. That’s syntactically impressive enough to not be random. Then we have LEAVES and BULLET at 49-A and 64-A.

I Googled “same old cliches” and the autosuggest was “same old cliches is that a woman or a man” and Googling that phrase leads to Bob Seger’s entry in the “song about a musician lamenting life on tour” genre, 1973’s “Turn the Page.” It may seem a bit odd to use two not-quite-connected lyric fragments like that, and then have LIVE (the down entry, not LEAVES at the Across, I soon realized) and BULLET, which is the name of the album (“Live Bullet”) with the most famous version of the song. But Pete probably didn’t want to use any of the words in the title of whichever song he chose since that’d make it guessable, so using two unambiguous fragments from the song was his way to avoid that.

Fun one, and with just 168 correct entries with an hour to go looks like it’s playing tough. 4.30 stars.