This week, we’re looking for a four-letter verb. Well. I was expressing several four-letter words as I tried to solve this meta.

Step 1: See that big marquee entry in the center:

Steps 2 through, like, 14: Be mystified, then spend an hour texting with a friend trying to co-solve. Gently tease said friend for writing a few lines of code to find entries that were one letter off from MLB team names (on the logic that [16a: Name in an Eliot title]: MARNER is one letter off from MARINER and [68a: Regarding]: ASTO is one letter off from ASTRO). Trade sophomoric jokes with friend about BUTT and ASS both being entries clued with [Behind]. Unwisely dissuade friend from following a lead when he suggests that there might be something important in this clue:

Step 15: Give up for the evening. Friend on the west coast goes out for a drink. Me on the east coast has some ice cream and goes to bed.

Step 16: Return to puzzle around lunch on Friday while waiting for the MGWCC to drop. Remember friend’s idea about the clue for 48d. Decide he’s pretty smart after all, and maybe I should “start” at square 61. [61a: Lunate shape]: CRESCENT doesn’t seem relevant, but what if I just start there? Poke around, looking laterally … and … ohhhhh. There it is: Starting at square 61, proceed northeast to the O in DIAMOND. Turn northwest and proceed the same number of squares to the A in COLOMBIA, then southwest to the S in BASEBALL, thence southeast back to the C in CRESCENT. The letters read: 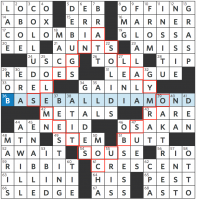 Get it? It’s a baseball diamond! And the first letters of those teams spell out C R A M — CRAM, which is a four-letter verb and our answer. I later apologized to friend for so rudely shooting down his suggestion of there being something important starting at square 61, and there was joy in Metaville.

Clue edit from the Department of Historical Accuracy: