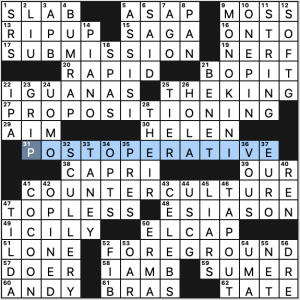 Most of these work well enough, but I find the clue for the first one to be too far-fetched, especially when compared to the others. Cluing with respect to a sub-eating contest might have worked better.

The fill is good and I’ll get to it, but I found myself distracted by the MONOKINI / TOPLESS / BRAS trifecta (and not for the reasons you’re thinking). First off, an entry with a clear prefix (MONOKINI) probably shouldn’t be in this grid given the theme. Second, TOPLESS is clued [Wearing a {MONOKINI}, perhaps]. I had assumed incorrectly that MONOKINI simply meant a one-piece swimsuit, mainly because that’s how the term is used commercially these days. However, it apparently was originally designed to be a bottom-only piece of swimwear for women. Not knowing this threw me off, but I suppose that’s on me. Third, BRAS is clued [Some do push-ups] as if to say a single bra does multiple push-ups. Not only is this wrong, it’s trying way too hard to be cute. Unless you’re someone who wears BRAS regularly, clue it straight and be done with it. In combination, these three clues feel on the verge of obsessive and they are potentially off-putting to a lot of solvers.

There are also some other eyebrow-raisers in there as well. Boomer ESIASON [Boomer born in 1961], the former Cincinnati Bengals quarterback, is probably past his prime as crossword fill. I suppose he is still a football commentator for CBS, but I admit I had to look that up just now. Right below him is EL CAP [Mountain face climbed by Alex Honnold in “Free Solo,” for short]. I had ELCAG at first because I wanted TAG OUT for 46d [Submit, in the ring] (yes, I know that’s clearly wrong now, but I was thinking of tag team wrestling at the time). But I eventually realized EL CAP was short for El Capitan the rock-climbing destination in Yosemite National Park. I don’t know that anyone outside the rock-climbing crowd or Yosemite regulars would ever refer to the rock formation this way, and I predict that crossing will be tough for a lot of solvers. Lastly, UOMO [Man of Milano]. ‘Nuff said.

But there are definitely a bunch of things I do like in the fill like BUM RAP, IGUANAS, THE KING, SCULLERY [Dishwashing room at Downton Abbey], COCOON, the isle of CAPRI, and BOP-IT [Hasbro toy that players twist and pull]. This last was a gimme for me and I’m surprised we don’t see it more in crosswords. As far as I know, Hasbro is still making it. 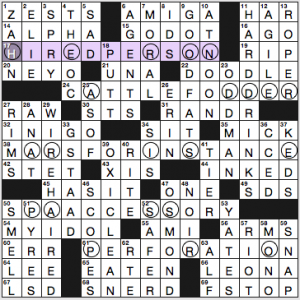 This theme is 30% “the theme answer reads more like a clue for an answer that’s been put in a clue” (a theme type I dislike) and 40% “interpret a phrase literally” and 40% “hide a word in circled squares.” The extra 10% is because of the interplay among those levels. Here’s the theme:

So while the clue-ish themers are innately annoying to me, I forgive them here because I like the gimmick.

THEME: The end of 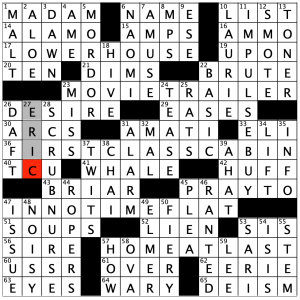 Classic theme here and very well executed. I enjoyed the range of the answers as well as the type of housing they spanned – I particularly loved the clue for MOVIE TRAILER. The revealer works really nicely with this theme and the puzzle itself feels full of theme entries without any sacrifices being made with fill.

Some great fill and clues throughout. The long downs of IMPULSE BUY and SCRUB NURSE were really nice bonuses for the puzzle. I loved the clues for AMMO [Rotten tomatoes, for a tough crowd] and ESE [Tongue suffix]. Really the only crossing I didn’t care for was the ERIC/TCU one at 27D/40A – at least for me these were both answers i wasn’t sure of and crossing them felt harder than the rest of the puzzle. I was very excited to see NAOMI Osaka who has become one of my favorite players & people in the tennis world – and yes this interview left me with tears in my EYES.

The LEE in this puzzle [Stan who co-created “Ant-Man”] was also a very welcome alternative to the clue in a certain other puzzle today. That’s all from me for now- will leave you with my favorite picture of MADAM Speaker 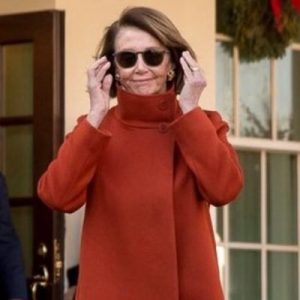 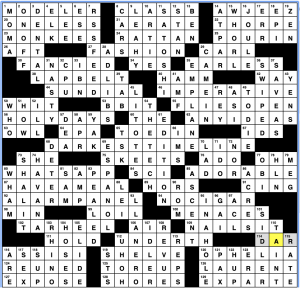 BEQ has a supersized AVCX for us all this week, and the theme’s pretty straightforward, but well-executed:

There’s a dashed clue after each of the theme entries in the grid, which typically means that something is missing and bridging the gaps.  123D spells this out directly — we’re missing the “Timeline hidden throughout this puzzle”, or an ERA.  Using this to fill in the black squares next to the theme entries, we get answers that match their clues: AFTER A FASHION, HAMMER AWAY, WHITE RABBIT, HORSE RACING, MINERAL OIL, and UNDER THE RADAR.

The trailer for the upcoming Taika Waititi film Jojo Rabbit features the German version of the Monkees’ “I’m a Believer” and I’ve had it stuck in my head all week.

A quick dash through the rest of the fill here: 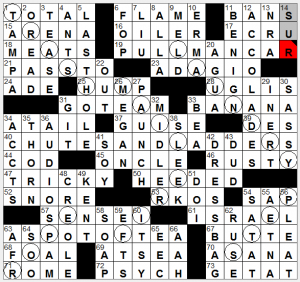 Quick theme recap: CHUTESANDLADDERS (known as SNAKESANDLADDERS here, which makes for much prettier boards) is the revealer and there are 2 triplets of diagonals, one with ___ CHUTE and one with ___ LADDER words. LAUNDRY, MAIL and TRASH are the chutes, and ROPE, FIRE and STEP the ladders.

Diagonals always cause havoc with grid fill… What the heck is AUDIOSPAM, for starters.