We start the autumnal non-contest session of the Fireball with a really nice puzzle. I figured out the trick with the first theme answer and still had to work to suss out the others, which made it even more fun.

Each theme answer has a Greek letter rebus in two consecutive squares; the answer requires the plural. It’s easier to show than to explain. 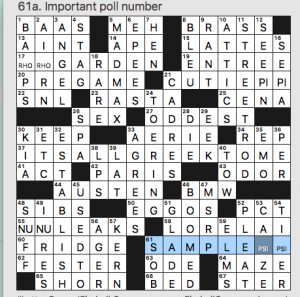 And in the middle, to tie it all together: 37a [“I have no idea what they’re talking about” … and what you might say after solving this puzzle]: IT’S ALL GREEK TO ME.

I really liked this theme. It was fun to solve with four enjoyable “aha” moments.

What I didn’t now before I did this puzzle: that John CENA lost to the Rock in the main event of WrestleMania XXVIII and then beat him in the rematch the next year. The Rock is a local boy: he graduated from Liberty High School in Bethlehem, PA. 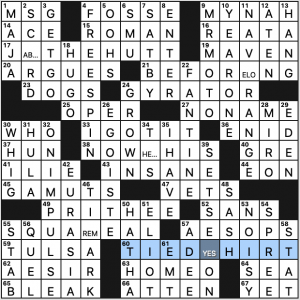 I liked this theme quite a bit. It was surprising and provided a good challenge. I wish there was a little more variety in the bands, but at least they are all crossword staples (except maybe HEART).

And there’s a lot to like in the fill as well: FREE SPIN, MR. MOTO, YEAR ONE, GYRATOR, “I GOT IT!,” ON IMPULSE, EURASIA, FANTINE, EGOISTE, and PRITHEE.

If only something could have been done about that NE corner where fictional proper name REATA [Ranch in Edna Ferber’s “Giant”] crosses foreign god ATEN [Egyptian solar deity]. I tried M and D in that spot before, frankly, just giving up out of lack of interest. Aside from those, other toughies include AESIR [Pantheon of Norse gods], HATHA [Yoga variety], and ILIE [1976 loser to Bjorn at Wimbledon]. But then, it is Thursday and we should be able to get these, at least with a lot of help from the crosses.

Apart from my Natick, this is my favorite Arbesfeld grid in quite a while. 3.9 stars from me.

Greg Johnson is bringing A Game to the Universal puzzle today. Literally.

THEME: Common exclamatory phrases that end with board games.

This totally works! I love that it’s not just simply random phrases ending with board games (board game themes have been done and done). The fact that they’re all colloquial quotes is neat. And neither the title nor any clue in the puzzle itself is a direct revealer, but it’s enough to let the solver have his/her “aha” moment without frustration.

The fill and some clues were pretty damn good in my opinion. My favorite easily being 30D [Boring Tinder opener] HEY. I got that with no crosses whatsoever (it’s totally accurate btw). When’s the last time your favorite clue yielded HEY as an answer? I WANT IT ALL was another fun entry, even though it looks and sounds like it belongs in the theme.

My one tiny nit is 49D [Wrap it up] GIFT. That’s a rare sort of clue where you can’t substitute the answer for the clue itself. Those kinds of clues need exclamation marks. Not only that, but the clue [Wrap it up!] with an exclamation looks way better. Imagine you’re a teacher, and you have a study hall. And there are really bright kids who are bored of school. And you decide to teach the ropes of crosswords. And you emphasize the basic rule that the clue must always be a viable substitute for the answer. Help me out with consistency in curveballs. I’m honestly doing my part (quite successfully!) to spark interest. But publishers need to follow the rules, or my kids lose interest in my unofficial/involuntary crossword elective class that they didn’t know they had, which always turns out to be my favorite class of the day (and theirs).

Okay, one more nit. The phrase is I’LL TAKE MY CHANCES. Not I’LL TAKE THE RISK. But it’s fine.

Overall, this had a modern and lively feel to it throughout the grid. 3.9 stars. 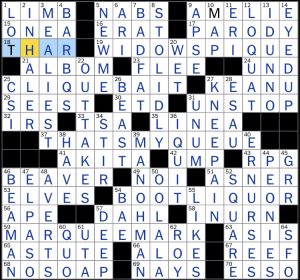 Today’s NYT seems unusually…normal…for a Thursday puzzle.  Maybe it’s an apology for yesterday’s dreadful puzzle, maybe it’s just slightly too weird to run on a Wednesday, but whatever the reason, I liked what was going on here:

This sort of “replace one set of letters with another that has the same phonetic sound” thing has been done before, but that’s a pretty good theme set.  THAT’S MY QUEUE‘s clue made me smile and MARQUEE MARK made me listen to “Good Vibrations”.

A theme like this has a side effect of introducing a LOT of Qs into the grid, and the down fill for these mostly works: BAR-B-QS, LOQUAT, I QUIT, SQUARE, and QUO are all perfectly cromulent, even if I hate that particular spelling of barbecue/BBQ/etc.

Elsewhere in the grid, I liked LIMB, PARODY clued via Spinal Tap, KEANU Reeves, AKITA, BEAVER, INHALER, ER NURSES, and a shout out to “I’ll Make a Man Out Of You’s” choir of BE A MANs in Mulan. 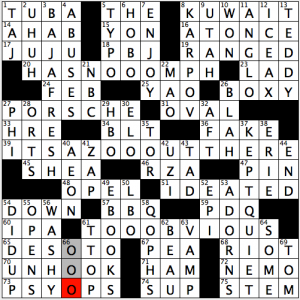 Here, we have three long theme answers containing OOO [“Wheels” in the theme answers that support meals]. On top of those triple-Os are three-letter “meals” — ergo, meals on wheels. Like so:

Solid, though I found it hard not to think of this very similar Brian Thomas NYT puzzle from 9 months ago. That one had the revealer OZONE (which is O3, chemically), but this one has the nice added wrinkle of stacking meals on top of the triple-Os. Goes to show you the difference a puzzle title can make in tying a theme together.

Also thought “UH UH” at 2d was misclued with [“You got that right”]. That clue seems to point to “UH HUH” rather than “UH UH.” Am I missing something? If not, we all make mistakes — no big deal. Still a fun puzzle.