Theme: Certain professionals use common phrases to describe their work. In each case the second word can also be a synonym for “occupation” or “endeavor.” In most cases, but not all, the first word changes meaning as well. 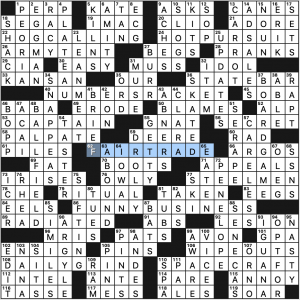 I liked this well enough. There’s nothing terribly exciting here, and some little inconsistencies can be found, but on the whole the relationship between the end phrases and occupations are strong enough to hold the theme together. I especially like HOT PURSUIT; both words change meaning and the end result feels natural. 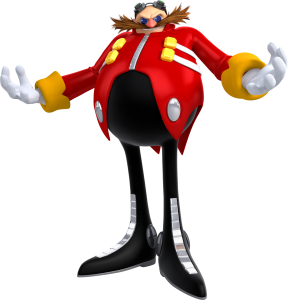 Dr. EGGMAN from “Sonic the Hedgehog”. No relation to John Lennon’s EGGMAN.

New to me are TASSE [Skirtlike piece of armor] and PALPATE [Examine by touch]. I think I would have gotten the former with a [Cup in Cannes] clue (or at least I could have inferred it), and the latter seems like—and apparently is—related to the word “palpitate.”

How are you with your medical crosswordese? I feel like we’ve gotten every scan on offer with ECG, EEGS, and MRIS. I hope you have good insurance.

Cluing was mostly straightforward though there were some highlights like [Spare parts?] for PINS. 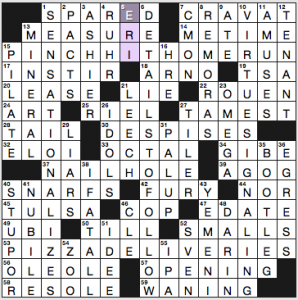 Ugh, no. This is not a good puzzle, and I’m honestly not sure why it was accepted for publication. A matrix of five 15s might be neat structurally, but there is so much dreck in the fill, it just was not fun to solve. And it’s a 68-worder, not a really low word count, so there’s no reason for the fill to be so bad. How do I dislike thee? Let me count the ways: crosswordese/obscure vibe in ARNO, RIEL, ELOI, OCTAL, EDATE, UBI, RUHR, ERI, HRE, CLE; lifeless ASHIER, NAIL HOLE, RESOLE, EGRESS.

One of the 15s is a phrase that is basically a big “fuck you” from conservative types to anyone who espouses any sort of social justice: 10d. [Sharing of a moral viewpoint to gain social approval], VIRTUE SIGNALING. And it’s so hypocritical! Are you not doing exactly that when you carp about them lib’ruls and their virtue signaling? It’s also deeply cynical, as if I can’t say “I support trans and nonbinary folks’ rights to use the public bathroom they’re comfortable in” to express actual support rather than to make people like me for my lib’rul ways. Such a bullshit term, and used so disingenuously. It’s “fresh fill,” sure, but the clue buys into the right-wing framing of the term.

There were some weird clues for crusty old fill that made short entries sort of arbitrarily hard: 5d. [Form of the Italian “to be”], ERI, instead of that crosswordese aria “Eri Tu” / 32a. [“My God!,” to Jesus], ELOI, instead of the crosswordese race from the H.G. Wells novel.

I know that the reclining sort of LIE and the deceitful LIARS are etymologically distinct, but it would be best not to have LIE and LIARS in the same grid. Could’ve made it BEECH/BIO/HMO/partial AM NO and gotten rid of that.

Two stars from me. It just wasn’t fun. 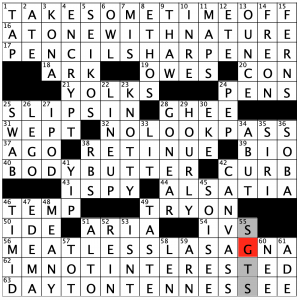 Stacks! We have 15 stacks at the top and bottom of this grid, which is one of my favorite themeless configurations. Like most people, I usually cannot get any of the 15s at first glance, but by parsing through the downs, the answers then become fairly clear. This one took my about 6 minutes, so it isn’t too terribly tough, but still quite a fun solve. I’ve mentioned it before, but I enjoy Greg Johnson puzzles also, so this was a win-win for me! 4.4 stars.

Some highlights, including all of the 15s:

Michigan won’t lose this week: they don’t play! My blood pressure should be good for another week at least! 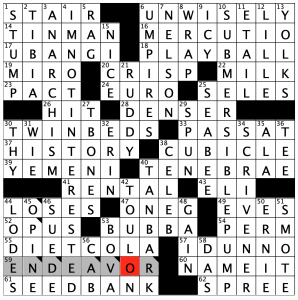 I was going good for about 8 minutes, then I hit the SW corner. You can plainly see the “battle scars” in the grid image (put another way, error marks!). Great puzzle but this duo, which if I remember correctly is Brad Wilber and Doug Peterson. Please correct me if I have that wrong! This one wasn’t as thorny as usual, save for that lower left corner, so next week should be a doozy! 4.5 stars for this one.

THEME: Types of horses can be found within the theme answers

It should be noted that if you didn’t solve in Across Lite, the clues asked you to count letters in theme answers to find the types of horses. Ya’ know, because Universal has trypophobia.

That’s it. 3.5 star puzzle becomes 2 stars for the simple lack of visual aid.