In 2014, Daniel Larsen made history as the youngest person to ever have a puzzle published in the NYT. He was 13 at the time. He’s 16 now and his older sister Anne is an undergrad at Harvard; this is her NYT debut. She’s not even the youngest published constructor in her own family.

I usually do the Friday puzzles on paper and don’t time myself; I did this on the computer and it has to be close to my fastest Friday time ever, if not actually the fastest. It definitely felt easy for a Friday. Overall I liked it; it had a smooth, fresh vibe. I’m guessing that YELLOW VESTS is also making its NYT puzzle debut. 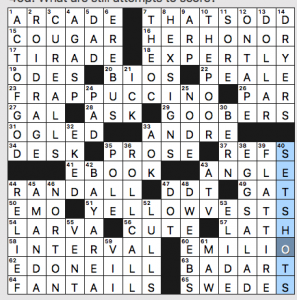 What I didn’t know before I did this puzzle: that BYU athletes are the COUGARS.

So excited to be reviewing this week’s Inkubator puzzle! These puzzles have been among my absolute favorites and this puzzle was no different. 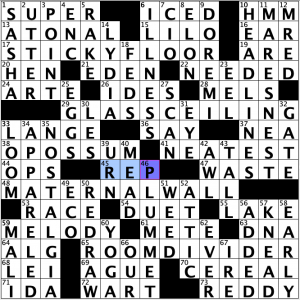 Solving this puzzle was a metaphor for being a woman in today’s world. As a woman, I might find myself going through a day, with so much that is so good and enjoyable and wonderful and then I’ll be faced with a reminder of a way that women are held back. Such was this puzzle -so much that is so good and enjoyable and wonderful, with the theme answers peppered in there pointing out ways women are held back in society. I loved it – it works so well as a theme, while also shining a light on all of these very real issues that women face while trying to succeed. While GLASS CEILING is the most known and discussed of these obstacles, STICKY FLOOR and MATERNAL WALL are very real.

Outside of the theme, LOOK AT ALL OF THESE WOMEN – other editors and constructors please please please take notes – the clues! the answers! This solve took longer than my usual because I had to stop so often to *literally* snap at this puzzle in excitement. For answers we got SASHA Obama, Barbara EDEN, Dorothea LANGE, Ricki LAKE, IDA Lupino, Helen REDDY, LYDIA Ko, and Margaret MEAD. Already so many more women than the average puzzle – but let’s dive into the clues because there’s more! We get a Sally Ride quote for ARE, AOC for REP, Rosalind Franklin for DNA, the Go-Go’s with OUR, and Julie Andrews with DO RE MI.

Another reason I love everything Inkubator is the normalization of periods that came with two of the best clues in this puzzle. The clue for EGGS [Monthly output for some] is one of my all time favorites, and having that in the same puzzle as the menstrually- clued EARLY [Like an unanticipated period, perhaps] was awesome. The more we talk about periods openly, even a mention in a puzzle, or a discussion on a blog, helps to normalize and de-stigmatize menstruation which is so incredibly important. It also gives me a reason to share Michelle Wolf’s fantastic period set:

The only thing I found truly offensive in this puzzle was the clue for 6 across [Chilled, as summer drinks] – some of us are cold brew die-hards who will drink ICED coffee regardless of the season. As always, looking forward to the next Inkubator puzzle!

THEME: The second word in each theme answer is also a word that goes with Bus (this was not obvious… more on that below) 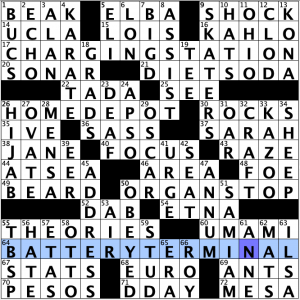 For those who haven’t been to a crossword puzzle tournament, a common piece of advice is to read the title of the puzzle. This is advice I repeat to myself over and over again and immediately forget – it never occurs to me to read puzzle titles.

Reader, why do I mention this? Because this is a beautifully constructed puzzle, with a perfectly good theme that went directly over my head. I spent a long time staring at this grid for trying to figure out what I was missing. BATTERY TERMINAL and CHARGING STATION as grid-spanning electric-related answers made me think there had to be a theme and I was just not seeing it. Finally after an embarrassing amount of time I took a look at the title and AHA! BUS STATION, BUS DEPOT, BUS STOP, BUS TERMINAL! There’s our “Bus Tour” right there. But what I would’ve given for a revealer.

Other than that, this really is a very cleanly constructed puzzle. There is no answer that strikes me as even remotely bothersome or gluey. I got a kick out of SONAR crossing ECHO which made for a great start. Fantastic mix of classic & pop culture in the fill – love seeing The Favourite mentioned in the same corner as Casablanca with ANNE and ILSA, and I’m guessing, gentle reader, you caught my not-so-subtle nod to JANE Eyre above. Throw Frida KAHLO, Idris ELBA, and one of my fav Dr. Seuss books into the mix, and I’m a happy solver.

As usual, I have pretty much nothing but nice things to say about this weekend New Yorker puzzle. This week’s offering is from Elizabeth Gorski, who has given us an entertaining and reasonably easy puzzle, a few tricky spots and clues and one natick aside (looking at you, KAEL/HELOTS). 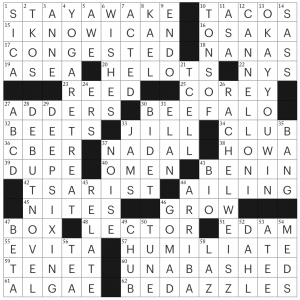 I loved both of the stacks in the NW (STAYAWAKE/IKNOWICAN/CONGESTED) and SE (HUMILIATE/UNABASHED/BEDAZZLES). I particularly like how the first two entries in each stack feel linked — “I KNOW I CAN STAY AWAKE” is absolutely something I have said out loud while working late or trying to finish watching certain political debates that last far too long. Similarly, HUMILIATE/UNABASHED are a nice pairing.The Z’s in BEDAZZLES are just a nice bonus, and didn’t bog down the grid in any way; in fact, they got us the talented RACHEL WEISZ!

The paired 10’s in the SW (DEBUTNOVEL/DEEPSIXING) and NE (CANNELLONI/OKAYYOUWIN) were also well done. DEEP-SIXING is so fun, although I wish it had been clued a little harder instead of literally.  OKAY YOU WIN feels maybe a tad on the colloquial side, but that doesn’t bother me, and in fact I’ve come to expect that sort of in-the-language phrase from New Yorker puzzles.

Overall, this is a well-made, if not overly exciting, themeless puzzle that I enjoyed waking up to.

A trio of made-up grid-spanning sentences comprise our theme today, and each sentence is comprised solely of words that are also articles of clothing. 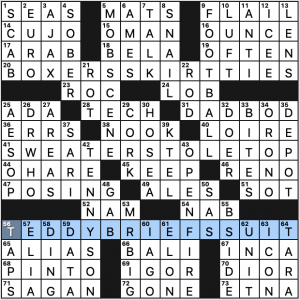 I thought this was pretty clever and it worked quite well. I like that there are only three grid-spanning theme entries thus allowing the grid to breathe while still providing sufficient theme material. Plus, the title is spot on.

If there’s a nit to pick, it’s that TOP is a pretty generic term for a shirt or blouse whereas the others are much more specific.

I think my favorite has to be the last one which contrasts undergarments with a formal suit. That’s good for a chuckle.

As a point of interest, what other words can you think of that have dual meanings as an article of clothing and something else? Offhand, I can come up with JUMPER, SOCKS, BELT, and SHORTS. BOA, of course. Maybe TANK? What else? Can you put them into a funny sentence?

With only three themers, the fill is mostly smooth and clean. Highlights include: MOB SCENE, FOOTBALL, TENNYSON, MR. BIG, DAD BOD (which I’m kinda on the fence on; I think it’s outlasted its welcome), and OPEN FIRE, which gets a pleasant [Wiener-roast need] clue as opposed to something weapon-related. The most challenging entry is LUFT [Lorna ___ (Liza Minnelli’s half-sister)], though the crossings were fair enough. Any other bits of crosswordese (ORONO, ELIA, etc.) are old hat to frequent solvers.

Likable and accessible grid. Four stars from me.

I’m a big fan of the British kids show Horrible Histories (which you can now see on Amazon Prime in the US). It’s an educational show but with a Monty Python sensibility. One of the highlights of the show is their musical parodies. And one of my favorite of their parodies is “Luddites!,” which teaches about the Industrial Revolution…through heavy metal music. And so, when I see a clue like [What Luddites shun, for short], the chorus runs through my brain: “Luddite! Luddite! Luddite! Luddite! Lud-dite!” Full lyrics are here.

This is a fun sound-alike theme with an amusing twist. Each theme answer is a wacky phrase created by taking the R off something more familiar and replacing it with an A. Ish.

And the amusing twist: 56a [Wedding reception highlight … and a feature of four puzzle answers] is the FIRST DANCE. Fun!

What I didn’t know before I did this puzzle: that COGNAC is made from Columbard grapes.