This is Amanda Rafkin’s NYT debut with her mentor and collaborator, Ross Trudeau. Welcome! This is a very nice Monday puzzle and I’m excited to solve more of Ms. Rafkin’s work in the future.

We have three theme answers and a revealer. I figured out the connection partway through, and the revealer made me smile. 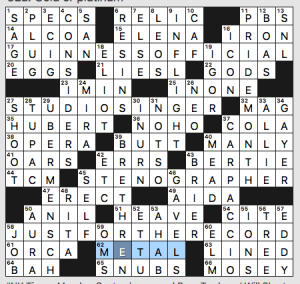 And the revealer: 58a [“To be totally clear” … or why to bring in a 17-, 27- or 45-Across?] is JUST FOR THE RECORD. It would be clearer if the clue was “why one would bring in” but I suspect that would have been too long for the print edition. And that’s a very very small quibble. This is a smooth, solid, accessible Monday theme that was still fun for an experienced solver. Yay for new female constructors! (Don’t bother complaining about “reverse sexism,” which isn’t a thing. Ben Tausig wrote about this problem six years ago. It remains a problem. Ross Trudeau is one of the established constructors trying to increase the diversity of constructors, and this blog heartily supports that effort).

What I didn’t know before I did this puzzle: that ORCA are found in every one of the world’s oceans, and that LA has an Arts District called NOHO.

THEME: Words starting with “de” are redefined as words that have a “de” prefix 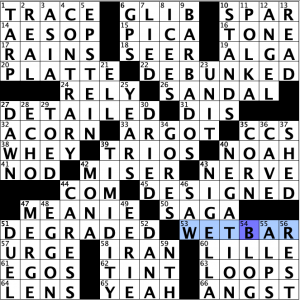 I really enjoyed this theme. Each answer gave made me smile in its clever ridiculousness. DEBUNKED was hands down my favorite clue, but they’re all pretty great. If I had a complaint about the theme, it would be that I wanted more of it – both from a grid side of things as well as just to have more to enjoy.

With such a light theme, I would expect the fill to sparkle a bit more, but there was still certainly enough to like to keep the puzzle moving for me. Being unfamiliar with NIGELLA, I got a little stuck in the SE corner, but I can always find a WET BAR to come to my rescue. The clue for GPS [One may give you directions] kind of works for SEER also so those crossing was fun. And of course Rihanna making an appearance representing BARBADOS is always great in my book.

Final note – as if this theater geek is going to let a Hamilton reference go by- favorite clue of the puzzle goes to DUEL [Event near the end of “Hamilton”]. Here’s Lin-Manuel Miranda at the White House back in the good old days.

Yet another beautiful Monday grid from Zhouqin Burnikel. Her theme is JOB TURNOVER (27d, [Human resources concern, and what each set of circled letters reveals]). Each theme answer (going in the Down direction) includes a hidden occupation circled and going upwards. 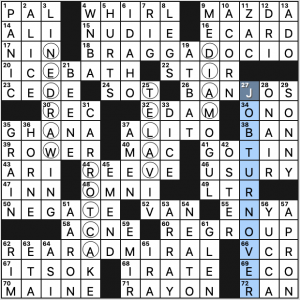 What a lively set of theme answers. All interesting. All solid. I had a ten-minute look to see if I could find any other viable theme answers, and couldn’t find a one. I’m sure there are some, but none that I could find readily available, making this set that much nicer.

Even with those five long theme answers, Zhouqin still manages to provide other fun fill like ICE BATH, REGROUP, REAR ADMIRAL, and my favorite, BRAGGADOCIO. Plus, BANJOS, USURY, YUCCA, and NEATO. Fun stuff.

There’s not much else to say because the puzzle is so clean and smooth. What a great grid to start the week on. 4.2 stars.

This puzzle was a splendid way to kick off a week! The triple stacks in the NW and SE are lovely. I particularly enjoyed the SE, where I initially couldn’t believe I was actually writing in GOCOMMANDO, and then laughed out loud at DESERTRATS. I’ve never heard a gerbil called such a thing, but I can totally see it. This is why I have a cat.

The smoothness of the corners did not quite match the challenge of the middle; the last letter I put in was the H in NOH/HELICES, which I was only 80% sure would work; I can never remember if NOH is NOH or NOE, and I’ve never heard the word HELICE before. MACKERELSKY and THATCHERISM are also new to me, though of course both are completely fair game. I knew MACKEREL to be a type of pattern because of the aforementioned cat, who is a mackerel, so I got there eventually. For the free-market ideology, I started typing in INVISIBLEHA, ran out of space, and decided to jump to a different part of the grid — economics is not my thing. 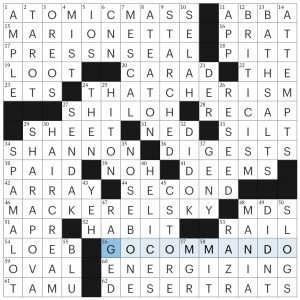 One more thought about the grid: I like this grid layout a lot! Stacks never fail to impress me, and this puzzle not only has the triple stacks in the NW and SE, but also has vertical stacks of almost the same size in the NE and SW. Very lovely bit of construction.

Overall, this puzzle is a standard New Yorker themeless: fun, fresh, a bit challenging, and an example of what themeless puzzles can be when they are held to high standards. 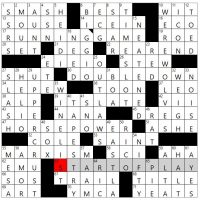 17A: RUNNING GAME [Football non-passing offense] – running play and game play
30A: DOUBLE DOWN [Get one more card for twice the bet, in blackjack] – double play and down play
47A: HORSE POWER [Car engine measure] – horse play and power play
63A: START OF PLAY [Opening kickoff, say, and what both parts of 17-, 30- and 47-Across can be]

Each theme entry can be split in two, with each word being the START OF (first word before) PLAY. I tend to like this type of theme, especially when both of the theme entries lend themselves to the task at hand – it always feels like a nice when you can turn HORSE POWER into horse play and power play, for example. The only themer that didn’t really sing to me was RUNNING GAME, which turned into running play … which feels like the same thing as a RUNNING GAME? I tend to prefer themes where plays on words deviate from the original meanings of the themers instead of duplicating them, which the constructor does well with his other theme entries.

This puzzle felt quite dude-ish, at least in its theme entries, what with all the sports, gambling, and cars. I was almost ready for an action movie SMASH somewhere in there!

Other thoughts:
– Huge props for using the term Latinx in the clue for EAST LA!!!!
– I appreciated the double clue for REAR END as well as the clue for MARXISM. There were also some nice long down entries (WEREWOLVES, UPPERCRUST, TAPESTRY).
– As usual, there were verrrry few women in the puzzle today (NANA, AUNT Em / Dorothy, HEIDI) vs. soooo many dudes. Sigh. We at least have COLE and ASHE to represent for people of color in the grid, but that ratio in puzzles could also be substantially improved.