This week, we’re looking for a celebrity, and given the clues for some of the entries, I suspected who that celebrity might be as I solved. There weren’t any standout longer themers, but there were 10 clues that suggested additional attention, from their tone and grammar, but also because putting in the correct entry leaves you with a blank square: 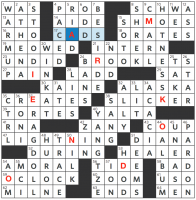 As I’m solving, and maybe it was because I co-constructed a puzzle with this celebrity as a theme, and maybe it was because my house is full of crap and I seriously need to get rid of stuff, I thought — I wonder if MARIE KONDO, famous organizing consultant, is the celebrity we’re supposed to find? But how? I noticed that MARIE KONDO has 10 letters, and there are 10 entries with blank spaces. Entering the letters MARIE KONDO into the blank spaces generates new entries:

These new entries don’t seem to have much to do with the theme of the puzzle, unless I’m missing something, and they produce jibberish in the down entries (HOTNESSK! NILK!). I was wondering, as were a few of my solving pals, how someone would get MARIE KONDO as the answer if they weren’t already familiar with her, and didn’t connect her name to the distinctive Konmari method of divesting oneself of extra crap in one’s house. Solving pal Jeremy K. shared some thoughts in my DMs:

This makes sense to me. As always, I’m impressed by Matt’s technical chops in finding those ten entries and fitting them into the grid, but either my understanding of this theme’s mechanism is incomplete, or it doesn’t quite work completely. What do you all think?